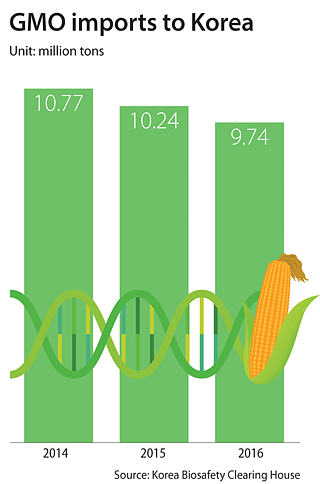 Although genetically modified (GM) food has been around for nearly three decades and has enabled the expansion of food production capacity globally, controversy over its safety refuses to die out. The debate has been heightened in Korea, the world’s top GM food importer, with the public calling for stricter regulation involving GM products.

Kim Jong-hoi, a lawmaker for the People’s Party, proposed an amendment to the School Meals Act on Aug. 23 to prohibit GM ingredients being used in school meals. The amendment also requires schools to prioritize domestic agricultural products. The lawmaker explained the intention of the proposal was to ensure the safety of the meals and promote local agriculture.

The proposition comes amid rising public sentiment that genetically engineered crops can pose a health risk. In June, a television program revealed that nearly half of the top-selling ramen products in Korea are made with GM ingredients, provoking concerns that GM ingredients are being excessively used by food companies. Some of the ramen was reportedly banned from sale in other parts of the world.

After the program was aired, the Ministry of Food and Drug Safety conducted an investigation on the products and concluded that those ingredients have passed inspection and were approved as safe to use.

According to data released by the Korea Biosafety Clearing House, Korea has imported about 10 million tons of genetically modified agricultural products on average for the past three years, making it the top importer of GM produce in the world. Genetically modified corn, used for human as well as livestock consumption, dominated the imports at 8.58 million tons last year alone. Right now, a total of seven agricultural products including corn and beans are approved by the local authority for human consumption.

While the authorities and some importers claim these products pose no health risk as they are approved by the government, some experts beg to differ.

“There are some studies and reports on possible side effects created by GMOs,” said Lee Ki-won, a professor of food and animal biotechnology at Seoul National University. “And although not entirely an issue with GMOs, there has been some controversy involving glyphosate, which is a type of herbicide used when growing genetically modified crops.”

Though some question the validity of the research, a team of researchers from Massachusetts Institute of Technology found that glyphosate could cause autism in children.

There is a growing call for stricter regulations on labeling GM ingredients. The current law only requires a food producer to label their products as using GM substances if the modified ingredients take up more than 3 percent of the entire product. These regulations are much less stringent than other countries. The European Union requires GM labeling for products if they contain more than 0.9 percent modified ingredients. Some countries ban GM ingredients entirely.