It took less than a day for large retailers in Korea to remove eggs from their shelves after the pesticide contamination scandal hit the nation earlier this month. This has left local consumers and restaurants perplexed as they have no substitute for eggs, a key ingredient in many dishes prepared at local eateries as well as at home.

The promise of advances in biotechnology is that one day consumers will have not only perfect substitutes for eggs, but also for meat. The food won’t be expensive, and will have been made in labs without killing animals. The lab-grown products can even offer a solution to environmental issues as greenhouse gas emissions from animal farming are considered one of the key causes of climate change.

According to a report by the Food and Agriculture Organization (FAO) of the United Nations, nearly 15 percent of global greenhouse gas (GHG) emissions come from the livestock industry. 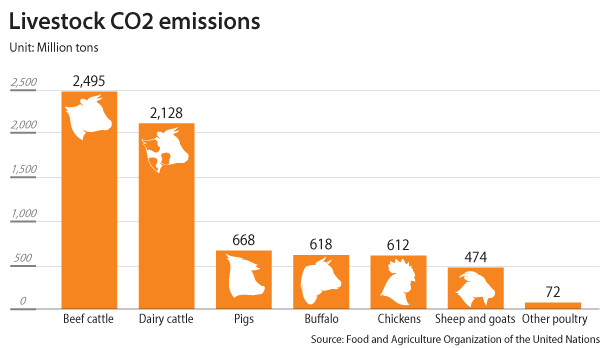 Another report by the FAO pointed out that GHG emissions from livestock “could seriously compromise agriculture’s ability to feed the most vulnerable, impeding progress towards the eradication of hunger, malnutrition and poverty.” The report estimated that, depending on the gravity of climate change, as many as 600 million people may go hungry in 2080.

Climate change isn’t the only factor that poses a threat to global food security.

“Today’s agriculture is at the center of a global trend in which population is increasing and food demand is growing drastically,” said Yong Gao, the director of corporate engagement Asia and Africa for Monsanto, an American multinational agricultural and biotechnology company, and president of Monsanto China.

“Global food demand in 2050 is projected to increase by at least 60 percent above 2006 levels, driven by population and income growth, as well as rapid urbanization,” speculated the FAO.

As it is impossible to fully remove meat consumption, some experts say the world must find an alternative way to produce meat. 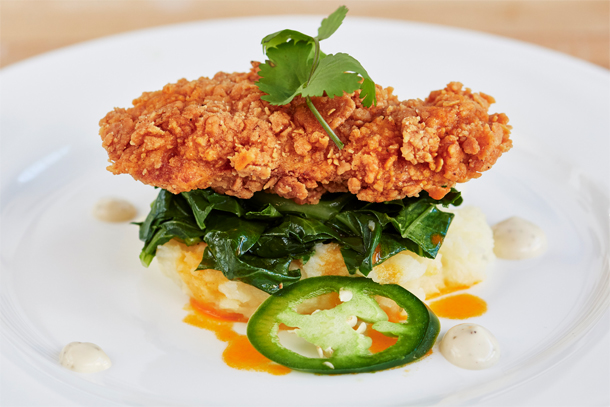 Meat from a lab

Sentience Politics, a political think tank based in Germany, said in a policy proposal that cultured meat, which is produced using the cell of an animal in laboratory, may present a solution to such issues. “Cultured meat seems likely to offer vast benefits in terms of animal welfare, environmental impact and human health,” the policy proposal said.

Other studies showed similarly promising results. A study at the University of Oxford, for instance, suggested that cultured meat generates up to 96 percent less GHG emissions while requiring 99 percent less land than traditional livestock farming.

“Our research shows that cultured meat could be part of the solution to feeding the world’s growing population and at the same time cutting emissions and saving both energy and water,” said Hanna Tuomisto, the leading researcher on the project, according to Oxford University. “Simply put, cultured meat is, potentially, a much more efficient and environmentally friendly way of putting meat on the table.”

“Cultured meat refers to in vitro meat, which does not involve slaughtering animals but obtaining edible meat by culturing cells in a lab,” said Lee Ki-won, a professor of food and animal biotechnology at Seoul National University. “The process involves cell engineering and skeletal muscle tissue engineering.”

One of the pioneers of the technology is Mark Post, professor of vascular physiology at Maastricht University in the Netherlands. In 2008, Post was the first person in the world to present lab-grown meat cultured from the muscle cells of a cow.

Although the technology is still very new, Professor Lee explained that it has undergone a great degree of development in recent years. “The price of cultured meat, which stood at around $325,000 at the beginning of its development, is now about $8 per 100 grams,” Lee said.

One of the leading companies in this newly emerging sector is Memphis Meats, a food technology company based in San Francisco. The U.S. company released meatballs made from lab-grown beef in 2016. In March this year the company also unveiled the world’s first cultured poultry - chicken and duck produced directly from animal cells.

“We start by harvesting meat cells from the highest quality livestock,” explained a company spokesperson. “Then, we identify cells that are capable of self-renewal. We’ve learned which cells give us the flavor, textures and aromas we want. We grow those cells into meat in a clean, safe and nutritious environment.”

The company also explained their products are not vegetarian, as they still use meat, but it has been produced in a laboratory.

The company announced on Aug. 23 that it had raised some $17 million. Notable investors include Bill Gates and Richard Branson, as well as Suzy and Jack Welch and Cargill, one of the largest meat companies in the world. The startup has raised over $20 million to date since it was founded in 2015.

“Memphis Meats plans to use the funds to continue developing delicious products, to accelerate its work in scaling up clean meat production, and to reduce production costs to levels comparable to - and ultimately below - conventional meat costs,” explained the company.

Still, experts say that the industry has a long way to go until consumers will find dishes made using cultured meat on their dining table.

“Cultured meat shows great potential as a substitute for livestock products,” said Professor Lee. “But there are hurdles to overcome. For instance, there are elements other than muscle cells that give meat flavor, such as fat and blood, as well as texture, which cultured meat cannot replicate completely at the moment.”

A substitute for eggs

Finding replacements for eggs is an ongoing problem for the global bio-tech industry.

According to research from Future Market Insights, the global egg-replacement ingredient market will post a compound annual growth rate of 5.8 percent from 2016 to 2026. “The egg shortage crisis due to avian influenza, increasing demand for plant based ingredients and increased cost of eggs are factors expected to support the growth of the global egg replacement ingredient market over the forecast period,” reported the research company.

Hampton Creek, a San Francisco-based food company, was established in 2011 with the intention of providing a plant-based egg replacement. The company has had some success with products such as Just Mayo - an egg-free mayonnaise made with yellow split peas. Hampton Creek received investment from big names around the globe, including Hong Kong multi-billionaire Li Ka-shing and Yahoo co-founder Jerry Yang, and has raised more than $200 million since its inception.

While the company is thought to offer the most viable alternative for eggs, it is currently under fire for possibly rigging ingredients info and violating food safety regulations. According to a Bloomberg report, Target, a U.S. retail giant, pulled Hampton Creek’s products from its shelves across the United States.

The development effort continues in the United States and Europe. However, it’s difficult to spot any dedicated startups or companies working on cultured meat in Korea.

“We cannot find any companies that produce cultured agricultural products in Korea,” explained Lee of Seoul National University. “Technologically, Korean companies could catch up [with the U.S. and Europe], but to commercialize the products, we must consider various factors such as standards on the food safety of cultured meat, production and distribution channels and ethical standards.”

MBG, a Korean bio-tech company and medical device producer, is currently researching lab-grown meat. The company said it is in the phase of muscle satellite cell extraction experiments. 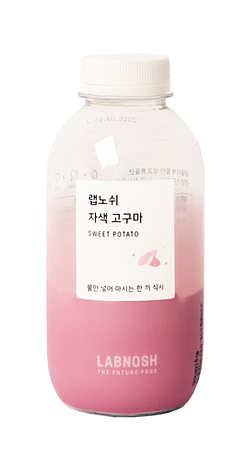 A new kind of meal

While research and commercial development of biotechnology for food is hard to find in Korea, some companies here are trying to present alternate solutions to traditional meals. One local startup decided to bet on meal replacement powders.

Lab Nosh has a line-up of bottled powders that can replace meals when taken with water. Their base is whey protein - an animal protein that can be extracted from the remains of strained milk. Unlike protein shakes or powder, Lab Nosh’s mixture also contains carbohydrate, fat and 20 different kinds of vitamin and minerals, making it adequate for a meal replacement.

CEO Park Chan-ho of Egnis, Lab Nosh’s manufacturer, got the idea from Soylent, a U.S. company that sells protein-based meal replacements. He suggested the idea to the company where he was working but was refused.

“Even after that I still kept following the product’s success in the U.S. and eventually thought the same market demand would exist in Korea and Asia,” he said.

The meal replacement market in the West started four decades ago in the 1970’s. Thompson Medical, founded by S. Daniel Abraham, was one of the pioneers of the industry and introduced SlimFast in 1977. It was first launched as a diet shake product. Since then, the market proliferated and now companies like Soylent are bringing meal replacement products that are not solely made for the sake of dieting but that can be consumed as a full meal. According to some reports, the global on-the-go meal market may grow by more than 7 percent per year in the next few years. The United States is the largest market for the industry, taking up about 50 percent of the global share, according to some reports.

One task Egnis had to work on to sell meal replacement powders in Korea was taste.

“American and European products of the kind don’t concentrate too much on taste - their bigger emphasis is on function. But when it comes to selling food in Korea or Asia it’s different. No matter how functional it is, people won’t take it if it doesn’t taste good. After all, it’s not medicine,” Park added. Lab Nosh’s Blueberry Yogurt, for example, doesn’t taste much different from a yogurt beverage one could order at a regular cafe. There are ten variations in total including green tea, corn and sweet potato.

The company’s goal is to be Asia’s leading functional food manufacturer. In the long run, Park envisions his company developing cultured meat as well, which he sees as the ultimate solution to the food crisis that the world is facing.

Park added that Korea’s protein technology was still too young. “Countries with an average GDP of around $30,000 tend to spend more on easy and quick home meal replacements [like lunch boxes],” Park said. “But if GDP goes over $40,000 like in the U.S. and Japan, people tend to look for ways to lead a healthier and more eco-friendly lifestyle.”