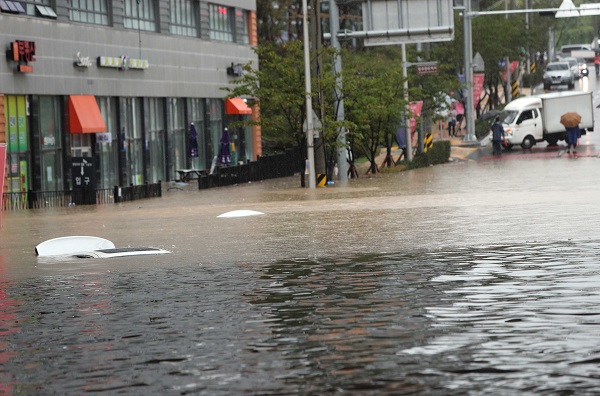 Cars are submerged in Busan as rain swept across the country Monday, most heavily in the southern regions. Busan was the strongest hit, receiving nearly 350 millimeters in the southernmost district of Yeongdo. [YONHAP]

The floods during Monday’s heavy rain were largely caused by malfunctioning drainage pumps and one instance in which a government official forgot to turn the pumps on, the Busan city government said on Tuesday.

“We are investigating the matter and we will find out if the said official failed to do the job or if the pumps failed to drain water quickly because of the sheer extent of the flood,” said Bae Gwang-hyo, director of the citizen safety department of the Busan city government. “If the official is found guilty, the city government will take disciplinary actions. We will also try to come up with a better flood response plan.”

It rained a total of 358.5 millimeters (1.1 feet) in Yeongdo District, 272 millimeters in Daeyeon-dong of Nam District and 258 millimeters in Sinpyeong-dong of Saha District in Busan from 7 a.m. to 11 a.m. on Monday.

“It rained in Busan twice as much as we had initially expected,” said a spokesperson of the National Meteorological Administration’s Busan branch office. “The high temperature and humid winds from the southwest brought the downpour.”

The Busan city government said 549 roads were flooded and 61 houses were damaged. A bus crashed into a car in Geumjeong District on Monday morning, injuring 15. They have been treated at a hospital in the vicinity.

Streets were flooded throughout the city, including near the Marine City residential and commercial complex in Haeundae District, at Wolryun intersection and near Geoje Station in Yeonje District and at Gaya Guldari intersection in Jin District.

“My bus to work stopped moving near Haeundae-ro and I was there for more than an hour,” said a 35-year-old surnamed Kim, a teacher at an elementary school in Dongrae District. “I got to work two hours late.”

The Busan Education Office closed down elementary, middle and high schools for the day. Some parents received the notification messages from the education office late.

“My child, a middle school student, walked all the way to school and came back soaked because they didn’t send me a message about the school closing down until 10:41 a.m.,” said Lee Hee-seon, a 40-year-old mother of two. “They should’ve notified us immediately.”

Around 7 a.m. in a residential area of Geoje-dong, Yeonje, the streets were flooded up to people’s thighs.
Geoje has a drainage pump system that was installed in January, and can drain 3,960 tons per minute.

“The district office got the drainage pumps going only by 8:30 a.m.,” said one Geoje resident.
“Geoje drainage pumps should have worked automatically, but the district office had it on manual mode for some reason, and the official in charge of the system during the rain thought it was on automatic mode,” said an official of Yeonje District Office. “So the pumps were turned on late, and this may be why the flooding was quite severe in the area.”

The Busan city government is also investigating if there were any more human errors in the flooded areas, including with regard to the destruction of three houses in Donggwang-dong, Jung District, which were more severely damaged than others in Busan.

“The flooding at Wolryun intersection may also have largely been caused by a malfunctioning of the drainage pumps there,” said a Busan city government official. Authorities had to manually pump out the water until 9 p.m. Monday.

In Busan, most drainage pipes have been built to take in 66 to 77 millimeters of rainfall per hour, the city government said. More recent pipes built near the newly developed areas, like the Busan Eco-Delta City or Dong Busan Tourism Complex, are able to take in 78 to 95 millimeters per hour.

It rained 109 millimeters per hour in some parts of Busan on Monday morning.
The Busan city government said some 134.5 kilometers (83.6 miles) of drainage pipes are in need of immediate repair, out of the total 8,513 kilometers of drainage pipes in the city. It said it costs some 800 million won ($708,605) to repair 1 kilometer of pipe. But the current budget for pipe reparation, 5 billion won, is enough to repair only 6.25 kilometers.