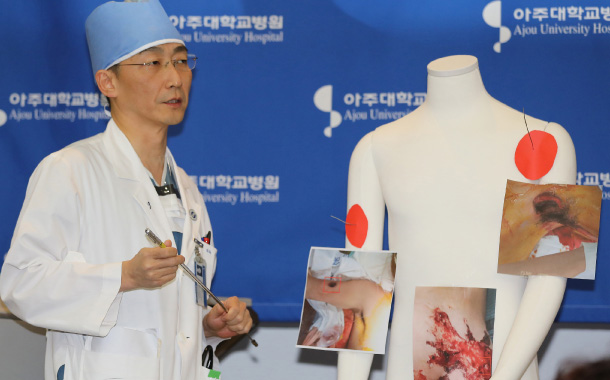 Lee Guk-jong, a trauma doctor at Ajou University Hospital in Suwon, Gyeonggi, explains on Wednesday the condition of the North Korean soldier who defected to the South through the Joint Security Area and received a second operation that day. [NEWS1]

The South Korean military says it considers it a violation of the armistice agreement that North Korean soldiers opened fire at the Joint Security Area (JSA) on Monday on one of their own as he defected.

“This is a violation of the armistice agreement,” a South Korean military official said, “and we plan to lodge a serious protest against North Korea through the United Nations Command Military Armistice Commission [Uncmac].”

In what has been described as a movie-like escape, a defecting soldier swerved in a military Jeep up to a guard post in the JSA, in the truce village of Panmunjom. When the Jeep got stuck in a ditch, he got out of the vehicle and crossed to the southern side of the military demarcation line (MDL) at around 3:15 p.m.

Four of his fellow soldiers fired some 40 shots at him, with at least one using an AK-47 assault rifle. The South Korean military did not fire back.

The wounded North Korean soldier was discovered at 3:31 p.m. near the Freedom House on the southern side of the MDL, concealed in leaves. He was immediately evacuated by a United Nations helicopter to receive emergency treatment.

It is a violation of the armistice agreement to carry an AK-47 assault rifle within the JSA. There is also an investigation into whether the shots fired crossed the MDL.

Uncmac was formed at the end of the three-year Korean War in July 1953 to supervise the armistice agreement. But despite the South’s protest, there is a high likelihood that the situation will go no further, as Uncmac lacks teeth. The North Korean People’s Army boycotted the Uncmac meeting after the United Nations Command (UNC) appointed Hwang Won-tak, a major general of the South Korean Army, as a senior delegate to the Military Armistice Commission (MAC) on March 25, 1991. North Korea only recognized signatories of the armistice agreement as representatives, which the South is not, so it refused to attend any more meetings.

On April 28, 1994, North Korea declared the armistice agreement to be an empty shell, and that MAC exists in name alone, and withdrew its delegate to the commission in Panmunjom. It then unilaterally opened an office of the North Korean People’s Army there as a contact point replacing MAC.

There is currently no communication channel between the two sides. Since the inter-Korean military hotline is defunct, they have to communicate over loudspeaker. It is unclear whether North Korea will even respond to Uncmac.

South Korean Army Col. Roh Jae-cheon, a spokesman of the Joint Chiefs of Staff (JCS), said in a briefing at the Ministry of National Defense in Seoul Tuesday on the presence of an AK-47 rifle, “We plan to lodge a strong protest on North Korea’s violation of the armistice agreement to the United Nations Command.”

The Blue House has not released an official statement on the incident.

“Because this happened in the JSA, firstly, rather than pointing fingers, it’s important to clearly figure out the facts and look at the process,” a Blue House official told reporters Wednesday. “To draw the overall picture, we need to see if procedures were properly taken, so it’s not right for the Blue House to express a position on this,” for the time being.

The Blue House official said, “We will have to see if the armistice agreement was breached.”

North Korea has also been silent on the situation so far, though they were informed by the South over loudspeaker on the condition of the defected soldier.

Following his evacuation by helicopter to the hospital on Monday with at least five bullet wounds to his elbow, shoulder and abdomen area, the defector underwent an operation later the same day. The procedure lasted some five hours.

The defector underwent a second operation at the Ajou University Hospital in Suwon, Gyeonggi, at 9:30 a.m. Wednesday, which lasted three-and-a-half hours.

Dr. Lee Guk-jong, a renowned trauma specialist at Ajou University Hospital in charge of treating the patient, said that the second round of the operation was successfully carried out, including cleaning the abdominal cavity and removing another bullet from the abdominal wall.

However, the patient, he said, “continues to remain in critical condition.”

“An incredible amount of parasites was found in the stomach of the soldier from the JSA, so we are having trouble treating him,” said Lee after the surgery. “We’ve never seen anything like it in a Korean person before, and it can bring about tremendous complications and make a prognosis difficult.”

Lee added that there are so many parasites, including roundworms, that “they are eating away at the wounds.” His small intestine, where he was wounded, has also been infected with parasites.

“Many complications are expected,” Lee said. “It’s a situation that requires a high level of caution because of a long period of shock from hemorrhaging, compared to other patients who received external injuries.”

Medical experts point out that North Korea has a high roundworm infection rate.