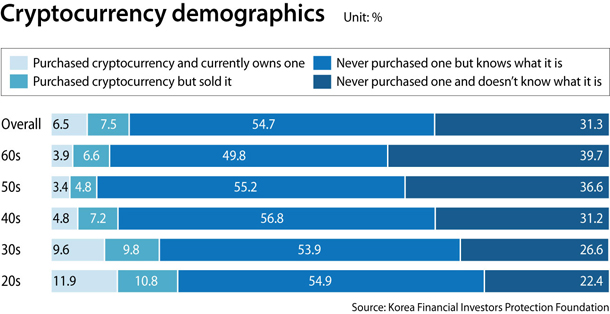 Young Koreans are enthusiastic investors in cryptocurrency, but seniors are getting in on the game too - and more aggressively than the youth.

That is one of the conclusions of a survey by the Korea Financial Investors Protection Foundation that was released Wednesday.

According to the survey, which was conducted last December among 2,530 adults between the ages of 25 and 64, people in their 20s were most active in buying and selling cyrptocurrency. Nearly 23 percent had experience in buying cryptocurrency, while people in their 30s trailed at 19 percent.

The figures for people in their 40s and 50s were 12 percent and 8 percent. For people in their 60s, 11 percent had experience with cryptocurrency, indicating that retirees showed as much interest as their juniors.

But many are concerned that older investors don’t really understand the risks of cryptocurrency.

“There’s a need for older investors to not lose their retirement savings on cryptocurrency investments,” cautioned Kwon.

When that group was asked if they were considering investing, only 7 percent said they would, while those that admitted reluctance accounted for 23.1 percent. People who had no plan of doing so accounted for nearly 70 percent.

The biggest reason holding them back was worries about the hacking of cryptocurrency, accounting for 46.2 percent of the respondents. The second largest reason was the severe volatility of the market, at 31.4 percent.