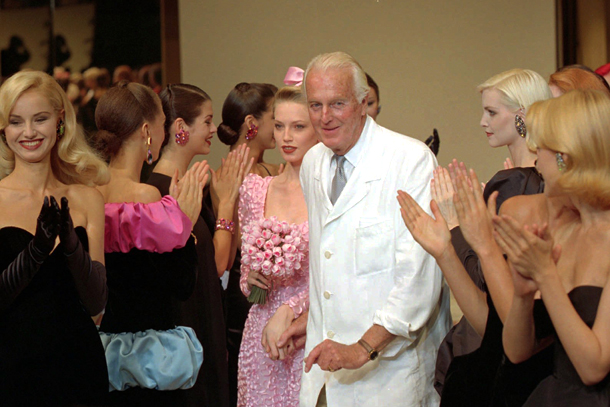 French designer Hubert de Givenchy applauded by his models after his 1995-96 fashion collection in Paris. He has died at the age of 91. [AP/YONHAP]

PARIS - In her sleeveless black gown, with rows of pearl at the neck and oversized sunglasses, Audrey Hepburn’s Holly Golightly defined understated elegance. Hers was the iconic little black dress.

It was the work of Hubert de Givenchy, the French couturier who, along with Christian Dior, Yves Saint Laurent and Cristobal Balenciaga, redefined fashion in the wake of World War II.

Givenchy was the epitome of Paris chic. His death at age 91 was announced Monday.

But none were as close to him or the fashion house that bore his name as Hepburn, whose simple chic became a kind of shorthand for the label.

Besides the little black dress from the 1961 hit “Breakfast at Tiffany’s,” Hepburn wore Givenchy’s designs in nearly a dozen other movies, as well on the red carpet and also in real life.

Born Feb. 21, 1927, in the provincial city of Beauvais, north of Paris, Givenchy was raised by his mother and maternal grandparents after his father, a business executive and amateur pilot, died when he was a toddler.

His grandfather, an administrator of a tapestry workshop in Beauvais, cultivated the young Givenchy’s appreciation of the arts and honed his aesthetic sensibility. 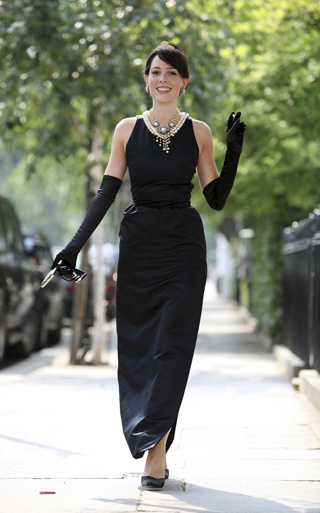 Above: Model Romilly Collins, in 2006, wears the black Givenchy dress made for actress Audrey Hepburn in the classic 1961 film “Breakfast at Tiffany’s.” [AP/YONHAP]

Early on, Givenchy set his sights on fashion - a career choice that left his family cold.

After high school, he acceded to family pressure and joined a notary firm in Beauvais, but it didn’t last long.

Givenchy struck out for Paris in his late teens, in the wake of World War II.

Couturier Jacques Fath hired Givenchy on the strength of his sketches and he spent two years learning the basics of fashion design, from sketching to cutting and fitting haute couture styles.

After a brief stint at the house of Piguet, he joined celebrated Italian designer Elsa Schiaparelli in 1949, leaving her to found his own house in 1952.

Headquartered in a small room off the Parc Monceau, well off Paris’ famed Golden Triangle, the house of Givenchy proved an instant success.

His debut collection ushered in the concept of separates - tops and bottoms that could be mixed and matched, as opposed to head-to-toe looks that were the norm among Paris couture purveyors.

Working on a tight budget, Givenchy served up the floor-length skirts and country chic blouses in raw cotton materials normally reserved for fittings.

The collection’s body-conscious shapes created a sensation among the fashion press and buyers used to the wasp-waisted, full-skirted “New Look” pioneered by Dior.

Givenchy’s “Bettina blouse” - a concoction of white broadcloth with tiers of eyelet ruffles at the sleeves, which was named for his favorite model and publicist, Bettina Graziani - would go down in fashion history.

In 1955, Givenchy relocated to the tony Avenue George V, across the street from his idol, Spanish-born designer Balenciaga.

“Balenciaga was my religion,” he told fashion trade publication Women’s Wear Daily in 2007. “There’s Balenciaga and the good lord.”

“Le Grand Hubert,” as he was often called for his 6-foot, 5-inch frame, became popular with privileged haute couture customers, among them Gloria Guinness, Wallis Simpson and Empress Farah Pahlavi of Iran.

But the client whose name would become almost synonymous with the house was Hepburn, whom he met in 1953, when he dressed her for the romantic comedy “Sabrina.”

Legend has it that Givenchy - told only that Mademoiselle Hepburn would be coming in for a fitting - was expecting the grand Katharine Hepburn. Instead the diminutive Audrey showed up, dressed in simple cigarette pants, a T-shirt and sandals.

That encounter marked the start of a decades-long friendship that saw Givenchy dress the star in nearly a dozen films, making her the brand’s de facto ambassador and forever linking the two together.

Aiming to reach a wider market, Givenchy launched a line of upscale ready-to-wear and accessories in the 1960s, and its commercial success soon enabled him to buy out his backers, making him one of a handful of Paris couturiers to own their own label outright.

Just last week she showed her latest collection in Paris, revealing a brooding and gritty side with razor shoulders and hulking coats.

Givenchy will be remembered as a pioneer of pure lines and flattering elegance - an aesthetic summed up in the motto he shared with Balenciaga: “Make it simple, make it pure.”