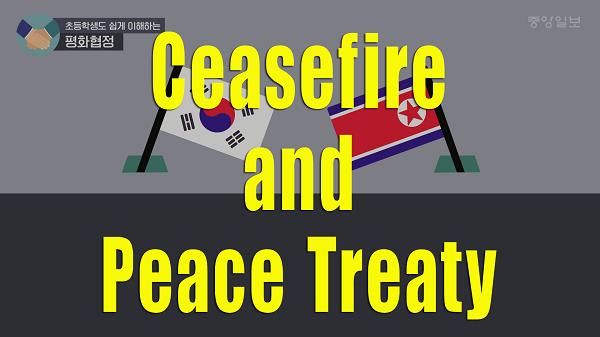 1) “A ceasefire and a peace treaty? Isn’t that the same thing?”

4) Kim Hee-jin is a teacher at Seoul Siheung Elementary School and at the Seoul Metropolitan Office of Education’s Institute for the Gifted.

5) Q. What’s the difference between a ceasefire and a peace treaty?

6) “’The inter-Korean summit may discuss replacing the ceasefire agreement with a peace treaty.’”

7) “’Will the peace treaty finally replace the truce?’”

8) “These are some of the headlines you must be seeing a lot lately.”

10) “If you look at just the literal meanings of the words, a ‘ceasefire’ just means ‘ceasing war,’”

11) “and ‘peace’ means ‘having a good relationship without fighting,’”

12) “so you might think the two are practically the same.”

13) “However, these are two very different things for the Korean Peninsula.”

15) “First, a ceasefire agreement is an accord where two sides who are at war agree to stop their fighting.”

19) “Since then, the Korean Peninsula has been in the state of ceasefire,”

22) “The peculiar thing about the armistice arrangement is that it’s not exactly a state of war, but not a state of peace, either.”

23) “Under this arrangement, North or South Korea can begin war at any time, without needing a declaration of war.”

24) “The 1953 ceasefire agreement was signed by China, North Korea, and United Nations Command (led by the United States),”

25) “but South Korea still called for unification by force and refused to sign the agreement in the end.”

26) “So, in other words, South Korea was not a party in the agreement.”

31) “and bring real peace to the Korean Peninsula.”

32) “A peace treaty is a treaty made for the termination of a war and restoration of peace.”

33) “If a peace treaty is signed, we would not only be freed from the psychological tension,”

34) “but would also be able to save some political, social and military expenses”

35) “which have been spent in preparation for a war that could start again any time.”

37) “by replacing the current armistice system with a peace system.”