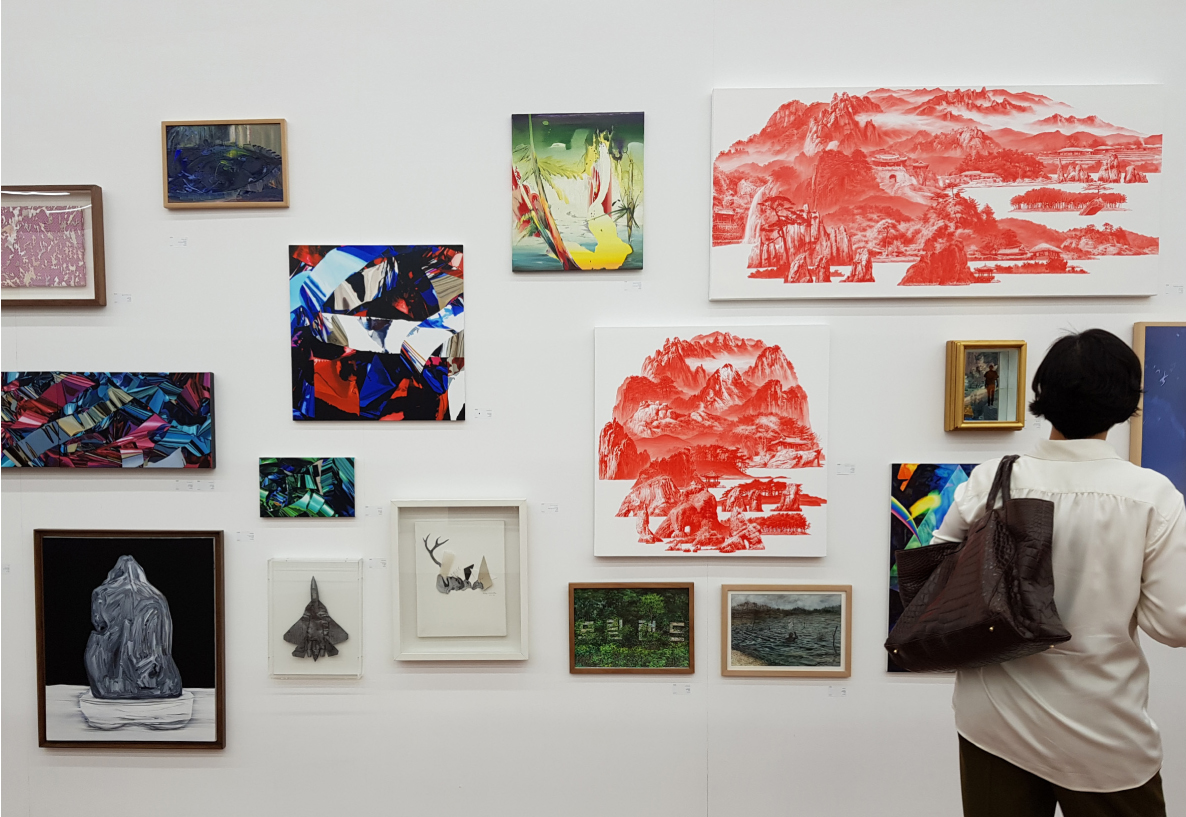 A visitor to the Union X section at the Union Art Fair, a unique art market operated by artists, looks at paintings on display. [MOON SO-YOUNG]

The third edition of the Union Art Fair, a unique annual art market directly operated by artists, started at the S Factory cultural complex near Sungsu station in eastern Seoul on Friday and runs through Oct. 7.

The fair overlaps with the Korea International Art Fair (KIAF), Korea’s biggest art event, which will be held from Oct. 4 to 7 at COEX in southern Seoul. The young fair’s ambition to both supplement and compete with the prestigious KIAF, which is operated by the Korea Gallery Association, reveals a growing art community in the country.

In accordance with the ambition, the quality of the artworks and installations at this year’s Union Art Fair have greatly improved from it’s first edition. In particular, the Union X section on the third floor, which features 180 artists, might be a gold mine for collectors who are strapped for cash.

The works in the section include those shown in major museums’ exhibitions such as artist Leehaeminsun’s frottage series and the 2014 SongEun Art Award finalist Sujin Do’s installation work that satirizes the contemporary art market. In the section are also abstract paintings by artists attracting attention in local and Hong Kong markets such as Ji Keun-wook and Kim Young-hun and some famous artists’ works including Sea Hyun Lee’s “Between Red” series. These works are offered at relatively low prices, because the pieces don’t include the commission fees for galleries.

On the other hand, works by 134 artists in the main section of the Union Art Fair on the first floor vastly vary in quality. The section features mainly young and lesser-known artists who offer their works at 2 million won ($1,800) or lower under the guidelines of the Culture Ministry and the Korea Arts Management Service, which sponsor the fair.

“We started this art fair to provide a platform for younger artists, most of whom have serious difficulties in finding ways to sell their works,” Dusu Choi, 46, an artist and the director and co-planner of the fair, told the Korea JoongAng Daily at the opening of the fair on Friday.

“As the government began to set the 200-million-won upper limit on the prices from this year’s edition, the artists who want a higher price and, instead, are ready to pay 30 percent of the price to the Union Art Fair fund, offer their works in the Union X section.”

“We want to make this art fair a festival as well as a normal market,” said Lee Wan, 39, an artist who co-represented the Korean Pavilion at the prestigious Venice Biennale in 2017, and co-planner of the art fair.

Meanwhile, KIAF organizers say they are ready to show an upgraded edition this year, applying more rigorous screenings to participating galleries and having the world’s major galleries as participants including America’s David Zwirner, which joins the KIAF this year for the first time.

“Paris-based couple and co-founder of the DSL Collection Sylvain and Dominique Levy have jointed the KIAF 2018 Operating Committee,” said Lee Hwaik, head of Leehwaik Gallery and chairman of the gallery committee said in a press meeting last month.

“This and the participation of David Zwirner shows the growing importance of Korean collectors in the world art market.”

A total of 174 galleries from 14 countries will participate in the KIAF 2018. They include Hyundai, Kukje, Gana Art, Arario, Hakgojae and PKM from Korea, Pace from the United States, Perrotin from France, Inoue from Japan and Massimo De Carlo from Hong Kong.