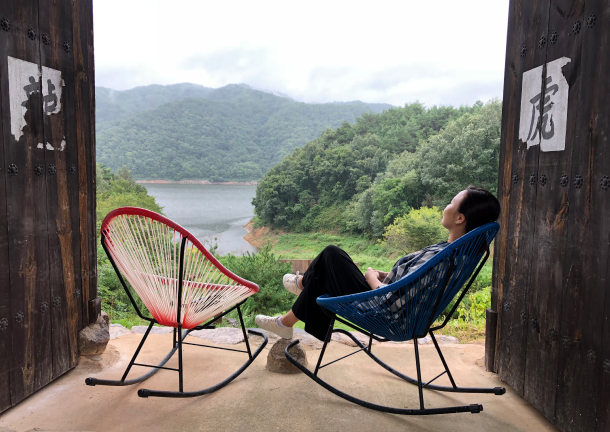 A visitor to Jirye Art Village, known for the river in front and low hills in the back, has been popular among those looking for quiet time with family and a place to take photos with a scenic view. [LEE GWI-JUN]

ANDONG, North Gyeongsang - Home to a fair share of Korea’s historic and traditional culture, Andong is ready to show a different side of itself to the new groups of visitors visiting the city thanks to its role in the TV drama “Mr. Sunshine,” with actor Lee Byung-hun.

Some scenes were filmed at Manhyujeong, a traditional Korean pavilion located in the city. Those looking to recreate the romantic moment they saw in the drama are already making plans to visit the southern city.

To better cater to these crowds, Andong, where many families still live in traditional Korean homes called hanok that are well over 100 years old, is making adjustments to become more appealing to visitors of all ages and cultural background.

Locals who still follow traditions taught to them by their ancestors have long been reluctant to create businesses or tour programs in which they themselves become the content. Many of them come from what were high-class families that followed Confucian teachings in the Joseon Dynasty (1392-1910), when aristocrats and scholars refrained from finding means to make money, but instead read books and sought out ways to serve the country by working close to the king.

But some who have been hesitant about using their family’s history to develop tour programs for those interested in traditional culture have started to think differently and open up to the idea that what they have to share can help spread valuable heritage to the next generation.

To make it easier for families in regions outside of Seoul to get involved in creating cultural content, the Korea Tourism Organization is bringing back dure, a Korean tradition widely practiced in small communities and neighborhoods in which neighbors help each other with their work in the rice fields, to set up better travel system for visitors.

The goal of promoting dure is to help those living in towns that have seen an exodus of young people create steady businesses so that not only locals get to enjoy the unique culture of their towns, but travelers will also get to see something different from urban life. 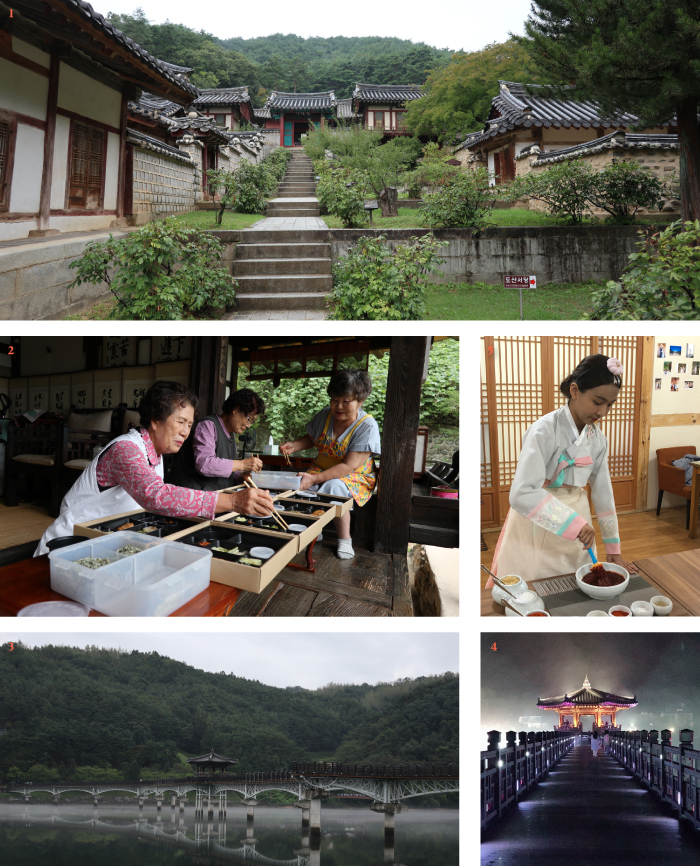 1. Dosan Seowon, one of the most frequently-visited spots in Andong, is a library where scholar Yi Hwang used to teach students. 2. Members of head families of their clans prepare lunch boxes with food made by following recipes handed down in the family. 3-4. The Woryeong Bridge, a great place to take a photo and go for a nighttime stroll. 5. At Andong Banga, visitors can try making gochujang, hot pepper paste. [LEE SUN-MIN]

Andong Seoroga is a cooperative made up of five homemakers from families that perform jesa, traditional rituals, and other family events.

They put together different recipes that their families have enjoyed over centuries and make lunch boxes made with local ingredients. Chives marinated with bean powder, and cotton-candy-like dried fish are some of the delicacies one can find in the meal prepared by the family.

Visitors who want to get their hands dirty can visit Andong Banga. Located next to Gurume, a traditional Korean style resort, there is a studio-like building where one can make their own makgeolli, fermented rice drink, or gochujang, hot pepper paste.

You can take home what you made to remember your time in Andong. Right next to it is Andong Sikseon, another cooperative that works more like a cafe and a restaurant to serve food and drinks.

Jirye Art Village, which once was a residence for visiting artists, was one of the first attractions to open its door to young visitors. The founder’s son has turned the home into a hanok guesthouse, and while he believes that those who want to experience traditional culture shouldn’t mind being a little uncomfortable during their experience, he was willing to make some adjustments.

Of course the bathroom area is located away from the room visitors stay in and the floors loudly creak. But since the son took over the space from his parents last year, he has decided to focus on promoting something that only Jirye Art Village can offer: a view. 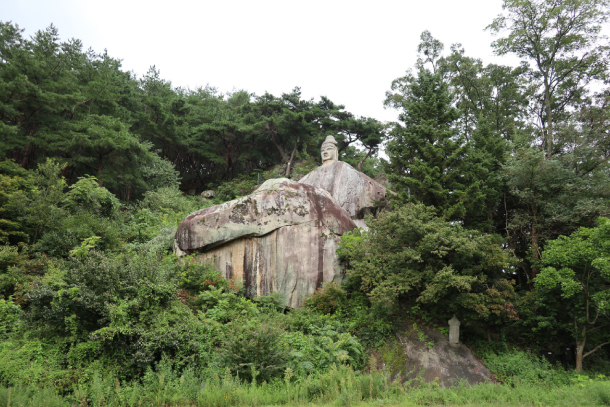 Jebiwon, National Treasure No. 115, is a stone statue of Buddha, which is said to make wishes come true. [LEE SUN-MIN]

Located in the middle of a low hill right by a river flowing out of Imha Reservoir, the house is located in a perfect location that traditional Korean home owners have long favored - a river in front of the home and a mountain behind.

The room’s view looks over the river, which is surrounded by many green trees, and visitors have started taking photos of themselves peering out while still under a blanket.

The photo has been recreated many times and shared on Instagram as more people start to come.

The hill behind the house is not difficult to walk up, and from there, visitors can get a perfect view of the house’s roof, which blends well with the river in front.

For those who prefer to walk on flat land, Woryeong Bridge is a must visit spot. The bridge is over a water reservoir, which often creates mist, causing a mystical scene to behold. The bridge is popular among locals and visitors going out on a night time hike. The bridge is lit up at night and on weekends there is a water fountain show three times a day for about 20 minutes each time.

To make it easier for visitors to get around, there is now a transportation service in the city called Busro. Its office is located right outside Andong Station and the company offers those who cannot drive the opportunity to see different things around the region in a short amount of time.

Depending on what you’re looking for, you can choose to do a full-day tour or a half-day tour in the morning or afternoon.

The half-day tour usually takes about four hours, hitting major visitors’ destinations like Dosan Seowon, where a prominent Korean Confucian scholar taught his students, or Bongjeong Temple, which is known to have been built during the Goryeo Dynasty (918-1392), about a thousand years ago, or Hahoe Village, Andong’s famous Unesco World Heritage Site.

The service also takes people to Jebiwon, where a carved stone statue of the Buddha stands. The statue is classified as the country’s National Treasure No. 115. Some say if you make a wish in front of the statue it will come true.

“Some excellent spots are looked over as not all travelers have a car to drive in the area, especially young people,” said CEO Lee Hee-o, explaining why his service is necessary. To learn more about the itinerary the service offers and to make a reservation, call 1661-0416.