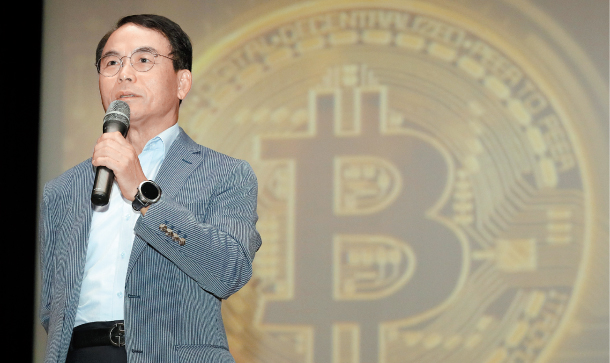 The head of Korea's leading blockchain association said that the government can create new jobs and boost the economy if it allows start-ups to issue ICOs (initial coin offerings) and rolls back regulations on cryptocurrencies.

“The government should implement guidelines to nurture the domestic blockchain industry, which will help Korea emerge as a global industry leader," said Chin Dae-je, the chairman of the Korean Blockchain Association, during a seminar co-hosted by the association and other blockchain supporters at the National Assembly Library in Yeouido, western Seoul, last Tuesday.

Chin, who has served as the Minister of Information and Communication as well as the head of Samsung’s digital media division, argued that gains from encouraging qualified businesses to engage in blockchain-related activities would far outweigh losses if proper guidelines were implemented.

“Start-ups who comply with guidelines should be allowed to launch ICOs [initial coin offerings],” Chin said. He presented a set of blockchain guidelines proposed by his association at the seminar.

Last September, the Financial Services Commission imposed a blanket ban on all ICOs in Korea, accusing them of being risky and prone to scams.

ICOs are rising as a popular fundraising tool across the globe. For an initial coin offering, a start-up issues its own blockchain-based digital coin to individual investors, who pay for them in existing cryptocurrencies like bitcoin. The idea is that investors will be able to use the new coins to purchase products once they're eventually launched by the start-ups doing the fundraising. More commonly, however, investors buy the coins in hopes that they can trade them in and profit on cryptocurrency exchanges as the coins appreciate in value.

“By regulating and allowing ICOs, we can nurture start-ups with high potential, create jobs and reduce youth unemployment,” Chin said. “We can designate public or private organizations like the Korean Blockchain Association to look over the ICO white papers and verify the purpose of their fundraising.”

Chin also called for the government to make it easier for cryptocurrency exchanges to issue new virtual accounts, which users need to deposit or withdraw Korean won from the exchanges' websites to purchase cryptocurrency and convert it back into normal currency.

Most banks are hesitant to get involved in anything related with blockchain without the government's approval, so they are staying as far away as possible from cryptocurrency exchanges. Currently, only Bithumb and Coinone among domestic exchanges can issue new virtual accounts.

“The government should allow currency exchanges that verify customer identity and have appropriate security measures to be allowed to issue new virtual accounts,” Chin said. “Korean exchanges that were ranked as the fourth or sixth-largest in the world before are dropping to below 20th place now.”

“If domestic currency exchanges disappear, it will be more difficult and financially challenging for Korean start-ups to issue ICOs as they would have to list their coins on non-Korean exchanges,” he added.

Chin also took the opportunity to propose the term “digital token” as a replacement for "virtual currency" and "cryptocurrency."

“The term virtual currency is inaccurate because it implies that the coins don’t exist, when that's not the case," Chin said. "Cryptocurrency also doesn’t work because it implies that the coins are cryptic or mysterious, which is not what we want the government to think. I recommend we use the term ‘digital tokens,’ which reflects their true nature and practicality.”

“We cannot completely close the door on ICOs,” said Min. “The government needs to promote the blockchain industry by cooperating with the National Assembly and blockchain associations to curb scams, speculation and money laundering.”

“Even though I work at a traditional financial firm, I believe blockchain will become increasingly significant as we enter a new hyper-connected era,” said Hanwha Securities analyst Kim Yeol-mae, who also gave a presentation at the seminar. “Soon, companies will fight each other over personal data like countries now fight over oil.”

“Blockchain technology is a way to block mega firms like Google from monopolizing data. It is a comprehensive technology that holds not only technological, but economic and social significance as well,” Kim added.