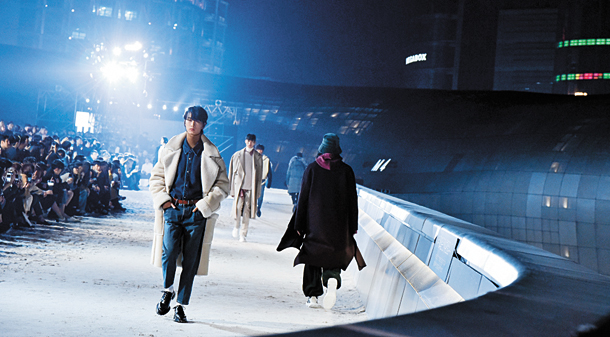 Hera Seoul Fashion Week 2019 S/S held its opening show on Monday at the Dongdaemun Design Plaza (DDP), central Seoul, kicking off the week-long event featuring next year’s spring and summer collections. The biannual event, which will run through Saturday, is once again being held in various locations across Seoul including its main venue at the DDP, where 42 designers and brands will have runway shows.

Hera Seoul Fashion Week chooses an honorary designer each year to celebrate their efforts in developing the Korean fashion industry. This year’s honor went to two designers: Woo Young-mi of Solid Homme and Park Choon-moo of Demoo. Woo’s Solid Homme opened up the week with a show titled “Solid/Beyond 30,” celebrating its 30th anniversary by looking into the future of menswear.

The opening show was held outdoors at the DDP, which were transformed into a sandy landscape “influenced by the Vietnamese region of Mu Cang Chai,” according to the designer. A total of 100 outfits were featured in the show, with trendy and classical designs that could be worn by people in their everyday lives, and also some experimental outfits that challenges menswear conventions.

Things really began to heat up on Tuesday, with both onsite and offsite shows taking place across different times and places, starting off with designer A.Bell’s show. 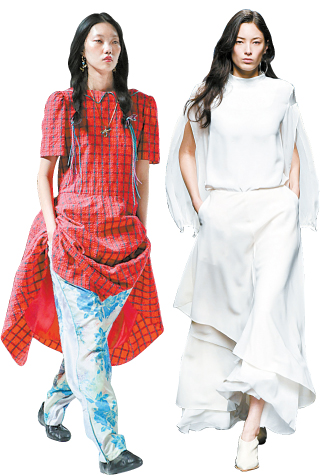 A model for The Centaur; A.Bell [HERA SEOUL FASHION WEEK]

The event organized for the second honorary designer also began on Tuesday. Park’s exhibition, “From Moo” will take place until Nov. 4 at the DDP Design Pathway, displaying avant-garde outfits by designer Park, who has always pushed the envelope of high fashion in Korea. “The showcase will provide an opportunity to experience various styles which contributed to the advancement of Korean women’s high fashion culture for the past 30 years and styles so popular they led to the creation of the phrase ‘Demoo style,’” said the organizer.

An exhibition has also been organized to feature works by younger designers with fresh ideas. The “Seoul’s 10Soul” exhibition in the DDP will feature outfits from 10 brands for the 2018 fall/winter season that were chosen as highlights from last season’s fashion week. The exhibition, curated by renowned stylist Seo Young-hee, features some promising brands such as J Koo, Blindness, Push Button and D-Antidote. The brands will also open a pop-up store at the select shop Opening Ceremony in New York.

Young fashionistas took to the DDP grounds all week despite the cold spells that hit Seoul. A gigantic digital screen has been set up inside DDP so that people who couldn’t get a ticket to the show that wanted to check it out can also enjoy the designs as models strut down the catwalk.

For those who can’t make it to DDP, the Hera Seoul Fashion Week offers a live broadcast through various platforms, including the fashion week’s official website, Naver V-Live and DongA TV.