A taste of Korea, from hotels to the streets: For the annual Korea Grand Sale, restaurants are offering major deals

A taste of Korea, from hotels to the streets: For the annual Korea Grand Sale, restaurants are offering major deals 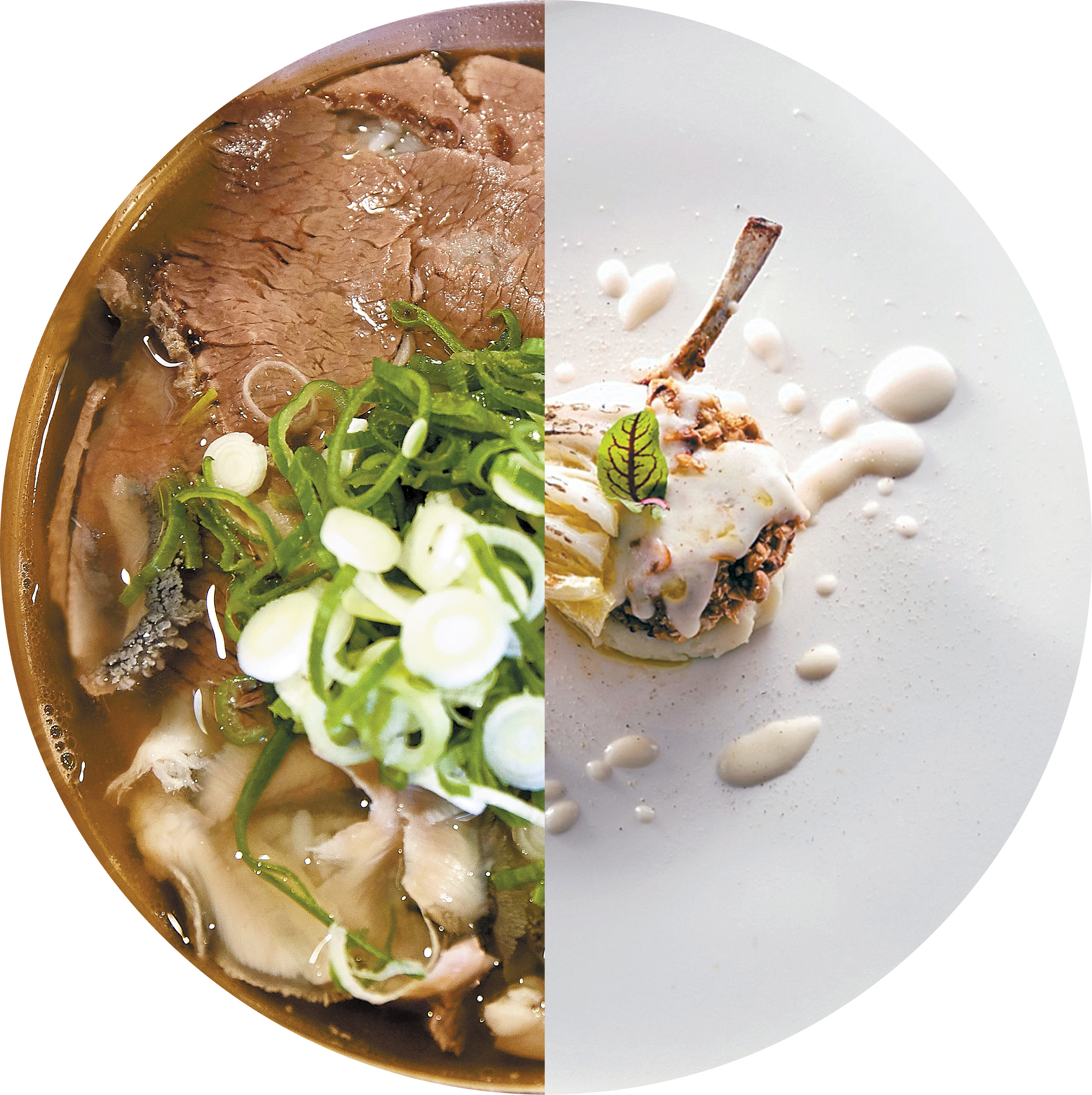 Shopping becomes more fun when you know you have an event or a place to go to while wearing your fresh new outfit and looking your best.

The Korea Grand Sale is the country’s largest shopping event for foreign visitors which not only provides a chance to buy discounted clothing and accessories, but is also an excuse to enjoy a luxurious dining experience at major hotel restaurants in Korea on a budget. The 10th edition of the annual event kicks off on Jan. 17 and runs until Feb. 28.

The Grand Sale also provides visitors the opportunity to save money on hotels, airfare and transportation throughout the country, in addition to discounts at amusement parks like Everland in Gyeonggi and Lotte World in southern Seoul and attractions like the Grevin Museum in central Seoul and the Korean Folk Village in Gyeonggi.

What’s getting the most attention this year is Korea Grand Tasting, which the Visit Korea Committee set up in time for the 10th anniversary of the major shopping event. The tasting event offers those with foreign passports a chance to get discounts at restaurants located inside major hotels often used by travelers in Korea. Over 70 hotel restaurants will provide up to 25 percent off of the original prices to make visitors’ trips fancier than ever.

A guide on classical-style Korean restaurants whose facades have their own rustic charm is also available for those looking for unique dining experiences away from their hotels. The Visit Korea Committee has made booklets in Korean and English, providing a brief history of these restaurants, including Woo Lae Oak, which serves popular Pyongyang-style cold noodles called naengmyeon alongside bulgogi, grilled marinated beef, as well as how their main dishes are made, in order to help foreign visitors learn about the food that’s served in some of the country’s most popular restaurants. 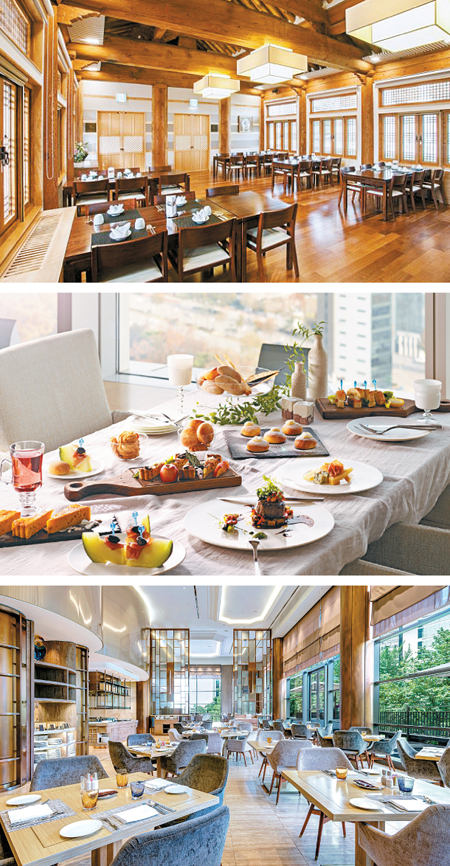 From the top: Sura at Gyeongwonjae Ambassador Incheon which serves Korean food in buildings inspired by hanok, traditional style houses; A tabletop set up at the Sky Lounge at InterContinental Seoul Coex.; Millenium Seoul Hilton’s buffet restaurant Cafe 395. [EACH HOTEL]

The Visit Korea Committee held a vote last month to see which restaurants travelers would want to visit the most out of 70-something hotel restaurants participating in this year’s event. The No. 1 choice was Cafe 395, a buffet at the Millennium Seoul Hilton.

The buffet restaurant, which serves a non-stop flow of grilled lobster and Korean-style barbecued beef, offers a 15 percent discount for those who dine there on weekdays and 10 percent off of the bill for those who eat on weekends. The buffet has a made-to-order ice cream station where a chef mixes your toppings inside the ice cream of your choice on a cold stone board to help you finish your meal on a sweet note.

The Gyeongwonjae Ambassador Incheon outside of Seoul rounded out the top three restaurants. One of the few Korean restaurants available at a hotels, Gyeongwonjae, which has buildings inspired by hanok, traditional Korean houses, serves a refined style of Korean food. Diners can take advantage of a 10 percent discount during Korea Grand Tasting.

Other hotels, such as Le Meridien Seoul and Sheraton Seoul Palace Gangnam in southern Seoul, Courtyard by Marriot Seoul Namdaemun in central Seoul and the Grand Hilton Seoul in western Seoul offer discounts in the capital city.

The Lotte Hotel Busan and The Westin Chosun Busan also offer promotion to those visiting the southern port city, while the Stanford Hotel and Resort in Tongyeong, South Gyeongsang, is also offering more affordable dining options for visitors. Jeju Shinhwa World and Haevichi Hotel and Resort are some of the hotels on Jeju Island participating in the event as well.

From the top: Beef being grilled at Cho Sun-ok, a restaurant known for its beef barbecue in central Seoul; A window at Cheongjinok in central Seoul provides information about its available dishes; Noodles being rolled in the kitchen of Woo Lae Oak, popular for its Pyongyang-style naengmyeon, or buckwheat noodles in cold broth. [ROH CHUNG HUN]

On Jan. 18, a local chef will lead a group of foreign visitors to Korea to restaurants that have been running for multiple generations in central Seoul. Chef Park Chan-il has been writing stories about these restaurants, including their histories as well as the daily routines of people who have worked there over the decades. His work is to remind locals of how some restaurants spend years to master one or two dishes. Example of restaurants with history that visitors should check out are Woo Lae Oak, which is known for its cold noodles and bulgogi, as well as Hadongkwan and Cheongjinok, which are known for their versions of beef soup with rice.

These places are often called nopo in Korean, meaning a store that has been running for generations.

Hadongkwan, open since 1939, has its own jargon one must use to place an order. Besides the normal and big bowls, the restaurant offers 20 gong and 25 gong - dishes that go for 20,000 won ($18) and 25,000 won. The more expensive your bowl is, the more special the beef. The pricier dishes are likely to include intestines and more. There is also a “whole chicken” on the menu for only 500 won - here that means raw egg. The restaurant explains that in the past, when people didn’t have many options to get extra nutrients, they would add a raw egg to the bowl to make their beef soup more nutritious.

Another word often used at the restaurant is naengsu, which normally means cold water in Korean. An order of naengsu will get you a beer glass half-filled with soju.

In the cold weather, you are likely to quickly drink up the warm broth of your soup, leaving just the beef and the rice behind. But here, you can always ask for a refill on your broth if you would like some more.

The beef soup is clear without any hot peppers, but if you want to, one trick to make it spicier is adding a type of kimchi water. Ggakdugi, a type of kimchi made with white radish in a spicy sauce, is served here and many add some to their soup after they have enjoyed the first half of the dish with clear broth.

Cheongjinok is another spot known for its soup. Here, the broth is spicier than what you will find at Hadongkwan. What’s served at Cheongjinok is called haejangguk, a soup boiled with the jelly of cow’s blood, beef and intestines along with some vegetables. The soup became more available in Seoul during the rapid economic rise of the country. Many workers who worked night shifts needed something to fill up their stomachs in the morning, and those who had a couple glasses of soju wanted a bowl of hot soup to cure their hangover, according to chef Park. The word haejang in haejangguk means hangover cure, and guk means soup.

With more attention being given to modern Korean restaurants featured in international magazines as well as restaurant review entities like The Michelin Guide, spots that serve classic Korean-style food have begun to get the spotlight thanks to people who want to find where modern Korean food gets its roots.

Locals have sought out these places more than ever in recent years, which naturally led international visitors to become more interested.

The fact that The Michelin Guide, which started to review restaurants in Korea in 2016, has recommended some local-style Korean restaurants, including Pildong Myeonok and Myeongdong Kyoja, shows that restaurants with history are worth visiting.

“Since Korea has rebuilt many streets and areas filled with old-style restaurants to make cities look more modern, there are not that many areas that both locals and foreigners can go to trace the roots of Korean food from decades ago,” said Park, adding that consumers nowadays are more interested in learning about the history of the food they eat.

“So now, restaurants that have been around for a long time have become destinations to visit and learn the history of Seoul, as many of them use dishes they have been using for decades.”

The Visit Korea Committee accepted applications and chose 20 foreign visitors who will join the tour with Park. But don’t worry if you have missed your chance to eat with Park - you can still get a special gift when you share your dining experiences at five traditional restaurants in Seoul from Jan. 17 to Feb. 28.

You need to eat at two of the five suggested places - Cheongjinok, Hadongkwan, Woo Lae Oak, Cho Sun-ok, and Yeolchajib - and then share your photos on social media with hashtags #KoreaGrandSale and #OldResetaurant.

When you show your posts to the Visit Korea Committee’s Korea Grand Sale Event Center by Gwanghwamun Station, line No. 5, exit 5, you can take home a special gift. The gift will be given to the first 200 foreigners to visit the center with their posts.