Stars shine again on YouTube, or seek a second chance: The freedom creates opportunities for those with talent or tales

Stars shine again on YouTube, or seek a second chance: The freedom creates opportunities for those with talent or tales 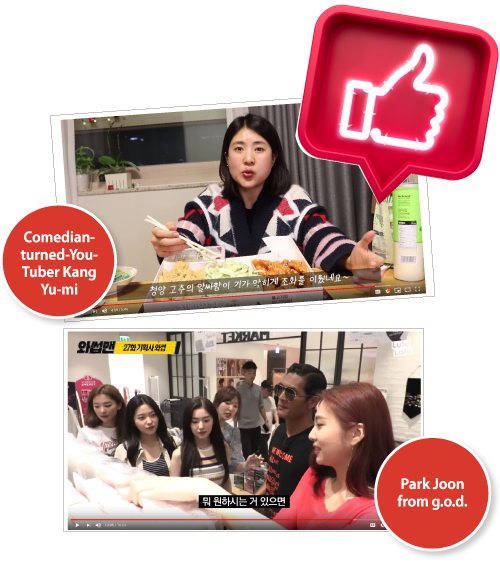 YouTube is undeniably the world’s biggest video-sharing platform today. Everyone is free to join, free to express whatever they want, free to communicate with anyone - and earn money at the same time. According to a report by digital media research company Nielsen Koreanclick in June last year, around 25 million people - that’s half the total population in Korea - access YouTube through their mobile phones every month.

This also explains why already-established celebrities are heading toward the platform themselves. From K-pop stars to comedians and actors of different ages, a number of Korean celebrities have opened their own YouTube channels recently to engage in active communication with their fans. Unlike in television, where they are stage-managed to behave in a certain way, celebrities on YouTube are free to share their talent without anyone’s permission, while receiving direct feedback from their viewers. Through YouTube, many celebrities are now enjoying a new heyday. 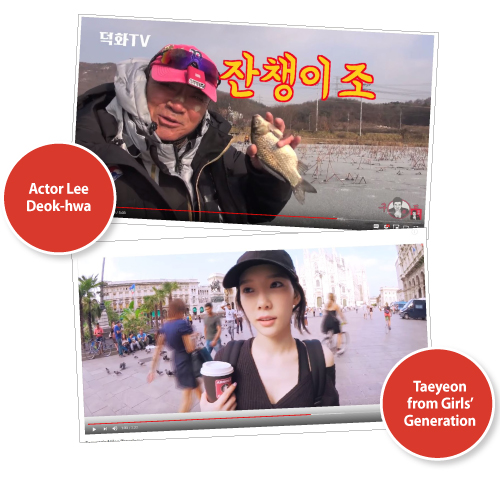 Looking for Trouble to Wassup

In a recent report released by media marketing agency Nasmedia, Park Joon from boy band g.o.d., owner of YouTube channel “Wassup Man,” was chosen as the No. 1 Rising Star on YouTube. His channel had the largest increase of subscribers among all Korean YouTube channels newly created between November 2017 and November 2018. Many of the channels on the top 10 list were those owned by celebrities, including K-pop singer Yoon Bo-mi from girl group Apink (No. 6), trot singer Hong Jin-young (No. 7) and actor Shin Sae-kyeong (No. 10).

A spin-off of JTBC’s reality series “Looking for Trouble” (2017-18), “Wassup Man” currently has over 1.7 million subscribers and includes videos of Park introducing hot places and activities in Korea, such as visiting Gyeongbok Palace wearing a hanbok or checking out hot cafes recommended by locals. What makes his videos more appealing is his funny and outgoing personality. He easily approaches strangers in the streets (“what’s up?”), uses unique expressions and phrases (his “Baam!” is now a buzzword) and is honest about reviewing food (if a cake tastes bad, it’s bad).

Park is 51 years old this year, but he knows exactly how to communicate with the young.

“We show someone who’s half a century old without hiding anything, but at the same time, we try to keep a connection to the millennial generation through editing and subtitles,” he said during an interview with Ilgan Sports - an affiliate of the Korea JoongAng Daily - in August last year.

Singer Yoon, better known as Bomi, owns the YouTube channel “Bbom Bbom Bbom,” which has over 580,000 subscribers. Although she has gained recognition as a member of Apink - since 2011 - it was not until recently that she stood out as a talented individual artist through her channel. Her videos are mostly about her daily life - putting on makeup, enjoying chicken by the river and cooking her own diet recipes.

Actor Shin similarly uses her channel “sjkuksee” to share her daily life. It is mostly about cooking food - making muffins, pasta, bibimbap and peanut butter cookies. Although it has only been three months since she first opened her channel, she already has over 570,000 subscribers.

Some celebrities have found new identities as influential YouTubers.

Entertainer Kim Ki-soo started off his career as a comedian in 2001, but he is now a better-known YouTube star, pursuing “genderless makeup” and sharing it with the public.

“I wanted to show that sometimes guys can do better, sexier makeup,” he told the press two years ago. “[My goal is to] become a cosmetics model and launch my own collection using my name. I also wish to work abroad and spread K-beauty.”

Singer Luna from girl group f(x) owns YouTube channel “Luna’s Alphabet” with over 200,000 subscribers. On it, she is gradually discovering herself with her videos.

“I’m learning makeup for YouTube,” she said during an appearance in MBC’s “Radio Star” aired last month. “Broadcasting is so much fun. Talking in front of the camera alone and answering questions by myself is fun. It’s like searching for my ego.”

Comedian Kang Yu-mi was one of the first celebrities to become a YouTuber. She once appeared in major comedy shows including KBS’ “Gag Concert” and tvN’s “Comedy Big League,” but after she had a plastic surgery, she was the victim of malicious comments and took time off working as a scriptwriter and traveling the United States.

Now she is a YouTuber with over 500,000 subscribers. She uploads “anything that she likes,” from food reviews to ASMR videos.

Although YouTube has been long popular among the younger generation, older celebrities are also stepping into the field. Last month, 68-year-old actor Lee Deok-hwa joined the lineup of Korean stars heading to YouTube and opened “Deokhwa TV,” where he uploads videos of daily challenges, such as eating food alone for the first time.

In JTBC’s reality program “Come to Me,” a show featuring several celebrities making video content, 63-year-old actor Noh Sa-yeon opened her channel “Sixty and the City,” and filmed videos of herself doing K-pop idol makeup. During a press conference in October last year, she mentioned, “I took the challenge in order to communicate with the world.” 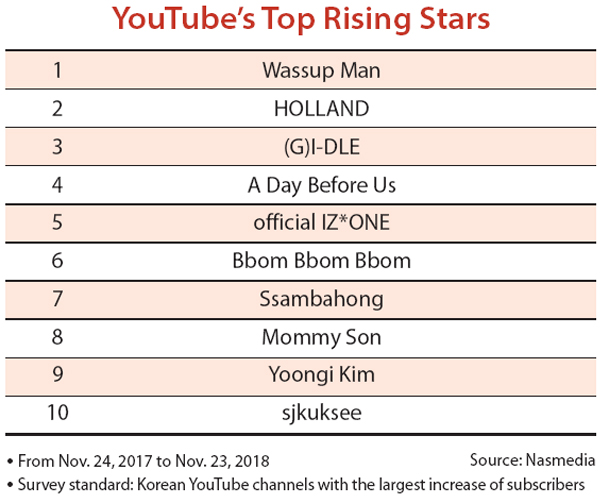 Following trends and establishing them

According to Prof. Lee Dong-gwi of Yonsei University’s Psychology department, YouTube is a means to maintain popularity. The celebrities are simply “following the trend.”

“[YouTube] is more used to communicate with the public nowadays than other websites, like Naver,” he said. “In YouTube, [celebrities] can talk about their daily lives, which may not be easy to talk about on television. They can be honest about themselves and get direct responses from viewers. Also, they are able to maintain their popularity if they have many subscribers because it proves that they are not forgotten. On television, they may only be recognized if, for instance, they release a song that turns out to be popular, but it’s very competitive out there.”

Among the celebrities who have become YouTubers are also those who were once embroiled in controversy. Actor Jo Duk-je, who was previously accused of sexually harassing an actor during a film shoot, recently opened up his “Jojo Duk-jae” YouTube channel, where he uploads videos expressing strong opinions regarding the “unfair decisions” made against him. In 2015, Jo was accused of tearing actor Ban Min-jung’s shirt and placing his hands on her pants while filming a movie. The Supreme Court found Jo guilty of sexual harassment last year, sentencing him to prison for a year. Jo has been challenging the decision online, claiming through his hundreds of videos that what he did was not sexual harassment, but simply acting.

Kang Byung-gyu, a former professional baseball player and entertainer, also recently made a comeback through YouTube after a 10-year hiatus. After retiring from baseball in 2001, he gained fame as an entertainer and host, but in 2008 he was swept up in several controversies regarding gambling, threatening and assaulting other actors and fraud.

Singer Park Yu-chun from boy band JYJ, also announced his comeback to the entertainment scene through a video post on his new “Yuchun Official” YouTube channel. In 2016, Park was accused of sexual assault several times. Although he was found not guilty of all charges, Park had to lay low for a long time due to the damage to his image.

According to a culture critic who wishes to stay anonymous, there are two main reasons why such celebrities may want to return through YouTube.

“It’s understandable that some of them may feel as if they are falsely accused and they may want to express their own opinions to the public. Also, these celebrities may fear being forgotten.”

While many may not be pleased to hear of their return, culture critic Jung Duk-hyun believes this is not the key issue. According to Jung, one must first understand the nature of the new media.

“The new media is moving toward mobile phones. Previous mass media giants - most representatively, TV networks - are now losing strength. YouTube is about personal media. Viewers can freely choose to watch or not watch the videos. Whether or not such celebrities make their comeback through YouTube does not cause any trouble to us because whether to care about them depends on the viewers.”