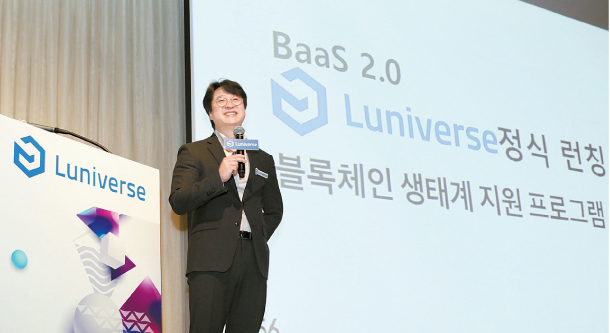 The Luniverse platform will help IT companies or start-ups develop blockchain-based services that they lack the resources to set up on their own.

It offers cloud-based solutions to build, host and maintain a blockchain. To widen the variation of maintenance services, Dunamu partnered with external companies that can provide different blockchain apps and solutions according to the client’s business field, like health care or games. Such outsourced services are known as blockchain as a business (BaaS) services.

Lambda256, which used to be Dunamu’s blockchain research center, will overlook Luniverse’s operation. On Tuesday, it spun off from Dunamu in order to focus on developing the Luniverse business from now on.

Blockchain is a new kind of database. Unlike traditional databases that store all information on a single computer or server, data on a blockchain is simultaneously stored across multiple computers. This decentralized system means that a blockchain cannot be changed without the agreement of the majority of the computers on the network, making it essentially immutable.

“In the past, a lot of companies built their own blockchain, but an alternative is outsourcing the establishment of a blockchain in the form of a service offered on cloud systems,” said Park Jae-hyun, CEO and former research head of Lambda256 in a press conference held Tuesday in Gangnam District, southern Seoul.

BaaS services offer easier and more intuitive tools to build a blockchain rather than companies starting from scratch. Building and maintaining a blockchain requires trained experts, which are often hard to find, and huge costs.

Seven start-ups that built blockchain-based services using Luniverse will launch next month. Among them is snowMakers, which aims to build a transparent database of contracts in the entertainment industry, and Ziktalk, a foreign language tutor app that supports faster payments via blockchain tokens.

Lambda256 started developing the Luniverse platform in May 2018 and released blockchain software in September last year that can be downloaded for use on companies’ own systems.

The upgraded service released Tuesday operates on the cloud and has more intuitive development tools, a higher level of security and an automated scaling function that can adjust the blockchain’s size according to the amount of data saved inside.

Lambda256’s ultimate goal in offering the platform is the expansion of blockchain usage in the country. Public interest in blockchain rocketed when cryptocurrency prices were at their height in Korea last year. But as bitcoin prices dropped, so did the general interest and hype in the technology.

Under the same initiative, Lambda256 said it will also launch a blockchain app market this year where the general public can access its services and a blockchain solution market where clients can purchase solutions to implement on the service.

The services are intended to help blockchain-based companies by providing them with a distribution channel and to facilitate their development process, which Lambda256 hopes will ultimately lead to the expansion of blockchain in Korea.

“Our ultimate goal is to grow into the Amazon of blockchain by 2022,” said Park.