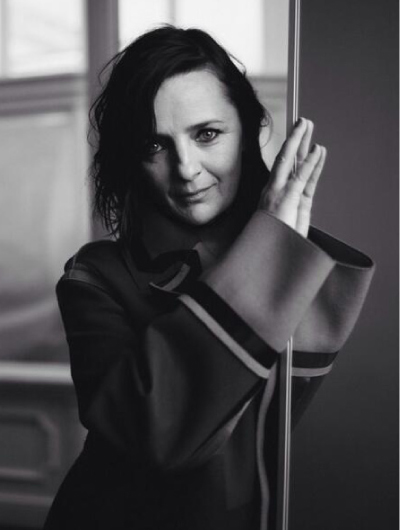 The debut of Cottweiler, an award-winning menswear line, at Seoul Fashion Week last Friday was a big deal for both the British and Korean fashion worlds. It marked the beginning of an exchange program that promises to jump-start the international careers of young designers from the two countries.

Yvie Hutton, who looks after London Fashion Week’s schedules and business development programs as head of membership and designer relations at the British Fashion Council, flew to Korea to witness the landmark occasion herself at the 2019 F/W Seoul Fashion Week.

The Korea JoongAng Daily met with the fashion insider on Sunday to discuss her expectations for the exchange program and thoughts on Seoul Fashion Week. The following are edited excerpts from the interview.

Q. Why was Cottweiler chosen to come to Seoul?

A. March is much easier for men’s brands because they’ve already shown in January, while for women’s they’ve just shown in February. A lot of women’s brands travel at this time of the year to do trunk shows. So we thought men’s would be the best way to kick it off and we were excited to support one of our amazing brands.

What was your impression of Cottweiler’s show on Friday?

We all had a little laugh about the speed of the models. We’ve noticed here that the models walk quite slowly in comparison and so the guys [Ben Cottrell and Matthew Dainty] were saying ‘Walk fast, walk fast.’ But there was one [model] that was very fast and he was basically running.

What’s the goal with the exchange program?

Where does the Seoul fashion market stand today?

Seoul is a really interesting market for British designers and retailers because there are a lot of key stockists here.

In terms of talent, it’s still an emerging market, but there’s definitely some interesting brands here like Pushbutton, Moho, Munn and Blindness.

What are the major differences between Seoul and London Fashion Week?

I think one of the major differences is geographic. Everything is at DDP (Dongdaemun Design Plaza). When you compare that to London, we have [a place] where we showcase all of our emerging talents, but most established brands show offsite in their own venues.

Seoul’s a big city. Especially when you’re coming as an international press or retailer, the key is to make it as easy as possible. The DDP building is also incredible. Everyone loves it. It’s one of [late Iraqi-British architect] Zaha Hadid’s biggest buildings.

Does Seoul Fashion Week have room for improvement?

I don’t think there’s any major things I can comment on in terms of improvement. It’s interesting that men’s brands and women’s brands show at the same time, whereas in London Fashion Week we have a fashion week for men at a different time. I think having it altogether is actually a great idea.

I think it always comes down to the caliber brands that show. [It’s important to] attract supporting talent and make sure that the next generation [brands] are looked after.

Where do you see the fashion industry in 10 years?

It’s difficult to say what will happen. Everyone’s changing to digital. I think the thing that we’ll see the most changing is the press sector. Magazines will be completely digital.

Social media has also had a massive impact on the fashion industry - you can buy straight from Instagram. I think [there’ll be] a shift of brands being direct-to-consumer instead of it being trade-only.