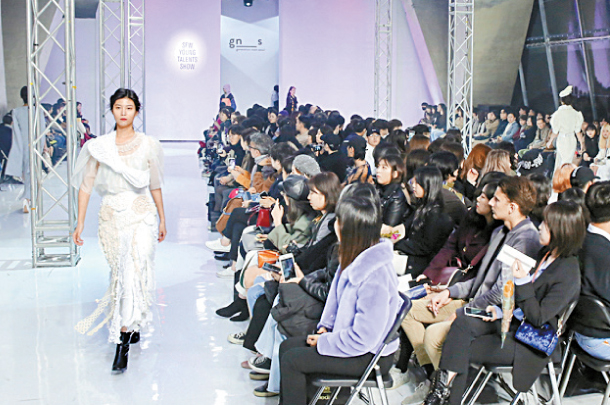 The 2019 F/W Seoul Fashion Week marked an important milestone for young student designers. This year, the Seoul Design Foundation launched the SFW Young Talents Show, selecting 31 promising university students from 15 institutions to offer them the opportunity to showcase their creations on the runway.

Last Thursday night, Dongdaemun Design Plaza (DDP) overflowed with proud friends and teary-eyed parents holding flower bouquets awaiting the beginning of the Young Talents Show. When it was all finally over, the audience applauded the young designers as they walked alongside their models on the catwalk.

Just after the inaugural event, the Korea JoongAng Daily sat down with two of the lucky participants to learn about their future plans and dreams. Park Eun-ok, 25, recently wrapped up her studies at Sungkyunkwan University, and Moon Sung-ho, 27, just graduated from the Samsung Art and Design Institute (SADI) with a colorful résumé that includes working for Münn and coming in first at the 2018 Korea Fashion Design Contest. 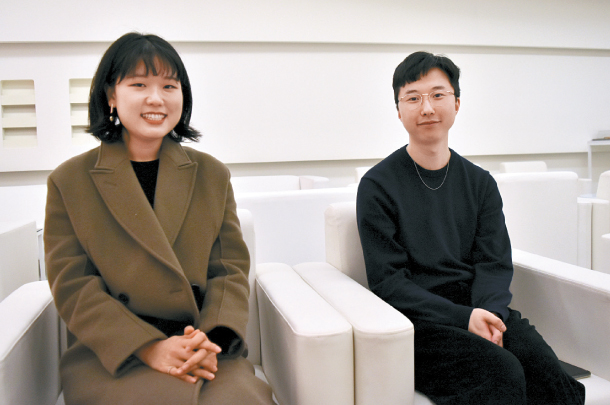 Q.Could you explain your inspiration for the pieces showcased at the Young Talents Show?

A.Moon: I prepared this collection based on my personal experience at the culinary school I attended before going into fashion. I applied a preppy style — representing students — to a chef’s outfit to create a new look.

Park: My concept was ‘genderless.’ These days, the boundaries between genders are disappearing and men and women wear the same clothes. Traditionally, corsets were an oppressive feature of womenswear that tightened the body. So as a critique of that, I incorporated a corset into menswear.

What does the launch of the Young Talents Show mean to you?

Moon: It’s really difficult to do a show immediately after graduation. Overseas, especially in London, there are several shows in which recent graduates can participate. As a student in Korea I was really envious of that. But this new program is a really good opportunity and I was really happy to participate.

Park: I agree. The Seoul Fashion Week itself is meaningful and it’s really difficult for designers resource-wise to host a show here. Earlier, fashion week director Jung Ku-ho told us that this program was organized to give us a taste of a real fashion show.

Who are your role models in the fashion industry?

Moon: Rather than older, famous designers, I like to look up to designers in our generation like Wales Bonner and Craig Green who incorporate their unique backgrounds into designs. That’s something I aspire to do as well.

Park: I like minimalist designers like Christophe Lemaire. He doesn’t use colorful patterns, but solid colors that showcase the details well. During an interview, he once said clothes need to be like clothes that can be worn comfortably. 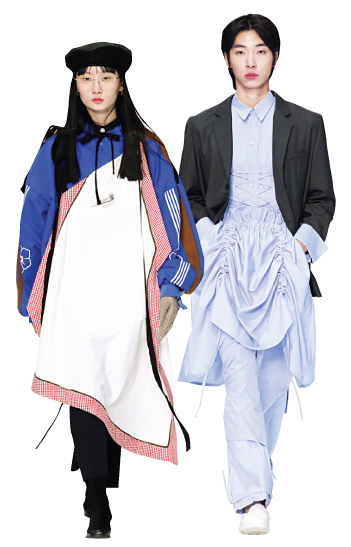 What was the most informative course you took at school and what did you learn from it?

Moon: At SADI, all the subjects in the curriculum are intertwined to help students prepare for their collection rather than being divided into totally separate classes. So basically you’re working on the same project but talking to different professors and approaching it with different perspectives. I was really impressed with SADI’s curriculum itself because it’s really well planned out. But it was stressful and competition was really fierce because the students who didn’t meet standards flunked.

Park: I took this course called Fashion Creative Direction in my last semester where we learned about different media related to fashion like film and photography. This encouraged me to search out creative directors and fashion films, which was a refreshing change from just focusing on clothes.

What do you wish you had known when you entered university?

Moon: Before, I was concerned about not satisfying others or my professors. Korean students are especially cautious around their teachers and treat them as superiors. So when I was in first year, I tried to follow every piece of advice from my professors, but looking back, it would’ve been better practice and training if I was a little more honest to myself. Failures as a student don’t do much damage and there are people who can help. But if I try to be honest now as I prepare to launch my own brand, I can face large losses in costs and time.

Park: I think as students we should try out various activities. There are a lot of student competitions, including ones supported by the Seoul Design Foundation. Using online shopping malls, YouTube and other social media channels to build up your profile is important too because that eventually becomes your portfolio.

Moon: I’m getting ready to launch my own brand at a studio space I acquired at Musinsa Studio with the help of the Korea Fashion Industry Association.

The brand I’m pursuing is called ‘Moonsward,’ which is a name that my English teacher gave me when I was younger. I want to make a brand that has a distinctive image that people can immediately conjure up when they hear the name. But I’m still figuring out what I want to express.

Park: I’m actually not sure whether I should become a designer or a merchandiser. I’m preparing myself to get a job but also taking shots at opportunities like these. If I do launch a brand, I want it to eventually show during prime time at Seoul Fashion Week.