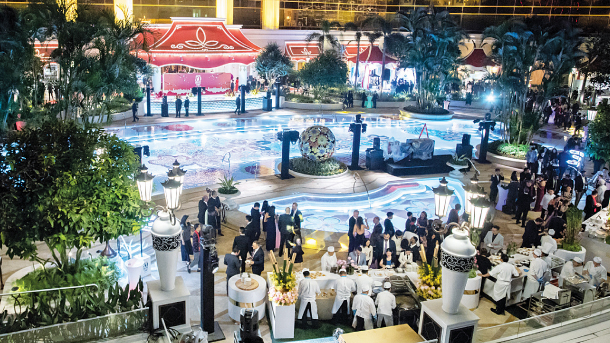 Chefs and culinary experts from Asia celebrate the release of the 2019 edition of Asia’s 50 Best Restaurant List on Tuesday at Wynn Palace in Macau. [ASIA’S 50 BEST RESTAURANTS]

MACAU - Korea’s rise as a culinary hot spot among food aficionados in Asia faced a speed bump this week after a Seoul-based restaurant was dropped from the 2019 edition of Asia’s 50 Best Restaurants list this week. This year’s list included modern Korean restaurant Mingles at 13th place, two spots lower than last year, and contemporary restaurant TocToc at 41 - up one spot. Jungsik, which was ranked 26th in the 2018 edition, has been pushed off of the list.

The No. 1 spot was taken by Odette in Singapore, becoming the first restaurant in the country to top the list. Japan has the most restaurants included on the list, with 12.

Den in Tokyo is the country’s highest-ranked eatery at the third place. Den chef Zaiyu Hasegawa was presented this year’s Chef’s Choice award.

Hong Kong has the second-highest number of top 50 restaurants with nine, including the newly-added Vea and Seventh Son, while Thailand follows closely with eight restaurants including two new restaurants, Gaa and Sorn. Singapore, the host of the World’s 50 Best Restaurants award ceremony in June, has six other restaurants on the list, bringing the country’s total to seven. 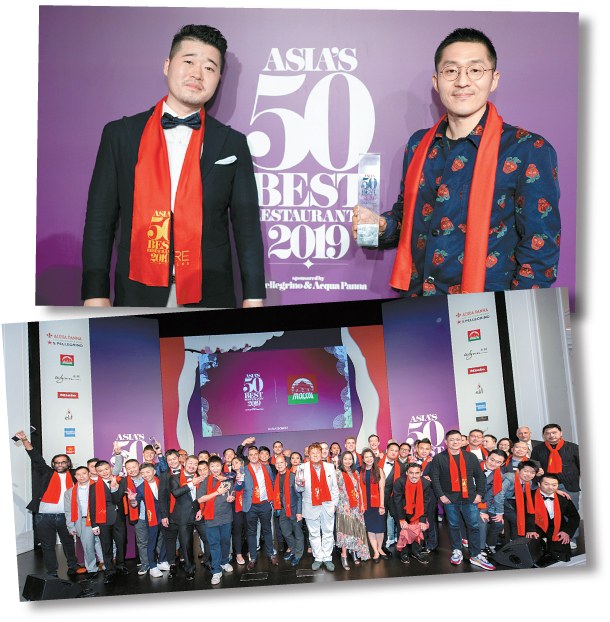 At top, Chef Kim Dae-chun of restaurant TocToc, left, and chef Kang Min-goo of restaurant Mingles, pose at the award ceremony. A group of chefs, above, whose restaurants were included on the list of top 50 restaurants in Asia pose together. [ASIA’S 50 BEST RESTAURANTS]

The annual list has been published by William Reed Business Media since 2002, alongside a top 50 list for Latin America and one spanning the entire world.

It has been used alongside the Michelin Guide among foodies and travelers looking for tasty spots to visit overseas. About 300 culinary experts, including chefs, cast votes based on their best restaurant experiences in the past 18 months, according to the organizer.

Out of the 50 ranked restaurants, 10 are on the list for the first time.

Regarding Korea’s lack of additions to the list, Korean culinary experts said that the local dining scene may lack diversity. The most-talked about restaurants in Korea still all specialize in modern Korean, a concept that was first introduced about 10 years ago with the arrival of Jungsik.

Many young culinary talents are focused on modern Korean cuisine in the hopes of making a name for themselves locally.

“There have not been any new or fun culinary [ideas] that could attract local attention and draw international diners to Korea,” said Choi Jung-yoon, a vice chair of Korea for the list organizer.

Food served during Asia’s 50 Best Restaurants events held in Macau represent cuisine from across Asia. At left is a seafood counter, and in the middle is a bun inspired by Korean perilla leaves. At right is a dessert prepared with a QR code that connects people to more information about the dish. [ASIA’S 50 BEST RESTAURANTS]

“We need to look around to see what’s appealing to diners these days locally and from overseas, to evolve from offering similar things at restaurants, because diners want to go to spots that are new and see something different on their plates.”

One style that experts point to as something to further develop is a Korean beef course, often dubbed hanwoo omakase. Hanwoo is Korean beef and omakase is a Japanese word referring to things that are prepared to order without listing specific dishes to be served.

Given that international travelers often say Korean barbecue is something they want to have during a visit, not to mention Koreans often going out to enjoy grilled meat for small and large gatherings, experts think that restaurants specializing in beef have a good chance to be well received among foodies.

“While the concept of modern Korean evolves over time, we also need to think more about cultivating new ideas,” said Kim Hye-joon, a food writer and consultant, adding that chefs and culinary event organizers in Korea need to work together to see what’s hot at the moment and what’s more crucial to help restaurants survive. “We need to be more systemic to discover what we do well and how we brand it, and that requires people in the culinary industry to collaborate more to promote each other to others.”

William Drew, a group editor for the list, said that ups and downs on the list are common, insinuating that a little hiccup doesn’t signal anything significant about the dining scene in a country overall.

“People are always excited about something new, and small changes up and down [aren’t] indicative of any serious problem,” said Drew.

He said he hasn’t experienced the dining scene in Korea yet.

“We can say what we think is great about Korean cuisine, and we try to provide a platform for the chefs to have a voice. Of course, to get more restaurants on the list, more people need to travel to Korea from outside of Korea.”

Previously, Korea had La Yeon, the Korean restaurant at The Shilla Seoul hotel in Jung District, central Seoul, as well as Ryunique in Gangnam District, southern Seoul, were on the list, but neither were included in this year’s edition.