Fashion brand steps out of its comfort zone with loud sneakers

Fashion brand steps out of its comfort zone with loud sneakers 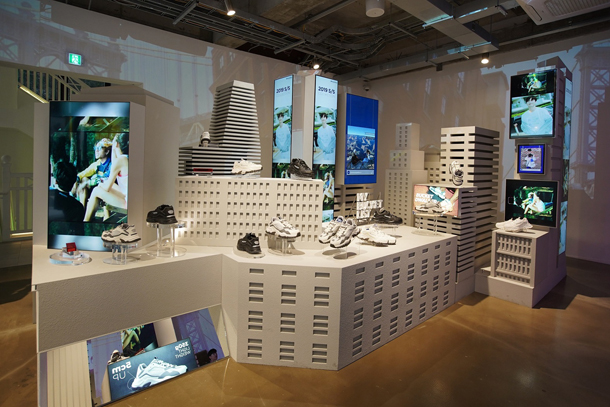 Many fashion brands are betting on the so-called ugly shoe trend to be their next big cash cow, and Discovery Expedition is no exception.

The local outdoor brand, named after the educational TV channel and operated by clothing manufacturer F&F, had for the past two years been best known for designing some of the country’s most popular long-padded coats, an item that took the Korean fashion world by storm.

After seeing signs of growth in the local shoe market - and not-so-stellar sales of their padded coats this winter - Discovery is dramatically shifting to footwear and hoping that thick-soled, clunky sneakers will win over customers.

This year, Discovery launched its latest sneaker line, branded the “Bucket” series, hoping to break the stereotype that all ugly shoes have to be heavy and uncomfortable. Functionality is key for the Bucket sneakers, which were named in the hopes that they will accompany their wearers as they travel to places on their bucket list. 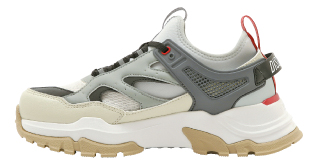 “The shoes we usually consider fashionable put greater focus on fashion and lack functionality, while it’s the other way around for outdoor brands,” said Discovery’s footwear team manager Lee Jin at a press briefing last Thursday. Lee recently joined the company after a long career at Prospecs, another sportswear brand that specializes in sneakers.

“But Discovery’s shoes combine function and fashion. We especially put a lot of attention on incorporating technology to make the shoes lightweight.”

The Bucket Dwalker, for example, weighs only 350 grams (12.3 ounces) and features comfortable insoles and a 5-centimeter (1.96-inch) platform suitable for walking, running and hiking.

According to Lee, the shoe and sneaker industry in general is a good place to be in now.

Citing data from the Korea Federation of Textile Industries, Lee said that the domestic shoe market is currently estimated at around 6 trillion won ($5.17 billion), up more than 50 percent from 2009, when the market was just worth 3.87 trillion won. Sneakers claim more than half, or 53 percent, of that market.

But why ugly sneakers? They grab people’s attention online and offline, explained Seok Koung-hoon, a manager in the brand’s marketing team.

“When people upload pictures of ugly shoes on Instagram to show them off, they’re really eye-catching,” said Suk. “Ugly shoes were searched up around 100,000 times a month on Naver [Korea’s largest web portal] in January. Since we launched the Bucket series, the keyword has gotten around 500,000 searches.”