Over the year, a lot of changes have been made to the Korean national baseball team’s preliminary roster. 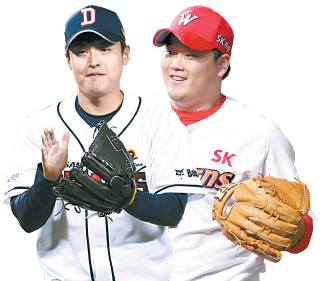 The KBO announced the preliminary roster of the Korean national baseball team for the Premier12 on July 23.

Led by manager Kim Kyung-moon, the 90-man preliminary entry included 43 pitchers, six catchers, 22 infielders and 19 outfielders. The KBO will submit a revised preliminary entry of 45 players for the Premier12 to the World Baseball Softball Confederation by Sept. 3. The final 28-man roster will then be announced on Oct. 3.

Of the players, the biggest changes were the pitchers. Surprisingly, more than half of the names were new when compared to the preliminary roster for the 2018 Asian Games. Of the 43 pitchers, 23 of them were new, as they weren’t added onto the preliminary entry for the Asian Games last year.

While veteran pitchers - like Kim Kwang-hyun of the SK Wyverns and Yang Hyeon-jong of the Kia Tigers - continued to see their names on the preliminary roster, quite a number of young pitchers managed to nab spots for the first time.

Although it’s only the preliminary entry and they are not yet on the national team, their addition is enough to prove that the KBO is going through a successful generation change.

Notable pitchers include Kim Tae-hoon and Seo Jin-yong of the Wyverns; Lee Hyoung-beom of the Doosan Bears; Jang Min-je and Park Sang-won of the Hanwha Eagles; Kim Sang-su, Oh Ju-won and Kim Seong-min of the Kiwoom Heroes; Moon Kyeong-chan of the Tigers, Choi Ji-guang and Choi Chae-heung of the Samsung Lions; Go Woo-suk and Lee Woo-chan of the LG Twins; Bae Je-seong, Kim Min and Jung Sung-gon of the KT Wiz; and Park Jin-woo of the NC Dinos.

Until last year, none of these players were even considered for the preliminary entry.

But this year is different.

The Wyverns’ Kim Tae-hoon and Seo are having the best seasons of their careers as they are fulfilling their roles as the team’s bullpen.

Of the players listed on the preliminary roster, the Bears’ Lee Hyoung-beom is probably the most impressive of all. Lee joined the Bears this season as a compensation player for catcher Yang Eui-ji. Normally, expectations for compensation players to help the lineup are low but Lee’s been beyond impressive so far this season. In 48 games as of Monday, Lee picked up five wins, a loss, 11 saves and eight holds with a 1.87 ERA. With his statistics, Lee earned his spot as the Bears’ closer.

The Eagles’ Jang finally earned his spot as the starter this season while Park has become a crucial member in the Eagles’ bullpen.

The Heroes have comparatively younger players than other clubs but in their bullpen, they are looking strong with veterans. Heroes’ captain Kim Sang-su has already picked up 29 holds with a 2.58 ERA, while Oh picked up 13 saves with a 1.91 ERA.

Despite the Tigers’ struggle, Moon successfully fulfilled his role as the closer by picking up 13 saves with a 1.49 ERA in the first half of the season.

This year, the Wiz made a big improvement. The addition of Bae, Kim Min and Jung Sung-gon allowed the Wiz to finally get its players added onto the preliminary entry. As the youngest club in the KBO, the Wiz players, especially the pitchers, were hardly seen on the national team roster. This season, the Wiz is having its best season in the KBO, as it closely competes for the postseason spot. As of Monday, it’s only two games behind the Dinos, for the last postseason spot.

In addition to these players, major league returnees also got their names added onto the preliminary list. The Wyverns’ closer Ha Jae-hoon and the Wiz’s Rhee Dae-eun are in contention for the national team. Although it’s their first year in the KBO, they’ve already become crucial members for their respective clubs as closers. Rhee also has experience with the national team, as he played for Korea during the 2015 Premier12.

High school graduate rookies are also in contention for the national team spot. Twins’ Jung Woo-young and the Lions’ Won Tae-in, the two most likely candidates to win the KBO’s Rookie of the Year award, both made it onto the preliminary list. In addition to the two, the Tigers’ Kim Ki-hoon and the Lotte Giants’ Seo Jun-won also earned their chances to get their names onto the final national team entry.

Aside from the KBO players, Choi Ji-man of the Tampa Bay Rays was also added onto the preliminary entry.