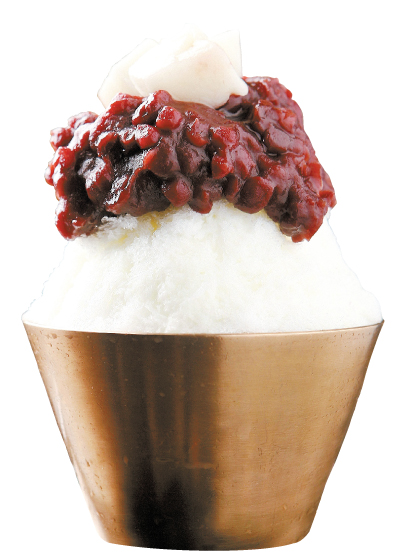 Bingsu, shaved ice, is no longer only a summertime delight thanks to the many franchises that serve the sweet dessert throughout the year. But the hottest season of the year is the time to experience the wide variety of flavors you can enjoy in a bowl of bingsu.

Although the dessert is not only enjoyed in Korea, the name bingsu has gone global just like other modern-day Korean foods like chimaek, a combination of fried chicken and beer. The modern-day bingsu is thought to have come from Japan during Japanese colonial rule (1910-1945), and then became more popular when restaurants and cafes could more easily make and store ice. The most basic ingredient for bingsu is ice flakes. Boiled and cooled red beans are also considered to be a part of what makes a classic bingsu, which is why Koreans used to call the dessert patbingsu (pat meaning red beans). But as some people did not enjoy red beans, the term bingsu became more popular. i

Until in the late 1990s, bingsu was usually made with clear ice, red beans and fruit jelly with drops of milk. The amount of milk or condensed milk determined how silky the bingsu was and many people bought small ice grinders to make a quick bowl of bingsu at home as well. Some added cereal for more crispy texture or grain powder called misutgaru for a creamier taste. Some frozen strawberries were added but not often.

The country was then hit hard by Iceberry in 1999, a franchise bingsu shop where large, sharable bingsu covered in all kinds of frozen fruits were served. The bowl was large enough to share with more than four people. This was the beginning of when people started to think that bingsu could be a dessert for any season. Many different neighborhoods started to welcome the particular dessert spot, and customers of all ages came in groups to share a big bowl. Shops with similar fruit bingsu concepts started to spring up in the early 2000s, and those who did not enjoy red beans had much to rejoice.

After a while, the excitement over the refreshing fruit-focused bingsu died down because people craved a more simple version of the dessert. Some traditional Korean snacks, like tteok, or rice cake, were seen as a healthier snack options that you could add to the sweet treat. Injeolmi, tteok covered in beige grain powder, were also put on top of ice flakes and red beans, with many people enjoying their contrasting flavors. The simple ice flakes with red bean and white chewy tteok on top began being called “classic” or “old generation bingsu.”

At around the same time, the love for creamier ice flakes started to rise and some shops started to serve milk ice flakes, which has continued to today.

Mealtop, which has served bingsu since 1985, had its heyday around then. It serves softer flakes with red beans and tteok on top. One bowl serves one person, so the shop is popular among those who do not like the idea of having multiple spoons sharing one bowl.

Sulbing, which calls itself the “Korean dessert cafe,” was another popular franchise that helped make the traditional-style bingsu popular once again.

Luxury hotels throughout Seoul have also picked up on the bingsu and often serve fancy varieties of the dessert in their lounges or bars. Compared to other items served in hotel restaurants and bars, one bowl of bingsu can usually be shared by a couple of people, making it a relatively affordable option, especially compared to other menu items at the city’s top hotels. Without a doubt, the most famous hotel bingsu is Hotel Shilla’s mango bingsu.

First introduced at Hotel Shilla Seoul in 2011, the bingsu came right at the same time when the sharing food photos on social media was becoming more common. A bowl of soft ice flakes covered in apple mango from Jeju Island - a uncommon variety of the fruit - instantly caught the eye of many. Even almost a decade after the arrival of the hotel’s mango bingsu, people line up for over an hour to enjoy a bowl, which costs 54,000 won ($44.41) at the hotel. The hotel said it sells an average of 150 to 200 bowls every day throughout each summer. Some other hotels joined in on the trend by providing their own luxurious take on the dessert. JW Marriott Dongdaemun Square Seoul served bingsu made using Dom Perignon Champagne until last year, allowing anyone a sip from a bottle that many can’t afford to drink often.

Other hotels tried to make their own signature style of bingsu, researching what they could add to the dessert that would attract customers and cost between 30,000 won and 60,000 won. The Westin Chosun Seoul offers a watermelon bingsu that is appealing because the summer fruit has until recently rarely been associated with the dessert. Lotte Hotel Seoul this year collaborated with fashion brand Moschino to offer a bingsu mixed with an afternoon tea set. The small bites are served on a tray shaped like a bear, and guests are welcomed with a large-size stuffed bear doll sitting on a chair at their table. Courtyard Marriott Seoul Yeongdeungpo collaborated with jewelry brand Tirr Lirr and introduced a bingsu with pearl-like chocolate balls. Michelin-three-starred French chef Yannick Alleno, who leads the kitchen at the Signiel Seoul’s restaurant Stay introduced a bingsu as well. Yim Jung-sik, executive chef of Michelin-two-starred Jungsik, also serves coconut bingsu at his more casual Jungsik Cafe.