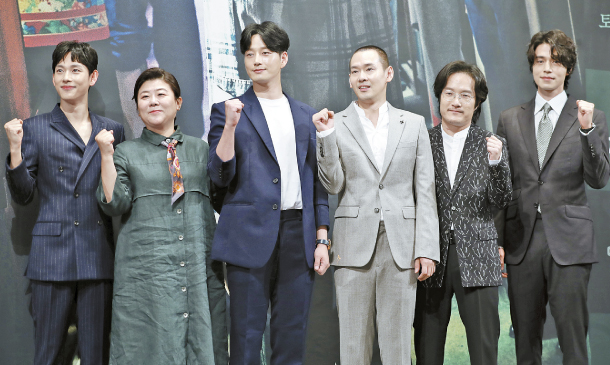 The stars of the thriller drama “Strangers from Hell,” based on a popular Naver web comic, pose during a press briefing in southern Seoul on Wednesday. From left are Im Si-wan, Lee Jung-eun, Lee Hyun-wook, Park Jong-hwan, Lee Joong-ok and Lee Dong-wook. [YONHAP]

Popular suspense web comic “Strangers from Hell” is coming to television with a star-studded cast this Saturday.

Since the story debuted on Naver’s webtoon platform in 2018, it attracted over 800 million views, enticing readers to follow the thrilling adventures of Yoon Jong-woo, who finds himself sharing a gosiwon, or boarding house, with murderous residents after he comes to live alone in Seoul.

With the blessing of the webtoon’s author Kim Yong-ki and backing by entertainment conglomerate CJ ENM, the bone-chilling story is being turned into a 10-episode series on CJ’s OCN channel.

Playing the protagonist is Im Si-wan, a K-pop idol-turned-actor who was widely-praised for his performance in another drama based off a webtoon, “Misaeng” (2014).

Lee Jung-eun, who played the housekeeper in the Palme d’Or-winning “Parasite,” is taking on the role of the boarding house’s creepy landlord. Actors Lee Hyun-wook, Park Jong-hwan and Lee Joong-ok are playing the three boarding house residents who drive the protagonist insane through their disturbing behavior like lurking behind his back and hysterically laughing non-stop.

Lee Dong-wook, who starred in hit drama “Guardian: The Lonely and Great God” (2016 - 2017), plays a mysterious dentist whose clinic is near the boarding house, a new character that doesn’t appear in the original story.

The drama contains some changes to the original story, but it will maintain the same tone and message of the web comic, explained director Lee Chang-hee.

“Viewers won’t feel like there’s such a big difference after they finish watching the drama,” he said during a press conference on Wednesday in southern Seoul.

“Like in the webtoon, we use the concept of the gosiwon in the crowded city of Seoul to symbolize our society, where you have people living just a wall apart from each other but are strangers without any communication.”

“Strangers from Hell” is the first TV series from Lee Chang-hee, who’s previously directed thriller films like “The Vanished” (2018).

In fact, the drama will be like 10 mini films, according to Lee, who emphasized that “Strangers from Hell” is a production from OCN’s “Dramatic Cinema” project, which seeks to incorporate more cinematographic elements into TV shows.

Beginning this week, “Strangers from Hell” will air every Saturday and Sunday night at 10:30 p.m. Cartoonist Kim Yong-ki is also working on a spin-off of the original web comic that is being published every Wednesday and Friday on Naver, this time presenting the events that unfolded before Jong-woo joined the boarding house.