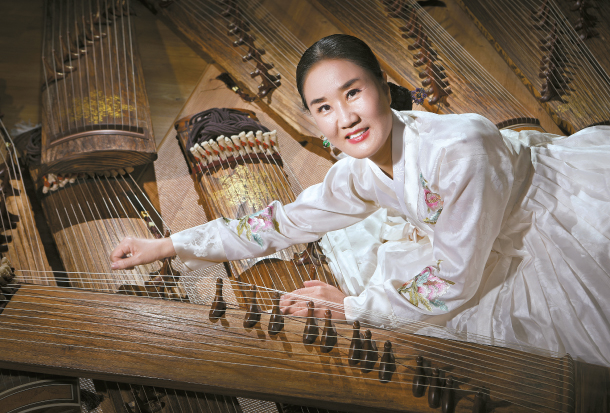 Kim Hyeon-ju, 59, is a gukak (traditional Korean music) musician based in Busan.

Having studied under the masters of gayageum byeongchang, the traditional music genre designated as one of the Important Intangible Cultural Properties of Korea, and another Korean music style known as sanjo, Kim wants to share national history and contribute to unification with her gayageum (traditional zither) performances.

Gayageum byeongchang is a style of music in which a performer sings to accompany a gayageum and sanjo is a solo instrumental performance.

The musician has been organizing the annual “Nostalgia” performance for six years and the auditorium is always filled to capacity. The show is held to honor deceased patriots and to remember those who fought for the independence of the country, as well as war veterans.

She is currently serving as the leader at Preservation of Gayageum Byeongchang in Busan.

Kim’s love for music began when she was a young girl.

She began learning traditional Korean dance at age 7 and studied it until she entered the Busan Municipal Dance Company in her early 20s.

But Kim’s career entered a new chapter when she met pansori, or traditional narrative singing, master Ji Su-bok. Ji nicknamed Kim as Hwang Jin-yi, the most well-known female courtesan who lived during the Joseon Dynasty (1392-1910).

Hwang is widely known as an outstanding entertainer who was good at singing, dancing and playing musical instruments. Ji thought her student and Hwang had a lot of things in common.

Of all the teachers Kim had, Kang Jung-suk, who is the country’s designated gayageum byeongchang and sanjo master, is the one Kim still respects the most.

Since Kim got a late start in gayageum byeongchang and sanjo, she did everything she could do to catch up.

She would take the very first train from Busan to Seoul to learn gayageum byeongchang and return home by riding the last train on the same day every week. Even now, she takes lessons from Kang. 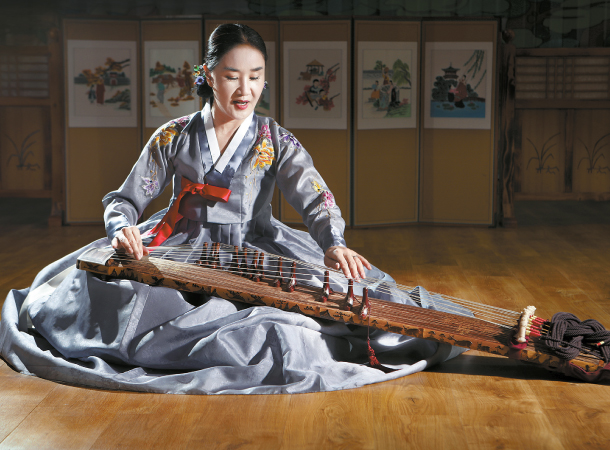 Kim has traveled across the country to learn more about music and has dedicated her life to it. One day, she realized that she had no friends around, but her loneliness made her focus even more on music.

She used to sing songs near a waterfall until her throat bled from singing so much. She once rented an empty house for a month and secluded herself there to focus on learning more music.

From the moment the sun goes up until the sun goes down, Kim spends her whole day singing, beating a drum and plucking the strings of her gayageum. Whenever she has a hard time, Kim’s husband is by her side.

Kim said she tries her best - not to become a master, but to be a good role model to her students. She wants to prove that anything can be achieved when you give 100 percent to what you want to succeed in. Possibly because of her philosophy, Yerim Children’s Gayageum Byeongchang, which is run by Lee, is getting rave reviews.

Apart from educating her students, Kim spends a lot of time promoting gukak and gayageum byeongchang in the Yanbian Korean Autonomous Prefecture, located in China.

Since 2008, Kim has been visiting Yanbian almost every month. She hopes to promote traditional music to those who are descendants of people who fought for the independence of the country.

Kim said she was surprised to see a lot of people living in Yanbian were listening to revised gukak from North Korea. Kim felt that she needed to teach proper gugak and she’s been visiting Yanbian since then.

She stages gukak performances and gives lectures on the traditional music. She has also donated 30 12-string gayageum to a cultural center in the region.

To mark the 70th anniversary of the Korean War (1950-53) next year, Kim is planning to name her seventh “Nostalgia” show “Go Away 38th Parallel.”

The performance will be set right after the country gains its sovereignty from Japan and the show centers around people hoping for the reunification of Korea. A forty-member orchestra from Yanbian will take part in the performance.

Busan was made the provisional capital of Korea when the Korean War broke out. Many soldiers who participated in the war as part of the United Nations Forces are buried in the port city.

Being a musician based in Busan, Kim dreams of a peaceful future. “I want to bring peace to the Korean Peninsula and heal people with my music.”