[ZOOM KOREA] Artist turns her love of flowers into tea

[ZOOM KOREA] Artist turns her love of flowers into tea 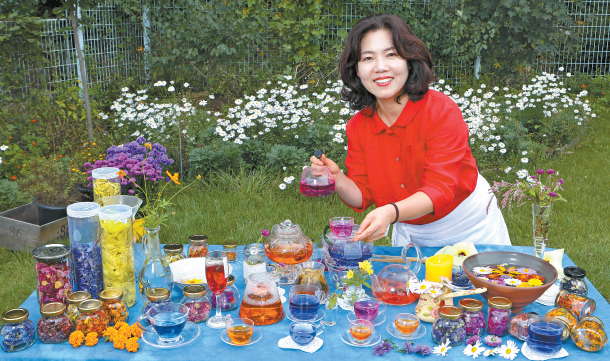 Painter and naturalist Jin Sun-mi presents flower teas that she made at her art studio located in Chuncheon, Gangwon. [PARK SANG-MOON]

Painter Jin Sun-mi says she is happiest when she is surrounded by nature. She often paints flowers, makes tea out of dried flowers and has intentionally slowed down the pace of her life to be close to nature.

She considers the wind and wild flowers her companions and she is easily moved by the sight of falling autumn leaves.

Jin’s small art studio is located in Sinbuk in Chuncheon, Gangwon, and is surrounded by both the Bukhan River and the Soyang River.

When standing in front of the art studio, ridges of Mount Obong and Mount Majeok come into sight as if they are part of a folding screen.

A path dotted with cosmos flowers leads to Jin’s flower field and her studio. The field is filled with white, fully-bloomed Siberian chrysanthemums swaying in the wind. Other flowers, from chrysanthemums to globe amaranths to marigolds, fill out the rest of the flower bed, making a picture-perfect combination with the bright blue sky. The flowers seem to keep the warmth of the sunlight in the autumn day.

Born to a strict father and a mother who spent much of her time planting and taking care of flowers, Jin was the youngest child of three.

As the baby in the family, she grew up receiving a lot of love from her parents. She often spent her time in her mother’s flower field.

Jin recalled that red peonies in full bloom were visible whenever she opened her windows and yellow Kerria made the young girl’s heart flutter.

The flower field changed depending on the season, as everything from garden balsams to Dahlias to marvels-of-Peru to balloon flowers bloomed at different times of the year. Jin often took herself outside and danced in the middle of the flowers.

Jin’s mother recommended that she draw her favorite flowers in her own sketchbook. Although she was talented at drawing, she ended up majoring in business administration in college at her father’s suggestion.

Left: A bibimbap, or rice mixed with vegetables, dish made with flowers made by Jin at her home. Right: Jin presents flower petals she plans to use to make various flower teas. [PARK SANG-MOON]

After graduation, she landed a job, but soon quit and left for Taipei, Taiwan, for no specific reason. She simply wanted to study Chinese so that she could find something that she wanted to do.

After three years in Taipei, Jin returned home and got married when she was 30.

After getting married, Jin opened a restaurant near the Magok Temple in South Chungcheong, but things didn’t go well and she eventually shut down the restaurant. She eventually settled down in Chuncheon where she is located now.

In Chuncheon, she began teaching children using educational materials published by a local publishing company. The company wanted her to sell some of its books, and she eventually became one of the publisher’s top salespeople in the country.

Jin said she gave her all while working at the publishing company for three years. But life didn’t go as planned and Jin’s career was put on hold after she was diagnosed with cancer when she was 35. She was recommended to undergo a surgery and receive chemotherapy, but she refused all the medical help.

After her diagnosis, Jin spent a year in mental and physical pain. Looking at her child, however, she was determined to find a way to live her life to the fullest and headed for the mountains to regain her health. She gathered up the courage and began to climb almost all of the mountains across the nation. 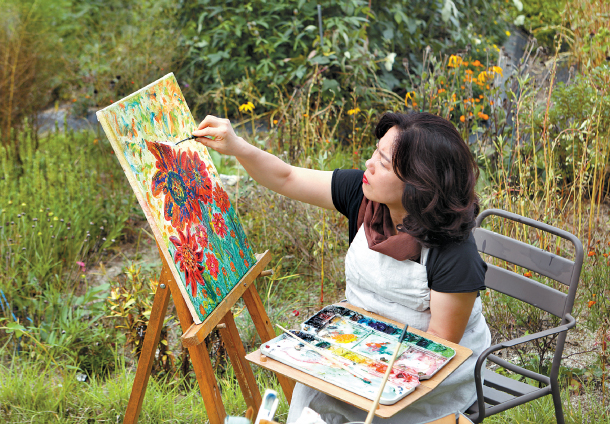 Jin works on a drawing of crape myrtles that grow in her flower field. [PARK SANG-MOON]

There were some dangerous moments on her hikes, as she came across wild animals, but Jin also rediscovered her love for flowers as she went up mountains. She started to draw flowers she saw and her life also began to blossom.

Jin became a painter at the age of 37, relatively later than many others, but her drawings were so loved that they were sold out when her artworks went on display at exhibitions.

Eventually, Jin stumbled upon a new job thanks to the balloon flowers.

In order to produce quality flower teas, Jin searched the web and found a master that she could learn from. After being immersed in the discipline of making flower teas for about a year, Jin was able to become a licensed tea maker.

It takes a lot of time and effort to produce flower teas. Since each flower has different characteristics and the process is hugely affected by weather and season, it is a time-consuming procedure. You have to pick the flowers and know how long to dry them for. It requires periods of rest and then the procedure starts back up again.

For Jin, flower teas are more than just a cup of tea - they remind her of her mother.

Clouds drift away, wind blows and flowers come and go. Jin believes beautiful things in nature will protect her body and soul. She will keep drawing flowers and making flower teas.

As an artist, she would like to live like pure dew that disappears in the wind by appreciating the things she has in her arms.