‘Dronebots’ and lasers are the future of Korea’s defense

‘Dronebots’ and lasers are the future of Korea’s defense 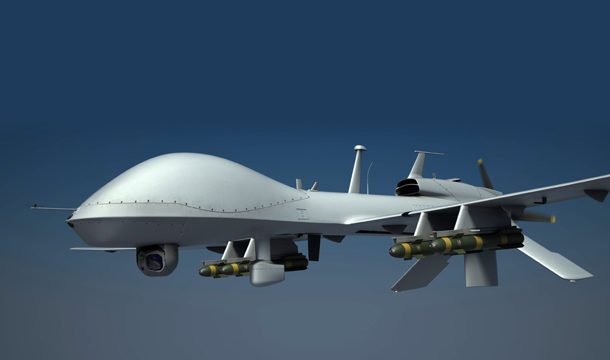 The perpetual military standoff on the Korean Peninsula since the brutal 1950-53 Korean War long geared the minds of South Korean defense planners toward a singular purpose — defending the country against the threat posed by Pyongyang.

For Seoul’s officials, the North’s conventional military capacity has always served as a barometer of sorts, informing how South Korea’s military should be equipped and trained. Unsurprisingly, South Korea’s armed forces today are highly specialized in taking on the North Korean military, which is principally still equipped with Soviet and Chinese supplied weaponry, but have otherwise been largely untested in terms of the diverse threats presented by modern warfare.

Seoul has consistently strived to modernize its military to address this most essential shortcoming, successfully building one of the most well-equipped ground forces in the world.

But the changing security dynamics in Northeast Asia throughout the last few years — led by an ever more formidable China that seeks to exert its military clout on its neighbors and a Japan that hopes to regain the military prowess it once commanded — have made such concerns increasingly more pronounced.

These concerns are behind the Moon Jae-in administration’s Defense Reform 2.0 — a wide-ranging plan to restructure and modernize South Korea’s military so that it can dynamically adapt to not just the threat stemming from North Korea but to “any force capable or willing to apply threat” to South Korea’s sovereignty, according to the Defense Ministry’s latest white paper.

After announcing the largest single-year increase in military spending in a decade last year, Moon last week told the country’s National Assembly that Seoul would be spending an additional 7 percent this year to boost defense expenditure to more than 50 trillion won ($42 billion), as part of a larger plan to invest 290.5 trillion won by 2024.

This enlarged budget, while serving as Seoul’s response to the regional arms race at large, reflects the country’s long-term blueprint to adapt its military to the rapidly changing face of modern warfare.

Yet perhaps the most crucial factor pressing South Korea to move in this direction may be less about external threats but rather an existential crisis from within. As one of the countries with the lowest fertility rates in the entire world, South Korea faces an extreme demographic transition that threatens to diminish its population from a peak of 51.3 million in 2024 to just 29.5 million by 2100.

For South Korea’s military, which relies on mandatory conscription of able-bodied young men, this means a rapidly shrinking manpower pool. While plans are already in place to reduce the country’s active military personnel from 599,000 currently to 500,000 by 2022, a looming demographic cliff means this number is estimated to drop much further in the decades to come.

To offset these inevitabilities, defense planners have looked toward automation and fourth industrial revolution technology to bolster the country’s military needs in the next century.

In tandem with Defense Reform 2.0, the South Korean Army in October 2017 announced five “game changers” that would define the future of South Korea’s military forces — an arsenal of high-precision and high-powered ballistic and cruise missiles, a well-equipped strategic mobile strike force able to take down key targets, special operations forces tasked with decapitation missions, a fleet of drones and autonomous vehicles and a wholesale upgrade of military equipment for individual combat troops, known as the “Warrior Platform.” 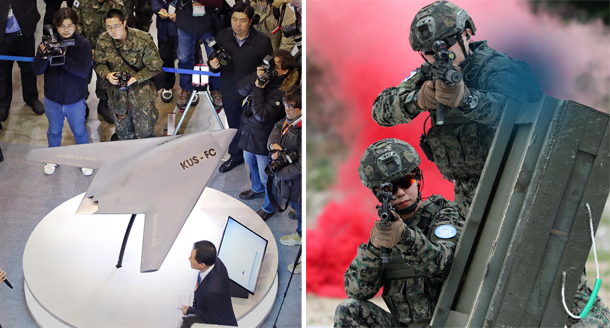 A study published by Bard College’s Center for the Study of the Drone in September showed that the use of military drones, once the exclusive territory of heavy defense spenders like the United States, has rapidly proliferated around the globe over the last decade, becoming a key element of security not only for countries but also non-state actors.

China, a leading player in the commercial drone market, operates a slew of military drones across all parts of its armed forces and has already demonstrated its ability to match the United States in terms of military robotics. At its National Day parade in October, the Chinese showed off the newest of its drone projects, including the so-called Sharp Sword combat drone — the first stealth unmanned aerial vehicle (UAV) in the world capable of flying for extended periods of time.

Even North Korea has been actively developing drones for military use, most notably deploying them to spy on South Korean military installations in 2014 before several of them crashed and were discovered in the South’s border area. While the UAVs in question appeared primitive, the South’s inability to detect them rang alarm bells and generated significant controversy.

The importance of the technology has not been lost on Seoul’s military planners. As far back as the 1970s, South Korea toyed with the idea of developing its own drones, attempting to build the first such iteration, the Solgae, with technical assistance from Britain. The project was scrapped by the mid-1980s, but interest in UAVs was revived after the United States successfully deployed military drones against Iraq in the 1990-91 Gulf War.

A new homegrown initiative by the Agency for Defense Development (ADD) and Korea Aerospace Industries eventually produced the country’s first military surveillance drone — the RQ-101 Songgolmae — in 2000, making South Korea the 10th country in the world to domestically produce UAVs for military use.

The country’s military has also been active in deploying foreign-made drones, notably from Israel, such as the Searcher II and Heron drones. The KUS-9, RemoEye-15 and RemoEye-006 are also in use in different units of the Army depending on operational necessities.

To integrate the use of such systems on a far more professional level, the South Korean Army in September last year launched an entirely separate drone combat team of around 80 personnel to undertake ground intelligence using a variety of different land- and air-based “dronebots,” a combination of the words “drone” and “robot,” which have a range of capacities including reconnaissance and electronic combat.

Yet perhaps the most anticipated component of South Korea’s drone program is its project to build a homegrown mid-altitude unmanned aerial vehicle (MUAV), tentatively known as the KUS-15. Primarily developed by ADD and Korean Air’s aerospace division, the idea was first conceived in 2008, and around 488.4 billion won has been invested in the project for a deployment deadline in 2020. While a series of failures during testing led the project to be delayed three times, on Sunday, the Defense Acquisition Program Administration (DAPA) — the country’s arms procurement agency — announced the MUAV system would be completed by June 2020 but may only be ready for deployment the following year.

Adapted from the U.S. General Atomics MQ-9 Reaper drone, the MUAV can surveil territory of up to 100 kilometers (62 miles) from an altitude of 10 to 12 kilometers, making it capable of recording high-resolution footage far beyond the demilitarized zone. In light of Seoul’s inter-Korean military agreement signed with the North in September last year, which forbids either side from operating UAVs within 10 to 15 kilometers of the military demarcation line in the DMZ, the MUAV is particularly important for South Korea to be able to detect key North Korean military installations and targets without further raising tensions on the peninsula.

In the long term, Korean Air has also been tapped by the government to develop what it calls the KUS-X, an unmanned combat air vehicle with stealth capacities, capable of undertaking enemy air defense suppression or close air support missions for ground troops. The United States’ MQ-1 and MQ-9, commonly known as Predator drones, have been highly effective in undertaking such tasks in combat operations in the Middle East. 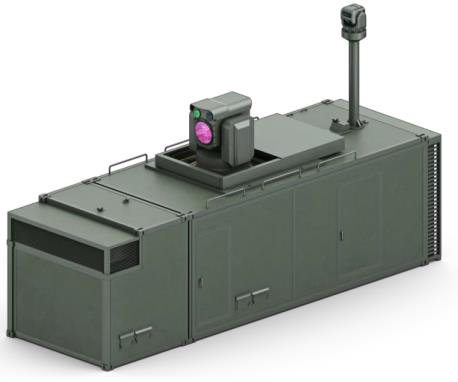 A mock-up of the Block-I anti-aircraft laser gun under development by the Agency for Defense Development. [DEFENSE ACQUISITION PROGRAM ADMINISTRATION]

Adding to these development projects, Seoul is also in the process of introducing four RQ-4 Block 30 Global Hawk aircraft to its drone fleet from the United States, at the cost of $950 million. Last week, the South Korean Air Force announced two of the four Global Hawk aircraft it purchased would arrive in the country in November, where they will be prepared for active deployment until May next year. Built by Northrop Grumman, a U.S. aerospace and defense contractor, the drone is perhaps one of the most expensive and sophisticated systems currently in use, able to surveil up to 200 kilometers of terrain from a high altitude of 20 kilometers. This, in effect, would put almost half of North Korea’s entire landmass within range, thereby elevating Seoul’s reconnaissance capabilities far beyond current levels.

In tandem with building such future engines of war, South Korea has also devoted significant resources into deterrence efforts against enemy UAVs.

According to a DAPA announcement last month, Seoul will be investing approximately 88 billion won into building an anti-aircraft laser system capable of shooting enemy drones out of the air by 2023. This anti-aircraft system, developed from technology researched by ADD, would use optical fibers to generate laser beams that can be fired at small fixed-wing UAVs or helicopater drones from a short distance. The laser, a DAPA spokesman said, would neither be visible to the human eye nor would require any ammunition, only an electric power source.

While they seem like something out of a science fiction novel, such lasers may very well become a mainstay of anti-drone defense systems. Raytheon, a U.S. defense contractor, announced last month it had delivered the first anti-drone buggy to the U.S. Air Force that can use electro-optical and infrared sensors to track drones and then destroy them with its laser.

During this month’s Seoul Aerospace and Defense Exhibition 2019, where South Korea showcased its latest military equipment, defense manufacturer Hanwha demonstrated a laser system capable of detecting and neutralizing objects on the ground such as land mines or bombs, reducing the danger posed to soldiers. Kim Chun-gil, a defense strategy and business development manager at Hanwha, told the Korea JoongAng Daily that the system has a range of around 300 to 400 meters (984 to 1,312 feet) for objects on the ground, and that further development would allow it to accurately take down objects in the air.

“So it’s a real weapon of the future,” he said. “A Korean-style Star Wars.”

Such a label, while referring to the popular science fiction film series, also alludes to the U.S. Strategic Defense Initiative first proposed under the Ronald Reagan administration, which sought to build a missile defense system using a wide array of advanced concepts like lasers. Technological limitations in the 1980s mired the project in controversy, leading to its eventual closure in 1993, but modern militaries are widely adapting the technology in today’s combat systems.

South Korea’s military hopes to expand the laser project further for its eventual applicability to not only drones, but also enemy manned aircraft, missiles and satellites.

Advances in military technology are also set to transform the status of individual combatants on the battlefield. Another of South Korea’s game-changing plans is a concept titled “Warrior Platform,” a project to upgrade the equipment of individual troops to increase their survivability and enhance their combat abilities, turning them into “cutting-edge scientific technology soldiers” as described by former Army Chief of Staff Gen. Kim Yong-woo at a press conference in February.

Equipment to be provided for these “supersoldiers” includes a ballistic helmet, combat and night vision goggles and an infrared designator used to distinguish friend from foe.

While such tools had been reserved for the most elite troops in the South Korean military, Warrior Platform would make them available to regular infantry as standard issue.

Unsurprisingly, estimated costs for the initiative are astronomical, estimated to set Seoul back approximately 120 billion won just to implement the first phase of the project — upgrading individual equipment to the level of other professional militaries around the world — by 2023.

Yet for a country weathering the dual pressures of demographic decline and a challenging security environment, such investments may be South Korea’s only viable option if it wants to remain a significant military power on the global stage.