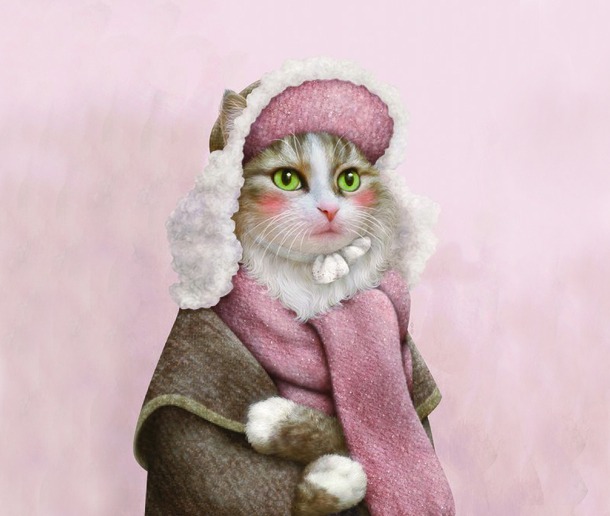 A residential area located in the Gaehwa-dong area of Gangseo District, western Seoul, looks like an ordinary neighborhood dotted with low-rise brick houses, but one alley is packed with people standing in line to visit a two-story house that is home to a cafe named Cat Garden.

The spacious cafe, which markets itself as the country’s first open-air feline cafe, is home to 111 cats. The cats are set loose throughout the two-story building and its roomy front yard. Some of the cats approach visitors and rub against them, a gesture of affection.

Han Yeon-ji, a woman in her 20s, was one of the visitors. She has two cats at home, but she paid a visit to the cafe to meet other cats.

“Cats are quirky and it makes them attractive and adorable. I can forget about all my worries just by looking at them,” said Han.

From top: A picture from photo book “Cat, The Magic of My Life;” A still from YouTube cat channel Muji Makji; A still from the local film “Hello, My Cat” (2019); A still from local film “The Journey of the 12 Cats” (2019); Cat cafe Cat Garden in Gangseo District, western Seoul. [KRISTINA MAKEEVA, SCREEN CAPTURE, TRIPLE PICTURES, COCOON9, PARK SEO-YOUNG]

Park Seo-young, the owner of the cafe, was busy serving more than 100 customers. She converted her father’s vacation home into a heaven for cats two years ago in the hopes of “creating a place where humans and cats can coexist.”

“I have nearly 500 customers [per day] during the peak season. They feel comfortable just by petting the cats,” she added.

Until a decade ago, cats were mostly despised in Korea. Stray cats were even dubbed “thief cats” for ripping through plastic bags to get scraps of food inside and running around the streets. Many stray cats were killed by people for crying in the middle of the night.

But in recent years, cats have become popular animals that conjure up peaceful images for many people.

Social media brims with cute images of cats. Hundreds of accounts on Twitter and Instagram are dedicated to sharing images and videos of cats and boast millions of followers.

Before the cat died of complications from a urinary tract infection last year, it worked as a model for its owner’s company and was even involved in various business projects.

The popularity of cats online is likely to have led to the rise of pet cats in Korea.

According to a report published in 2017 by the Korea Rural Economic Institute, the number of pet cats in the country are around 2.43 million. While there are more households with dogs, the number of homes with cats is growing at a more rapid rate.

Another report issued by the Seoul Metropolitan Government in 2018 said that the number of households with dogs dropped 4 percent compared to the city’s 2014 report, while 3.6 percent more households opted for cats in the same period.

The report also asked people how satisfied they were with their pets. Cat owners showed higher satisfaction than those who were raising dogs.

As demand for cats increases, some breeds have proven to be more popular than others.

The most sought-after breed in Korea is the Ragdoll. The cat was featured in a couple of popular drama series including tvN’s “Because This is My First Life” (2017) and the SBS show “Don’t Dare to Dream” (2016).

The cat, which has a thick and lush coat, can be as expensive as 7 million won ($6,000). Scottish fold and munchkin, two other breeds, can cost between one million and two million won.

“If a certain breed becomes especially popular, the price goes up because people ask for more qualifications from it,” said Jang Hwang-yong, the owner of the Cherry Cat pet shop in the Nonhyun-dong neighborhood of Gangnam District, southern Seoul.

“The price of the Ragdoll breed was once more than 10 million won two or three years ago, but the price [has since] dropped,” he added.

The market of cat supplies is also expanding. According to Auction, a local online retailer, the total sales of dog supplies increased 11 percent in 2018 from a year prior, while the sales for cat supplies jumped 24 percent during the same period.

The growth of the market can also be seen at a number of fairs for cat owners that started to pop up in 2017. Handmade snacks, cat furniture and automatic litter boxes that monitor the health of cats through their excrement are available at these fairs. The cat owners who visit these large-scale fairs consider their pets as part of their families, and they are willing to spend a lot of money on the products they buy.

Some people have found a niche market from the burgeoning cat industry. They call themselves cat detectives and they work to track down and find runaway cats.

The job was recently introduced as a promising job of the future on the JTBC2 TV show “Hogu’s Chart.”

By using high-tech gadgets such as thermographic and endoscope cameras, the detectives search for missing cats.

Some local communities have jumped on the bandwagon and try to position themselves as cat-friendly neighborhoods as a way of attracting more traffic to the area.

In April last year, the inaugural cat festival was held at Seonyu Village located near the Seonyudo Station in Yeongdeungpo District, western Seoul.

A cat supplies shop named Seonyudo Cat was one of a few organizers of the festival, along with some young artists who have settled down near Seonyu Village. All of the expenses for the festival were paid for through crowdfunding.

The artists and business owners knew that the area had long been called “cat mountain,” which led to the idea of holding the cat festival in their neighborhood.

In the Daehangno area of Jongno District, central Seoul, a walking path called cat road was created. The course was made after the Mural Village in Ihwa-dong in the same district.

While walking along the cat road, visitors can find a fancy bookstore stocked with books on cats, a cat shop run by an illustrator who only draws cats and a drawing cafe where people are able to sketch and paint cats of their own.

Many young artists have turned to cats for inspiration as well.

“I spend a lot of time with cats, so I try to blend my own experience to my drawings,” said Yi. The illustrator has had cats for 17 years.

Another illustrator nicknamed Nang Nang, who runs her own cat supplies shop at Daehangno, doesn’t have cats at home because her parents are allergic to them. Still, she introduces herself as an “online cat butler” because she loves to watch videos and collect images of cats online.

Some local cat owners refer to themselves as butlers because they believe that they serve their cats.

“While I was feeding stray cats, I joined a charity project [by drawing cats] and then [my drawings] received good feedback. That’s how I started drawing cats,” she added.

Cats in books, movies and online

According to Kyobo Bookstore, the country’s largest bookstore chain, 578 books about cats have been published in the past three years. The books include “Demain les Chats” by Bernard Werber and Haruki Murakami’s “The Secret of an Old Cat.”

Books on cats span across genre, from fiction to essays to art history.

Cats were previously featured in supporting roles on screen, but now they take center stage.

The EBS TV show “Take Care of My Cat” launched in 2018 and is now in its fourth season. On the show, a cat expert provides advice on how to train and take care of pet cats.

The popularity of cats is often attributed to the fact that they require less attention and care compared to dogs, but many others say that social media and other internet platforms have played a crucial role in promoting positive images of cats to people who may not have otherwise considered raising a pet of their own.

YouTube said that it saw a 77-percent increase in views of cat videos between January and July of 2018 from a year prior.

According to a study published in 2015 by a professor at the media school at Indiana University in the United States, a total of 2 million cat videos were uploaded onto YouTube in 2014 alone, and cat videos attracted a total of 26 trillion views that year alone.

Jessica Myrick, the professor at Indiana University, published the 2015 study and found that watching videos of cats helped people get over negative feelings such as anxiety, depression and sorrow.

Cho Ji-seon from the Institute of Human Behavior at Yonsei University said, “Cats used to be perceived as unfriendly animals, but cute videos of them highlighted a different side of their character.

Social changes from big families to single households are also related to the surge in the number of cats in the country.

A survey conducted by the Seoul Metropolitan Government in 2019 found that cats are preferred by those who live in one-person households or month-to-month tenants. On the contrary, dogs are raised by people across all households.

Shifting social values are also attributed to the current craze over cats.

Japanese professor Akihiro Yamane, the author of “The Secret of Cat Ecology,” wrote in his book that people are more individualized compared to the past and they are attracted to cats for their independent and free-spirited sides compared to dogs, who are loyal to their owners.