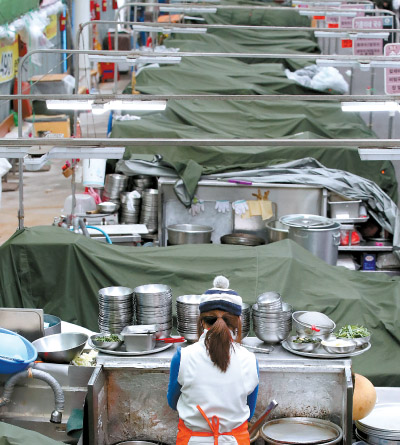 A lonely merchant tends to her cart in Seomun Market in Daegu on Tuesday. Though the outdoor market reopened on Sunday after a temporary closure for disinfection, most shops are still shut down and customers few because of fear of the coronavirus infection. [NEWS1] 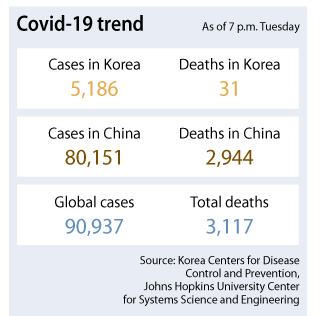 Medical facilities across Korea are stepping up efforts to take in coronavirus patients from Daegu as nearly 1,800 people remain quarantined in their homes waiting for empty hospital beds.

Infections in Korea shot up again Tuesday by 851, bringing total infections for the new coronavirus to 5,186 by Tuesday 4 p.m., according to data from the Korea Centers for Disease Control and Prevention (KCDC).

As in the past weeks, most of the new infections were found in Daegu and the surrounding North Gyeongsang, both located in the nation’s southeastern region.

At least 520 new diagnoses were made in Daegu, bringing total infections in the southeastern city to at least 3,601.

The death toll stood at 31 by Tuesday at 7 p.m., five more than the day before. The latest deaths were all senior citizens in Daegu, mostly with underlying illnesses such as high blood pressure or diabetes.

Among Korea’s 5,186 coronavirus patients, 34 have been discharged from hospitals after full recoveries, and the KCDC said in a press conference Tuesday that 23 people were in critical condition.

Korean health officials said Tuesday that while infections were continuously rising in Daegu and North Gyeongsang, other areas of the nation weren’t seeing any such major community infections, raising hopes that the outbreak can be reined in within the next two weeks, the incubation period of the virus.

As officials in Daegu, Korea’s fourth-largest city with a population of 2.5 million, complain about the shortage of hospital beds and isolation facilities to treat coronavirus patients, government offices and hospitals across the country have offered space and medical services in their areas.

Vice Health Minister Kim Gang-lip said Tuesday in a press briefing that about 1,800 coronavirus patients were quarantined in their homes in Daegu, unable to be hospitalized.

In response to the shortage of hospital beds in Daegu and some patients dying at their homes, starting from Monday, Korean government officials have been moving Daegu virus patients with mild symptoms to so-called life treatment centers being opened up in a variety of locales across the country. One such life treatment center opened Monday, another Tuesday, and a third was planned to open within this week.

Gangwon, which has 20 local patients, said Tuesday it was willing to accept patients from the hardest stricken areas.

At least 119 cases have been traced to Daenam Hospital, making it the second-largest group infection locus after Shincheonji.

Busan, where 90 people have been infected, also offered to discuss with Daegu about taking in patients.

As local government offices work through lists of Shincheonji worshippers in their areas, health officials said in a press briefing Tuesday that about 99 percent of Shincheonji adherents in Korea outside Daegu and North Gyeongsang, which amount to some 195,000 people, have been contacted via telephone and asked if they have symptoms by Tuesday midnight.

Nearly 13,200 of those people claimed they were feeling symptoms and half were tested, but only 1.7 percent turned out positive, the Ministry of Health and Welfare said. That appears to be far lower than the infection rate of Shincheonji worshippers in Daegu who have been tested, which is about 62 percent, the ministry continued, though the actual percentages may vary.