President Moon Jae-in issued Tuesday an apology to the public for the shortage of face masks as the coronavirus spreads.

“I am extremely sorry for causing inconvenience to the people because face masks were not supplied quickly and sufficiently,” Moon said in opening remarks during a joint video conference of the cabinet and the Central Disaster and Safety Countermeasure Headquarters. 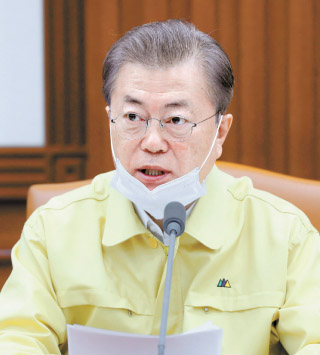 President Moon Jae-in presides over a cabinet meeting in the Blue House on Tuesday to discuss how to cope with the coronavirus crisis. [YONHAP]

It was the first time Moon offered an apology to the people about the government’s failure to resolve the shortage of face masks. Public frustration is high as people queue for hours to buy masks promised by the government - only to find they are sold out.

Moon told officials to admit that the government’s promises to supply masks repeatedly failed. “If we cannot have sufficient supply, we must inform the public and seek the people’s understanding and cooperation about an effective way of using face masks,” he said.

After apologizing, Moon ordered the government to support manufacturers making them by securing raw materials. He urged the government to come up with a fair and pragmatic distribution system. “If supplies are lacking, the shortages must be shared evenly,” he said.

Moon hosted the video conference at the government complex in central Seoul. Prime Minister Chung Sye-kyun joined the call from Daegu while ministers participated from Sejong. Fifteen mayors and governors joined the session.

At the beginning of his remarks, Moon continued to blame the secretive Christian sect for the rapid spread of the disease.

“The situation was completely different before and after Shincheonji,” Moon said, referring to the public health authorities’ conclusion that the controversial doomsday sect was a nexus of the outbreak. “Shincheonji followers’ mass infections and their extremely, unusually high infection rate have become a serious threat to our efforts to fight the epidemic. The crisis in Daegu and North Gyeongsang peaked, and the entire country started a war against the infectious disease.”

Moon also stressed the need for extraordinary government spending to boost the economy. “We announced a comprehensive measure last week,” he said. “And we will submit a supplementary budget bill to the National Assembly after holding a cabinet meeting tomorrow. We will inject 30 trillion won [$25 billion] directly and indirectly. We will use all possible means.”

Meanwhile, the Blue House said Tuesday the president has no plan to issue an emergency order to help Daegu deal with the rapidly increasing number of infected people. Daegu Mayor Kwon Young-jin asked Moon on Monday to do so.

“Please support us to find more than 3,000 hospital beds by using training institutes of public companies and conglomerates,” Kwon said in a press briefing Monday.

“During the conference, Kwon apologized to Moon for having requested him to issue an emergency order to get 3,000 beds,” Kang Min-seok, presidential spokesman, said Tuesday.

“I apologize to the president for making the request without having proper legal reviews in advance,” Kang quoted Kwon as saying. “I earnestly beg for the president’s understanding because the situation here was so urgent.”

Constitutional law experts told the JoongAng Ilbo on Tuesday that the current situation is not enough to justify an emergency order. “Even during the 1997 Asian financial crisis, the president did not issue an emergency order for financial and economic actions,” Professor Chang Young-soo of the School of Law at Korea University said.

There is only one precedent in which the president exercised his emergency order power. In 1993, President Kim Young-sam abruptly proclaimed an emergency presidential order on real-name financial transactions and protection of confidentiality.