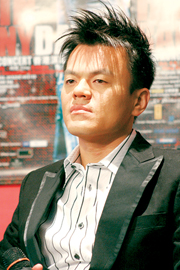 Celebrity music producer Park Jin-young took a stand against nationalism yesterday, saying the word Korean should be removed from the phrase “Korean wave.”
“I don’t understand why the Korean wave is taken as the rah-rah material,” Mr. Park said. “Now is the time to overcome nationalism, but instead we are intensifying that sentiment.”
Mr. Park, who produces the music of the star singer Rain, was referring to hallyu, the Korean pop culture wave. He said the nationalism causes other countries to criticize Korea.
He made the comments in an interview in New York with the JoongAng Ilbo. Mr. Park is scheduled to make a keynote speech on Feb. 16 for the forum “Hallyu in Asia: A Dialogue,” at the Kennedy School of Harvard University.
The media is at least partly to blame for fanning nationalism, Mr. Park said. “The press says things like ‘The Korean wave is conquering Japan and China,’ and that leads to anti-Korean wave sentiment overseas,” Mr. Park said.
Mr. Park said he’s been surprised to hear criticism expressed by producers and TV executives overseas.
“Now, the Korean wave is strong, so they are playing our music in their countries,” Mr. Park said. “But I get the sense that if the Korean Wave shows signs of dying out, they would go ahead and stop playing our music. It only hurts us if Koreans stress the Korean label too much.”
He also said politicians share in the responsibility. “Politicians do not look at pop art as a way to communicate culturally, but use nationalism for their own benefit.”
The producer noted that his own singer, Rain, received criticism on Web sites at home because he wore a Chinese-style costume and made dance moves based on kung fu. “Such a narrow-minded attitude does not help at all,” Mr. Park said.
The comment boiled up more online controversy, as Internet users reacted sharply both for and against Mr. Park. Those who opposed him said people can’t deny that the Korean wave comes from Korea.
The producer wrote a response yesterday on his Web site, saying, “It is my dream to overcome this modern age in which we think our country and our nation are only the best,” he said.
Mr. Park, himself a former star singer, has fostered a round of successful pop singers through his company, JYP Entertainment.