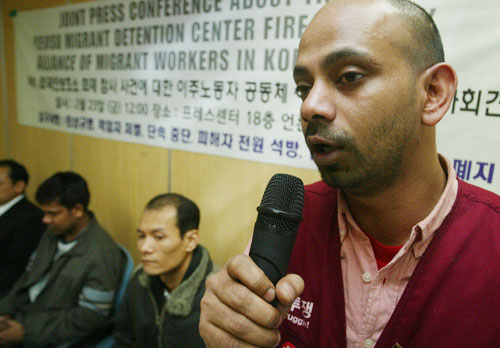 Eight migrant worker organizations held a press conference yesterday at the Press Center and demanded that the cause of the recent deadly fire at the customs and immigration office in Yeosu be established. They also asked that such facilities be abolished. The Yeosu custom’s office is the only regional custom’s office with protective facilities for immigrants.
The exact cause of the fire that killed nine and injured 18 people on Feb. 11th has yet to be determined, but arson is one possibility. Eighteen injured migrant workers, including two who are being held at protective facilities for immigrants in Chungju, are being kept in custody pending further investigation.
In a joint statement the organizations said, “This problem transcends the issue of those killed in the Yeosu fire, it is the problem of 200,000 unregistered immigrants. We are anxious that this might happen again.”
The statement continued, “Migrant workers work assiduously for the development of the Korean economy, but we are treated like animals, not humans.”
The statement further read, “Three years is too short a period in order to pay off the debts we made to come to Korea and save. The Korean government needs to accept that it cannot rely on deportations and regulations to solve the migrant worker problem. Migrant workers are not like batteries; you can’t just throw them out when you’re done with them.”
The organizations requested a full investigation of the Yeosu fire and punishment of those responsible. They also requested the release of the survivors.