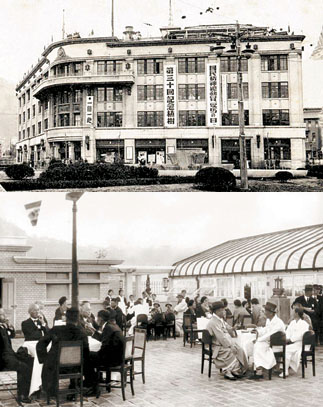 Top: The original department store was built in 1930. bottom: When it was the Mitsukoshi Department Store, the rooftop garden served as a salon for intellectuals and socialites. Provided by the company

Openings can be dangerous, as Pandora discovered to her cost. For generations the granite jewel box of a building that stands on the plaza between Myeongdong and Namdaemun has been a source of drama. When Shinsegae unveils its new store there tomorrow, Koreans with deep pockets will have a place to shop that is genuinely world class. Whether Shinsegae’s owners will, like Pandora, rue the day their shiny new box was opened remains to be seen. An economy that may be teetering is not the best environment for such a large investment.
The new store maintains the original Art Deco architecture of the 1930s but its street-level windows are dominated by global luxury brands like Hermes, Chanel and Tiffany, a move designed to announce that Korea, and Shinsegae, are leading players in the global economy. The interior space, covering 10,032 square meters from the basement to the sixth floor, has been used for generations as a luxury bazaar but, with its rebirth, Shinsegae is hoping to generate another series of record sales.
With tomorrow’s opening, the department store will consist of two structures, the existing 19-story-high new branch building and the renovated main store. Together they will cover 56,688 square meters of the city’s prime commercial estate in northern Seoul. While the 53-month renovation of the main store was underway ― led by RYA, a design consultancy based in Dallas, Texas ― the parent company, Shinsegae Co. Ltd., opened the store’s new branch building in August 2005 with record-breaking sales of 6.84 billion won ($7.28 million) on its first day. The figure beat another sales record posted when the Seocho-dong Shinsegae Gangnam raked in 4.8 billion won on its opening day in 2000. 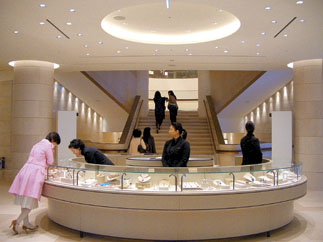 The structure of the store’s monumental staircase, its original centerpiece, was kept intact.

At a press conference last week, Seok Kang, the chief executive of the company’s department store division, said that alongside new construction developed with the support of the city government, Shinsegae will become a hub for downtown areas such as Namdaemun, Myeongdong, Gwanghwamun and the brand-new Post Tower, formerly the Central Post Office, which is due to open next year.
The reconstruction and grand opening of the original Shinsegae Department Store has been under public scrutiny because the building is a piece of living history that dates back to the Japanese colonial era. The store originally opened as the Seoul branch of the Japanese Mitsukoshi Department Store on Oct. 24, 1930 and was reported to be “the best department store in Korea and beyond Manchuria.” Its rooftop garden was a salon where journalists, writers and the social elite savored tea and exchanged intellectual conversation dressed in Western clothing, which had just come into style.
The store introduced many modern forms of commerce to Korea, including the price tag system and hospitable sales clerks, as well as the concept of semi-annual sales and in-store art galleries. It was a young and hip breed of ’30s trendsetters ― called “modern girls” and “modern boys” ― who descended upon Mitsukoshi at a time when shopping in Japanese-style department stores such as Hwashin, Kikakai and Georgia fascinated wealthy locals. Women with wavy hair dressed in modernized hanbok with stockings over a pair of Mary-Janes and men sporting a dandy look complete with fedoras and Western suits were the main actors on the scene. 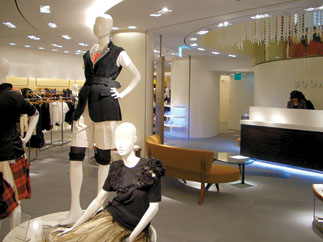 Shinsegae’s innovative fashion concept store, Boon The Shop, is among the store-in-store boutiques on the fourth and fifth floors, specializing in merchandise directly purchased by the department store. The American visual merchandiser Rachel Arnold collaborated with the store.

In 1945 the late founder of Samsung group, Lee Byung-chul, purchased the store and renamed it the Donghwa Department Store. But then the Korean War began and for several years it was used as a post exchange by the American army. In 1963, the store was given the name Shinsegae.
The social climate for consumption and capitalism changed drastically in post-war Korea. The Shinsegae main store building was used as a backdrop in several works of Korean literature. In his 1937 novel, “Taepyeongcheonha” (“Peaceful World”) the author Chae Man-sik describes the Mitsukoshi store as a symbol of modern capitalism; the male character’s young mistress suggests that he have a Western-style “lunch,” which, to his taste, was expensive and disagreeable. In his 1936 debut novel, “Nalgae” (“Wings”) the novelist Yi Sang describes a man threatening to jump from the department store’s roof, which, in his work, symbolizes the world of hedonism and despair as seen through a young man’s eyes.
As Korean society embraced the social changes of the ’60s, the store’s new name, which means “new world,” was appropriate to the mood of the period. The store chose this moment to establish the relatively new occupation of retail sales as an integral part of the economy. The store hired female college students as sales clerks for the first time in Korea and offered “jobs-for-a-day” to 2,000 housewives. Working in sales had been considered to be shameful work, and, during the early years, some Shinsegae staff would hide when their relatives were in the store.
Shinsegae has been known for its older clientele, but its customers are getting younger and seek more and more products from the global fashion market. According to Lee Young-jae, the director of the main store, 56 percent of their customers are now under age 40. The store’s prestige marketing tactics are apparent in the inclusion of its first store-in-store Hermes and Giorgio Armani boutique. Continuing the tradition of supporting the arts, Shinsegae will open the Trinity Garden, an outdoor sculpture garden, on the rooftop. It currently has works by Henry Moore, Louis Bourgeois, Joan Miro and Alexander Calder. Guido Stefanoni, who previously designed other Shinsegae properties such as Boon The Shop, Gramercy Kitchen and Vecchia e Nuovo, worked on both the interior space and rooftop gallery. Shinsegae’s Boon The Shop was the country’s first successful luxury fashion boutique/store-in-store to sell high fashion brands. The company has now gone further by turning two entire floors of the main store into a select fashion gallery where over 50 brands are sold directly by Shinsegae. Such a move is viewed as the company’s effort to lead and reform the local department store system, which is based on the real estate model used by Japanese stores in which retailers rent space and the department store owners make their money off the real estate transaction plus commissions. 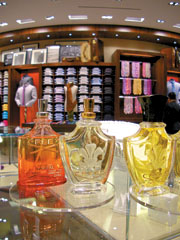 Often compared with France’s Le Bon Marche because of their similar histories and marketing positions, Shinsegae executives said they visited the Paris department store, as well as Bergdorf Goodman and Henri Bendel of New York, to study trends and techniques. “We’re certainly aware of Korea’s unique distribution system. For us, expanding our Boon The Shop concept to the main store’s fourth and fifth floors didn’t come easy, as change is often met with resistance,” said Mr. Kang, “But we’re doing everything we can to charge forward.”
Shinsegae has ensured that its new store will start life in a memorable way. To celebrate the grand opening, it has organized a fine jewelry exhibition, and invited the world- renowned performance artist Vanessa Beecroft and Japanese pianist Yuhki Kuramoto to perform. Chanel Korea, which is known for its independent fashion shows, will also showcase its 2007 collection in the store.
Pandora unleashed all of mankind’s despair when she opened her box. Those venturing into the Shinsegae store will have a different experience. If shopping is this country’s new religion, then this store is its cathedral and a beautiful one at that. A walk through the hushed corridors on a stressful day can provide the kind of pure retail therapy that Holly Golightly used to get from taking breakfast at Tiffany’s.