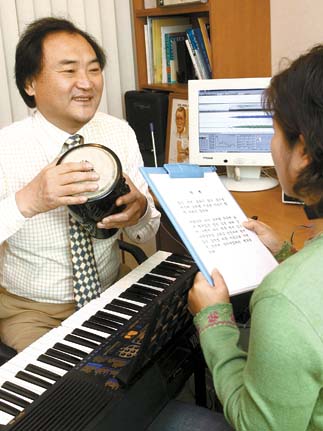 A doctor who specializes in vocal chord and voice box surgery consulting with a patient who wants a better voice to improve her job prospects.

Ahn Yun-seon, a fourth-year student at a Seoul college, needs her parents to give her some money. The cash is not for clothes or to buy more books. Their financial support is necessary to pay for cosmetic surgery, which Ahn wants to have before she begins a series of job interviews.
“If it costs several hundred thousand won [a few hundred dollars], I can manage to pay by installments,” she said. “But I think it will exceed one million won, so I’m going to need my parents’ help.”
Ahn is ready to go under the knife for the sake of getting a good job. She said she “needed” a set of straight teeth and “nice pinkish gums” to enhance her smile.
Cosmetic surgery and orthodontics have become commonplace among celebrities and TV personalities, but Ahn is not in search of a job in showbusiness. All she dreams of is a stable position at a decent company with a big name, preferably one of Korea’s ubiquitous conglomerates.
“Nose and double-eyelid procedures no longer count as special surgery because they are so common among job seekers,” she said.
Ahn is one of many young job seekers who believe cosmetic surgery can increase their chances of getting a good job.
Recently the employment Web portal www.career.co.kr has seen a sharp rise in searches using the phrase “chieop seonghyeong,” which means “employment cosmetics.” Meanwhile a survey by the Korea Research Institute for Vocational Education & Training showed that over 80 percent of respondents in their 20s expect the jobless rate to worsen.
Taking these two together, it’s clear there is considerable apprehension among young people seeking their first job. 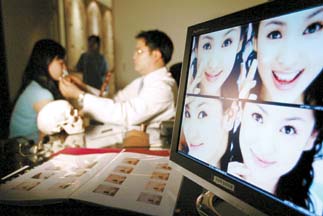 “I have another job interview coming up, and I realized my appearance does make a big difference,” read one anxious posting on the Web log of a cosmetic clinic. “I want my face to be smaller and my forehead narrower. When do the scars go away?” the blogger asked.
Another wrote that she is frightened because she has been told she cannot go to interviews with “small eyes.”
“How much will it cost to make my eyes bigger?” she asked. “Would double-eyelid surgery work?”
In a survey by the Internet portal Empas nearly 60 percent of young job seekers surveyed said they believed good appearance had “a profound influence” on an employer’s hiring decisions.
Employers agree that appearance affects their decisions. In a survey by the employment site JobKorea.co.kr, 65 percent of the 870 personnel officers surveyed said appearance “affects to some extent” their hiring decisions and over 75 percent said they had, on at least one occasion, given a candidate a negative evaluation because of their looks.
Kim Sung-min, a plastic surgeon at Imi Plastic Surgery, said he had been swamped from January to March because of young clients looking for “employment cosmetics.”
“Nearly 30 percent of our patients are seeking to change their looks for job interviews,” Kim said. “Sometimes they come during their third year, saying they want their face to look natural by the time they start job hunting.”
One of the most popular choices for these patients is what’s called “noble cosmetics,” in which a person with protruding lips or a sunken forehead is sculpted by scalpel to look more round and “elegant.” There is also the “face remodeling” operation, which means fat grafting to give the face more balance.
“In the past, patients asked for a specific nose or eye shape,” said Kim. “But those preparing for job interviews want surgeries that will enhance their overall facial image.”
Along with facial sculpting, however, other doctors say they are being asked to perform more exotic procedures such as surgeries to change voices or create specific gum shapes, earlobes and even palm lines that are supposed to bring luck in employment.
A 28-year-old woman who declined to give her name said she hated her hook nose and the wrinkles in the middle of her forehead. She thought her nose and wrinkles made her look cranky. Her anxiety increased when a physiognomist said that her face suggested somebody with “an unstable life.”
With a job interview looming, she decided to change her nose and protruding forehead to ward off any bad luck. 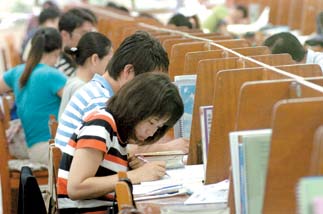 Many students fear that studying is not enough to secure a good job and are trying to improve their chances via cosmetic surgery.

Another man in his 20s was also concerned about his nose and forehead.
“I did not look sharp because my nose was so flat and, with a flat forehead, I actually looked dumb,” he said. With such features the young man believed he would be rejected by employers, so he went to a plastic surgeon.
Hospitals are seeking to exploit this new market. Many now advertise specialist surgeries, specifically designed to enhance a candidate’s job prospects. For example, the Park Hyun Plastic Surgery Clinic became popular among job seekers after it claimed that it specialized in “physiognomy cosmetic surgery tailored to secure a better job and marriage.”
According to the hospital, its cosmetic surgeons will not only correct defects, but will also undertake surgeries based on the ancient Chinese theory of yin, yang and the five primary elements.
In yin/yang physiognomy, a clear and bright facial complexion means good luck, so a lot of patients ask to have their facial blemishes removed, the hospital said.
Palm line surgery has also become popular. This operation puts a deep cut into the patient’s palm, joining a series of dots. The cut has to bisect the dots and existing palm lines, in a specific fashion to enhance the patient’s chance of employment or success in businesses, palm readers say.
Despite the dangers involved with this kind of operation, over 70 percent of respondents to a survey conducted by www. mimi.co.kr, a cosmetic surgery site, said they would endure palm line surgery if they thought it would change their fate.
Yoo Jong-oh, a palm reader who operates www.sonkum.com, said he had been surprised by a notable increase in clients aged 20 and below.
“They ask for the exact spot where the cut should be, because their doctor told them to find out,” he said.
Yoo claimed he tries to dissuade young job seekers from getting palm line surgeries, after an experience with a client who complained the surgery had left him with a “disgusting scar” and no job.
“Palm reading is scientific, but this trend is making it look like a fraud,” he said. “Making an artificial palm line is not scientific at all.”
Meanwhile, another popular operation among job seekers is a voice change for clearer pronunciation and a pleasant tone. 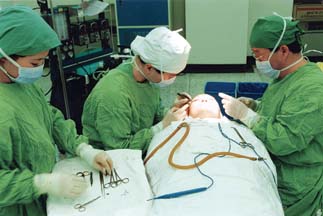 A third of the patients at some plastic surgery clinics in Seoul are trying to improve their job prospects. [JoongAng Ilbo]

A woman in her 30s said she was scared about speaking to a group because her voice trembled. In interviews the situation got worse. She said she even went to a psychologist for five years, assuming that the problem was in her mind.
But when she went to a plastic surgeon who “specialized in voices,” she was diagnosed with spasmus glottidis, or throat cramps. After Botox injections, her voice instantly stopped trembling and she wept with joy.
“I have the confidence to look for jobs now,” she said.
According to the Yesong Voice Center, the majority of patients who suffer from voice problems say their biggest concern is the impact their condition might have on their job prospects.
“In the past, the techniques for diagnosing problems with vocal cords were very crude, but they have become much more sophisticated and now it’s easier to identify precise problems and correct them,” said Kim Hyeong-tae, a doctor at Yesong, explaining that the number of voice specialists has grown rapidly. He advised people whose voices make them feel anxious about their job prospects to seek help as soon as possible.

“Most people think that hoarse or wheezing voices sound natural, but that’s wrong,” Kim said. “When a voice sounds different, it is a sign that you are suffering from a disorder.”
Ears have also been going under the knife.
Park Sang-hyun, a doctor at L Plastic Surgery in Bundang, says ear surgeries are most popular among aspiring air stewardesses and bank tellers.
“These occupations require women to have their hair combed or tied back,” Park said. “But if you have a complex about how your ears look, you will not want to tie back your hair.”
He said most of his patients are those with “donkey ears,” a type with pointy tips, or “Mickey Mouse ears,” the flappy round type associated with the Walt Disney character.
Lee Young-ran, a plastic surgery counselor at the Cohen Clinic in Seoul, said she specifically asks what occupation young patients are aiming at.
“It helps to know more about the patient before we advise them to go through a certain operation,” she said.
She said knowing the nationalities of a future employer can also affect the type of surgery a patient should select.
For example, those who hire flight attendants or models in China are known to prefer the plump cheeks and rounder shape that they believe brings out the cuter side of a young Asian face.
“But of course, the image has to suit the patient’s face first,” said Park Gwi-ho, a Cohen Clinic doctor. “Plastic surgery is not something that should be undertaken just because everybody else is doing it.”