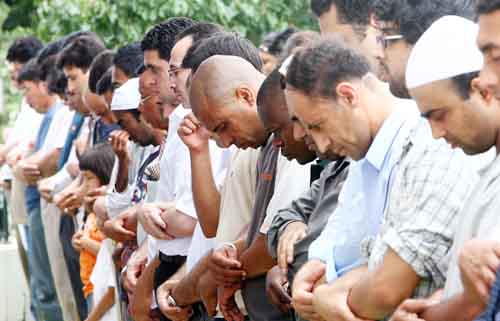 Muslims pray Friday at a mosque in Hannam-dong, Seoul, for the safe return of the Korean hostages being held in Afghanistan. The Korea Muslim Federation, the country’s only Islamic organization and owner of the mosque, issued a statement calling for the immediate release of the hostages kidnapped by the Taliban. [YONHAP]


With police officers standing guard nearby, a textile merchant got down on his knees at the only mosque in Korea and prayed for the safety of the hostages being held captive in Afghanistan.
A few minutes later, the 50-year-old Nigerian said he’s lived in Korea five months and had never felt sorrier for the people of this country.
“It is very sad,” said the man, who asked to be identified only by his family name Hussein, as he walked down the steps of the mosque along with scores of other Muslims. “It’s against the rules of Islam to kill innocent people. Islam is peace. No one can kill.”
Hussein attended a special service at the Itaewon mosque on Friday calling for the safe release of 22 Korean hostages being held by Taliban militants in Afghanistan.
The militants killed Pastor Bae Hyung-kyu, the leader of the volunteers, on Wednesday.
“I know every Muslim in Korea is praying for the bereaved family,” Hussein said, “and we pray for the Korean hostages to be released. I have no doubt God will respond to everybody’s prayer for them to be released very soon.”
Eleven days have passed since a group of Korean Christians, mostly volunteer workers, traveling on a bus from Kabul to Kandahar in southern Afghanistan was seized by the Taliban.
About 600 Muslims gathered at the 1 p.m. service Friday. That same day, the Korea Muslim Federation, the country’s only Islamic organization, issued a statement calling for the immediate release of the people in Afghanistan.
“We, the Muslims in Korea, express our deepest condolences to the Korean victim in Afghanistan and share his family’s sense of bereavement ... The Korea Muslim Federation strongly demands that the Korean hostages be released and is appealing for their safe return,” the statement said.
The federation, with 140,000 members, released its first statement calling on the insurgents to free the Koreans a week ago today.
Because some threats toward Muslims have been reported recently, the Yongsan Police Precinct assigned two officers to patrol the grounds inside the mosque and two officers to stand guard outside the main entrance. At times, riot police have been dispatched to watch over the mosque.
According to Kim Jin-kuk, one of the dispatched police officers, some Koreans have called in and threatened to blow up the Muslim mosque, but there have been no incidents so far.
“Some Muslims here said they are worried about a ‘reverse terrorist attack,’ but there has been no violence against them,” Kim said, while patrolling inside the mosque.
Abdulrashid Waesoho, 61, an Islamic missionary from Thailand, said the Muslim community in Korea is worried about a backlash.
“This might work more against us ― we are worried,” he said.
The missionary said he had never heard of any big crimes committed by Korean Muslims during the 25 years he has lived in Korea. He said he wished Koreans would understand that most Muslims are innocent and good citizens.