A. An econmy dependent on exports needs to conform to global standards.

A. An econmy dependent on exports needs to conform to global standards. 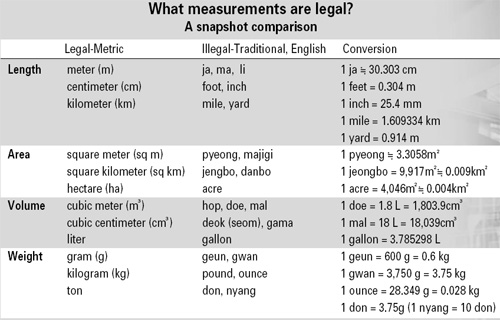 Most Koreans know at least some of the hundreds of proverbs and old sayings that use traditional measurement terms such as doe, chi, ja, mal ― which must soon give way to meters, grams and liters.
A law banning those traditional Korean measurements went into effect on July 1.
Under the new rule, the evocative line “splendid rivers and mountains that stretch 3,000 li,” in the Korean national anthem, some Koreans jokingly say, might have to be replaced with “1,178 kilometers.”
In fact, there’s no need to worry about that because the guideline applies only to commercial use. Traditional measurements will be given a probation period except for pyeong (a measurement for space) and don (a measurement for weighing items like gold).
Since July 1, all business transactions, government bulletins, advertisements and media reports that use these two measurements are subject to fines of up to 500,000 won.
Pyeong and don were adopted during the Japanese colonial period (1910-45), replacing the traditional measurements joom, dan, jim and muk that had been used in Korea since the Gojoseon period.
This is not the first time that the Korean government has enforced a law on measurements.
In 1961, a government restriction on the use of traditional measurements was a failure. The government tried again in 2001 with a new measurement system but the policy met harsh protests from local media and the public.
Although more than a month has passed since the new law took effect, many are still complaining about the inconveniences the new system has brought.
For example, a realtor will not be allowed to describe the size of an apartment unit as 33 pyeong. According to the law it is 109 square meters.
The size of a 30-pyeong apartment could differ by up to 3.3 square meters depending on how a developer calculates a single pyeong because pyeong cannot exactly be converted to the metric system. One pyeong is usually calculated as 3.305 square meters.
Jewelers also say they are confused because they cannot use don. Given that one don is equivalent to 3.75 grams, a half-don can lead to an error of about 0.005 grams.
According to a survey in seven major cities across Korea by the Ministry of Commerce in June last year, 88 percent of real estate agencies used pyeong and 71 percent of jewelers used don. A total of 2,478 uses of traditional measurements were found in textbooks used in middle and high school, another recent study showed. Even reporters who cover economics must use a calculator to convert traditional measurements into standard ones.
In some economically advanced countries such as the United States, despite having introduced meters and grams decades ago, many citizens still cannot drop the long-engrained habit of using feet, yards, miles and ounces.
Why then is the government striving to standardize measurements in Korea?
A look in the history book shows that one of the key drivers for such alterations was a change of regime. 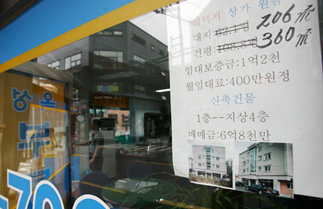 Just as China’s first emperor of the Qin Dynasty, Shi Huangdi (a Chinese word meaning first sovereign emperor), reformed measurement systems and culture in a sweeping assertion of his power, many rulers have done the same ― a symbolic act requiring people to accept new standards now that their country has changed.
Another key purpose of reforming measurement standards is more utilitarian.
During the Joseon Dynasty, different regions used different scales and measuring tools, causing confusion among buyers. Corrupt government officials collected bigger taxes by manipulating measurement standards. Unifying them was not only intended to make economic activities more efficient but also to bring about social justice.
In today’s globalized society, unified measurement standards are beneficial to corporate sectors. Companies get into trouble with their export or import partners when products have different sizes or weights due to incorrect measurements. (An economy dependent on exports needs to conform to global standards.)
Changing ancient habits is not that easy.
Measurements in the West and the East have naturally evolved over time, alongside people’s body sizes and objects around them. That means such measurements are deeply rooted in their lifestyles and national sentiments.
It seems highly likely that Korea will experience pain and confusion for some time with the shift to global measurement standards. The government will have to slow down the pace of measurement system reform to mitigate side effects.