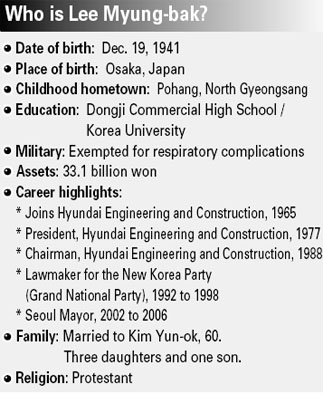 Rising from poverty to become the CEO of Korea’s largest construction company during his tenure at the helm, the dramatic success story of Lee Myung-bak has succeeded in bringing him one election away from the presidency. Brushing aside allegations of past misdeeds, the 65-year-old former Seoul mayor stuck to his slogan ― “The economy! I will revive it!” ― throughout the Grand National presidential primary campaign, and it worked. Yesterday he won the party primary after a tough and often nasty battle.
After his term as Seoul mayor ended in June last year, Lee consistently topped opinion polls asking the public to name its choice for president. While his lead shrank over time, apparently due to a series of allegations focused on financial and real estate misdeeds, he held on. Prosecutors have temporarly supended an investigation into suspected real estate speculation involving Lee’s relatives and his alleged involvement in financial fraud.
Acutely aware of the power of his finely honed story, Lee has insisted that he is the ultimate self-made man, a symbol, in effect, of Korea’s own remarkable rise. In his 2005 autobiography, “This is No Myth,” he laid out the details of his ascent.
Born Dec. 19, 1941 in Osaka, Japan, where his father worked on a cattle ranch, Lee returned with his family to Korea shortly after Japan’s defeat in 1945. But they arrived with nothing because the boat they traveled on sank. Growing up with his three sisters and three brothers in Pohang, North Gyeongsang, his childhood memories are of extreme poverty, Lee has recalled.
After graduating from evening classes at Dongji Commercial High School, Lee went to Seoul with the dream of becoming a university student. He worked as a laborer during the day and studied for the university entrance examination at night, finally gaining admission to Korea University, where he majored in business administration. He earned his tuition by working as a garbage man.
In his junior year, Lee ran for chairman of the student council at Korea University’s college of business management, getting his first taste of politics.
He won the position, but he also got involved in street politics, and his participation in the 1964 student demonstrations against the normalization of Korea-Japan relations earned him six months in prison for leading the protests. The conviction became a major obstacle in Lee’s search for a job, but his friends later said the experience only fueled his ambition.
Lee applied for a job at Hyundai Engineering and Construction, but was blacklisted because of his student activism. He then wrote a letter to President Park Chung Hee, criticizing the administration’s policy of barring student activists from entering mainstream society. Whether the letter was the reason or not, Lee’s persistence paid off and he was finally hired by Hyundai in 1965, an event that changed his life forever when he met his mentor, Hyundai founder Chung Ju-yung.
It was the right move both for the company and Lee. Hyundai Construction had just 90 employees then and it was just beginning to win lucrative projects in the Middle East during the time when Korea was rising as an industrial power. Lee climbed to the top fast. He became an executive in five years, and after 23 years was appointed chairman of the firm, which by that time had about 160,000 employees worldwide.
Chung and Lee, however, parted ways in 1992 over political differences. Lee left Hyundai after 27 years to join the New Korea Party, the predecessor of the Grand National Party, and entered politics as a legislator in 1992. At the time, Chung established his own political party, ran for president and lost to Kim Young-sam.
In 1996, Lee won a legislative election to represent Seoul’s Jongno DDistrict, but lost his seat due to an election law violation for overspending campaign funds. “It was the biggest mistake of my life, and I still regret it deeply,” Lee has said about the incident.
After spending a year in the United States, Lee returned to Korea to make a comeback. In 2002, he was elected Seoul city mayor after two earlier tries had ended in failure. The restoration of the Cheonggye Stream downtown and reform of the public transportation system have been endlessly touted as the major achievements of his tenure.
In May this year, Lee officially declared his ambition to become a CEO-style president for Korea. His campaign promises to reinvigorate the economy, partly by building a grandiose transport canal that will connect the Han River to the Nakdong River in the south. While critics say the canal is impractical and unnecessary, he also promises 7 percent annual economic growth and an eventual rise to a $40,000 per capita income.
Can he do it? Associates have said Lee is shrewd and tough, a survivor of the cutthroat corporate world who is now in the battle of his life for national power. No one counts him out.