Master mason chisels his reputation out of stone

Master mason chisels his reputation out of stone 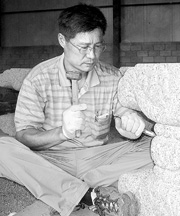 After 32 years, Lim Dong-jo has carved out a place for himself among the bevy of artisans who practice traditional stonework.
The 52-year-old joined the ranks of 12 masonry meisters on Oct. 19 by appointment from the Ministry of Labor and the Human Resource Development Service.
Those selected as the best technicians in their fields have worked in their respective areas for more than 20 years and exhibited remarkable creativity. Since 1986, 449 artisans in 83 fields have been named masters.
“I feel undeserving of such status when there are masons with better technique and passion working without recognition,” Lim said. However, his contemporaries disagree; Lim has all the country’s renowned masons to thank for his nomination.
Lim was born in 1955 in Gwangsan, South Jeolla. He came to Seoul as a youngster with his brother, who is seven years his senior. “It was a time when everybody wasn’t financially stable,” Kim recalled. “My brother started working as a mason and I thought I might as well do the same because I had nothing else to do.”
While learning from his brother, Lim started working at the building site of the current National Folk Museum in 1969. He was only 14 then.
“One day, I was just hammering hard, and An Gi-ho, the head mason, came up to me and said: ‘You have talent, boy. Keep it up.’” Lim decided on his career at that point.
Lim has worked primarily in restoring traditional stone structures. The Jajeongjeon in Gyeonghui Palace, Seonjeongjeon and Injeongjeon in Changdeok Palace and the Jijangam on Odae Mountain all recovered their old glory with Lim’s masterful touch. He is currently working on the Gwanghwamun project.
Lim works with some 15 other masons who are mostly older than 60. They work outdoors, so the time during which they can work is limited to only six months of the year.
Because masons can only earn money during this six-month period, Lim worries that the field lacks appeal to younger generations.
But his son, Lim Gyeong-muk, 27, began learning stonework three years ago. “He used to visit my work site, and after college he decided to continue the family business,” Lim said.