In the midst of death, let’s have a party

In the midst of death, let’s have a party 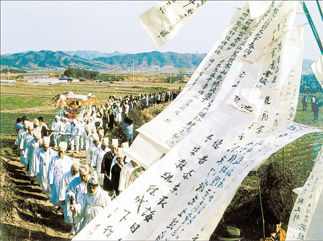 A funeral cortege photographed by Kim Su-nam showing a long queue of mourners singing songs in memory of the deceased. Provided by Daewon Publishers

Park Ki-ok fondly remembers the entertaining hustle and bustle of the funeral for an elderly relative in 1957. Funerals then still used traditional rites, which were more like festivals in which the living blessed and commemorated the dead.
The funeral, under a hot summer sun, lasted through five long days of wailing and singing. It was more like a feast where everyone who knew the deceased enjoyed themselves. From the flamboyantly decorated bier for the deceased to the endless feast for the living, the traditional funeral was more like a boozy symposium on the meaning of life and death.
Attracted by the charm of the festivities, Park, then in her twenties, developed a keen interest in traditional funeral culture. Now in her 70s, Park is old enough to know the grief of losing loved ones. Two years ago her husband passed away, and Park decided to commemorate his passing by opening a museum specializing in the culture of traditional Korean funerals.
With some 1,000 funerary artifacts collected over more than 50 years, she converted her spacious home in Hongji-dong, central Seoul and opened it as a museum this month. 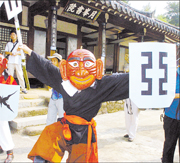 A mask used to drive away evil spirits at funerals and figurines that decorated biers. By Kang Uk-hyun

She called the museum Shuim, meaning “to take a rest” in Korean, based on the idea that death is like a break between this life and the next.
Lim Jae-hae, professor of folklore at Andong National University, agrees with Park about the festive and beautiful traditions of the Korean funeral.
“There is a Korean saying that the best way to console the bereaved is to make them laugh,” said Lim, who is also the author of “Traditional Korean Funerals.” “From fun and games to dramatic performances, a funeral meant days and nights of playing, eating and drinking,” Lim said. “Except for the presence of a coffin and the hemp clothing of the mourners, it was like a wedding.”
He sees traditional mourning rituals as a process to “sublimate the grief and darkness of death into the happiness and brightness of life.” It is an acceptance of death as part of life. “Death is a sad farewell to the beloved and a reminder of human frailty,” he said. “However, Koreans used to see funerals as a chance to overcome sorrow with laughter,” Lim explained.
Kang Dong-gu, a professor specializing in funeral rites at Dongguk University, described funerals of the past as an important part of socialization. “A funeral was a ritual where people reestablished their identity within the community,” Kang said.
Lim has visited traditional funerals in places like Jindo Island, South Jeolla, where locals perform dasiraegi, a song and dance ritual around an empty bier the night before the burial. “People sing songs and perform comic routines that have overtones of sex and thus refer to rebirth ― the rituals are a compensation for the feelings of loss they are having,” he said.
Making a festivity of a funeral was a practice that became a focus of criticism during the Joseon Dynasty (1392 to 1910), when Confucianism prevailed and solemnity was the rule, Lim explained.
As time passed, folk customs became conjoined with Confucian traditions, making a traditional funeral an “interesting mixture” of all things Korean. Under the strict Confucian tradition of filial piety, the bereaved sons are seen as sinners who could not save their parents from death.
When a parent passes away, the sons wear mourning garments made of rough hemp cloth. To display their status, the bereaved often wear the garments in a strange way, such as not putting the sleeve on properly.

The principal mourners, led by the eldest son of the deceased, are not allowed to eat for three days. The Confucian funeral process lasts for three years, and the mourners endure a limited diet, including a prohibition on eating meat.
When death approaches, family members should be in attendance. The process starts with a ceremony called sokgoeng, when a small tuft of cotton is put beneath the dying person’s nostrils. The theory is that if the cotton stops moving, the person’s stopped breathing. Next the principal mourners take the deceased’s clothes into the yard and cry out the Chinese word bok, meaning “coming back,” three times.
Koreans believed that a messenger from the underworld took the dead against their will, and with this ritual, which Koreans call chohon, meaning “invocation of the spirit of the dead,” they believed that they could bring the spirit back to its body.
Death is confirmed only after this ceremony, and from then on, the bereaved family prepares for the funeral.
The dead body was given an offering of rice and money was placed in the person’s pockets for the journey to the underworld.
The body was then washed in water scented with aromatic junipers and dressed. The hands and legs were tightly bound, for fear that the deceased will return as a wandering spirit.
Lim noted that this is an interesting contradiction between the Confucian idea and Korean folklore that stresses fear of the underworld. When the body is fully dressed, the mourners start to accept visits of condolence.
In the case of a father’s death, sons greet the visitors holding a bamboo stick. For a mother’s death, they use a paulownia tree stick.
A hollow bamboo stick means that a father was exhausted while serving his family, and a paulownia tree stick implied that a mother was filled with concerns and worries for her children. Visitors pay their respects to the deceased and the mourners by bowing and exchanging words of consolation.
Koreans place great importance on the bier as a temporary residence for the journey to the other world.
There were traditionally two biers, one for the dead body and the other for the soul, the latter being smaller.
A traditional bier for the dead was decorated with ornaments in the shape of lotus flowers, a Buddhist symbol of reincarnation, and several wooden figurines of human shapes, representing servants of the dead person. On top, there were carvings of messengers who would lead the dead soul to the underworld. 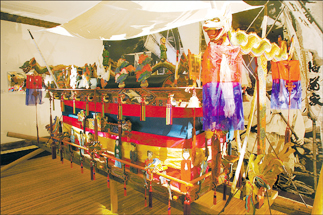 A traditional funeral bier decorated with figurines and ribbons believed to protect the souls of the dead. By Kang Uk-hyun

These figurines were painted in the five colors of yellow, blue, white, red and black, symbolizing the five basic elements that form the universe.
A major part of Park’s Shuim collection consists of figurines from these biers. To protect the bier from evil spirits, and in the hope of safe passage to the other world, Koreans decorated it with paintings of a dragon, goblins, phoenix and chickens.
After several rites to pay respect to the deceased, the mourners remove the bier from the house after several nights of performances, feasting and mourning.
The funeral cortege to the graveyard would start with a performer wearing a goblin mask to drive away evil spirits, followed by dozens of pallbearers.
The chief pallbearer played a key role by singing songs for the deceased, which were mostly narratives about the dead person’s life. The mourners following the bier would sing along.
This was also a chance for the mourners to cry and grieve to their hearts’ content, following the trail of the deceased to the graveyard. A parade of flags made from silk or mulberry paper would follow, inscribed with stories about the deceased written in fine calligraphy.
Arriving at the graveyard, the coffin was taken from the bier and lowered into the grave at a specific time, which was carefully selected to bring good luck.
Such traditions, however, have vanished with the passage of time.
Not surprisingly, Lim has many complaints when it comes to current funeral practices, which have turned dying into a “simplified formality.”
Modern funerals usually take place at a hospital funeral suite, where visitors give the bereaved money and are treated to a meal and alcohol in return.
Lim resents the idea as “some kind of business deal among the living that isolates the deceased.”
“Even the flowers are placed facing toward the visitors, bearing ribbons to tell who sent them,” he continued. “They are not a heartfelt commemoration of the dead, but a way to show off a person’s connections.”
Kang of Dongguk University echoed this sentiment. “It is a pity that the beauty of our funeral culture has been lost, because it implies that people today no longer take enough time to appreciate their own lives.”