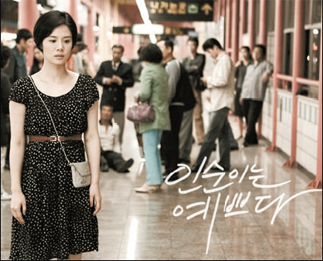 Kim Hyun-ju stars in “Insuni is Pretty,” in which even scarred hearts have hope. [KBS-TV]

One hot summer day, I was having the worst blind date of my life. Well, let me correct myself ― one of the worst blind dates of my life. It wasn’t my date’s fault. He was a decent, eligible gentleman who worked as a radio news reporter. According to our mutual friend, he seemed to be quite like a Darcy figure from Jane Austen’s “Pride and Prejudice.”
The friend had high expectations for the setup, because my partner and I were in the same profession. However, it didn’t take long for the grim reality to set in. Life is not that perfect.
The date, whom I’ll just call Mr. Kim here, was a person I would like to meet as a junior reporter at work, not as a date for my precious Saturday afternoon. For a good two hours, he kept on about how the six-party North Korean disarmament talks were going on and bragging about his brief encounter with U.S. Secretary of State Condoleezza Rice during a business trip to Beijing. Every 20 minutes, he checked his cell phone and called the office to tell his subordinate to keep a close eye on the disarmament talks.
By that point I had heard more than enough. That Saturday afternoon, I had ambitiously donned my flowery new summer dress. After one hour, I gave up my thin thread of hope and started to discuss the Blue House’s attitude in dealing with the North Korean nuclear issue. He called me later for another Saturday outing, but I could not spare any more afternoons talking shop on my day off.
I thought I had forgotten about this would-be Darcy until I was reminded of him while watching the KBS-TV drama, “Insuni is Pretty,” which airs Wednesday and Thursday nights. It’s a story about a girl with a hillbilly name, Insuni, whose first love is a character named Sang-woo, a TV news reporter. Maybe my real-life Mr. Kim was disappointed by me and intentionally brought up stories about Secretary Rice. Still, Sang-woo in the KBS-TV drama is quite clumsy in expressing his feelings for Insuni.
Even without the memory of Mr. Kim, Insuni is Pretty is a TV drama that is worth remembering. Insuni, played by Kim Hyun-ju, has tasted the bitterness of life. An abandoned waif, Insuni encounters much tragedy during her high school days. In a regular schoolyard fight when she confronts her bullying classmate, Insuni accidentally kills her tormentor. Consequently, she serves years in jail, and because of her criminal record, she cannot find a decent job anywhere.
One day, however, Insuni meets her birth mother, who happens to be a celebrated stage actress. Fearful of a public backlash, her mother asks Insuni to live with her and tries to make Insuni a celebrity, too.
To her mother’s delight, one day Insuni earns fame when she comes to the rescue of a person who is about to fall into the path of an approaching subway train. However, surrounded by the flashbulbs of photographers and luxury clothes, Insuni does not feel quite as happy as she used to be. She misses the true friendships she enjoyed when she was floundering in misfortune.
The virtue of the drama lies in its warmhearted portrayal of people who live with scars on their hearts. On top of the lead character, almost every single supporting character has been through some kind of misfortune. The camera follows their stories and their mistakes from a sympathetic perspective.
After all, people are fragile beings who need to be handled with care. Although a person looks strong, he or she may be hiding in a shell with a wounded self inside.
This drama goes into the shell and shares the stories of how people can find their way back to hope. The answer is in the motivation to keep on living.
And on another note, I’m happy to report that the real-life Mr. Kim has found his Ms. Right. They tied the knot this month, and I wish them the very best.