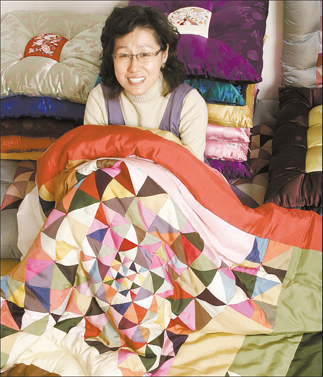 Bedding designer Kang Gum-seong keeps warm under one of her handcrafted duvets. By Kang Uk-hyun

Kang Gum-seong knows the ultimate luxury for a Korean winter. She knows that for many Koreans it’s neither Hermes leather gloves nor a couture coat by Christian Lacroix that truly fulfills.
Kang designs bedding, and much of her intricate embroidery is still done by hand using traditional techniques.
And when winter comes, she knows nothing touches Koreans more deeply than the warm, soft texture of a Korean silk duvet as they slide into bed at the end of a winter’s day.
On a recent chilly morning, Kang sits me in the corner of her small studio in a hanok (traditional house) near the Blue House. The room is heated using ondol (underfloor heating) and she serves me hot green tea.
As I sip my drink, Kang spreads before me her latest duvet designs. These are stuffed with fluffy silk batting, and the bedcover is a patchwork of small triangles and crisscrossing lines.
In Korea, traditional designer-made bedding is more than simply a fashion statement. Many women embrace quilted bedding as a symbol of their identity, similar to the history of quilting for American women.
Korean women believe bedding symbolizes love, rest, fertility and death.
Even today, a bride takes bedding to her new home, a dowry gift officially declaring that her new home is her in-laws’.
“Koreans are meticulous about choosing bedding designs,” Kang says in a soft voice. “The bedding is so intimate for them. They ask for certain colors and designs because they drive away evil spirits or bring good luck. People believe that bedding influences your life because it’s so close to your body.”
Before opening her own shop in Insa-dong, Kang was an ordinary housewife. Like many modest housewives of her generation, she began thinking about her own career after her family obligations were over.
Her children were grown up and her husband started going on frequent business trips, so she set up a small studio.
For a dream that started so humbly, she’s already attracted some lucrative deals. Her designs are purchased by top clientele and merchandisers from high-end stores, including a luxury apparel shop in Tokyo’s Midtown, the rising center of the city’s urban art and shopping district.
“I’ve taken many of my Japanese VIP guests to her studio, and they are fascinated by her work,” says Choi Ji-hye, an expert on royal cuisine who has published several books in Japanese.
“At this stage of a career, most designers leave the hard graft to their assistants, but Kang is very hands-on. She chooses every single color and patchwork design herself. That’s a rarity in this industry,” Choi says.
The lush embroidered peony blossoms of her pillow designs are all completed by hand.
Three years ago, Jeong Yeon-woo, another of Kang’s patrons, replaced her entire Italian bedding collection with Kang’s traditional duvets and pillows.
“Her work is so light and and makes the bedroom homier,” Jeong says.
For her silk duvets, Kang uses traditional colors and needlework style dating back to the 14th century. The method was originally used by women who used scraps of silk to make wrapping cloth.
She uses red, blue, white, yellow and black, colors that symbolize elements of yin and yang and the five cardinal directions of Eastern philosophy.
The needlework, on both the front and back of the cloth, usually requires intensive handwork. 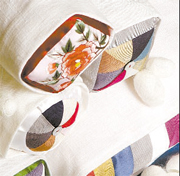 Stitches along the edges are sewn with red thread to resemble the shape of crawling ants, a symbol of prosperity.
On top of the traditional patchwork, Kang incorporates bold, modern designs. To make washing the bedding easier, plastic buttons are attached to the hem of the duvet, so you can simply unbutton them to take off the covers for washing.
In the past, housewives had to rip open the stitches before washing the sheets, and then sew them back up again.
Kang’s says she owes the success of her career to her family. They ran a silkworm farm in Andong, North Gyeongsang, where Kang grew up with two grandmothers, a great-grandmother plus their precious sewing kits.
The three elderly grandmothers invented their own canny ways of producing original home furnishing.
After removing the silk thread from the cocoons of the silkworms, they collected the empty shells and stuffed them into their pillows. They believe the cocoons control humidity, massage the head during sleep and adapt to room temperature.
This idea is an alternative to pillows packed with buckwheat hulls, which is believed to help people sleep better. But the hulls break and create dust, so the idea that Kang borrowed from her relatives is less messy and just as effective.
Kang believes she has definitely found a comfortable niche for herself in the bedding market.
“When I ask myself how it [the business] all happened, I think it was meant to be,” she says.
“And I just realized that the middle character in my name means ‘silk.’”