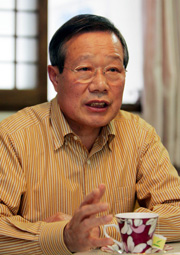 Forty years ago today, on Jan. 21, 1968, a group of 31 heavily armed North Korean commandos slipped into Seoul in the darkness, planning to assassinate the president at the time, Park Chung Hee.
Rev. Kim Shin-jo, then 26, was one of the commandos.
The group’s mission eventually failed, but not before 30 South Korean civilians, soldiers and police were killed, along with 28 of the North Korean agents. Kim was the only North Korean agent captured alive. Two of his colleagues fled and were never found.
Kim gained notoriety for telling reporters, after his capture here, that “I came down to cut Park Chung Hee’s throat!”
Things have changed. Kim is now a Protestant pastor who leads a small church in Namyangjoo, north of Seoul. Over the past four decades, he has become a convert not only in religion, but also in ideology. He has turned into a hard-line anticommunist.
“I am happy that I live in a country where anyone can live a good life when they make an effort,” he said in a meeting with reporters yesterday.
The whole incident gripped the nation with fear for 10 days. The North Korean commandos exchanged gunfire with South Korean police in northern Seoul after they were stopped by police. After a running gun battle, the commandos spread out around Seoul in small groups. Some of them threw a grenade on a bus and others killed five civilians.
Kim, found to have never fired a bullet from his weapon, was put only through an ideological conversion program. He became a member of the clergy in 1997.
Kim said he was reluctant to express his views under the liberal administrations of the past decade. Yesterday, however, he said the government has been too lenient toward the North.
“What has really changed while the South has been pouring out so much money on the North?” he said. “North Koreans are only becoming hungrier and hungrier while the unilateral support from the South is extending the North Korean government’s life.”
Kim said he wants to live “as long as possible” so he can serve as living evidence of North Korea’s spy program against the South. Otherwise, “North Korea will just say they are not responsible for the Jan. 21 incident once I’m gone, like many other incidents North Korea has caused,” he said.