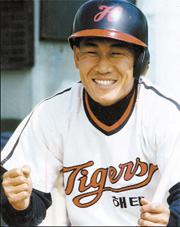 Lee Ho-seong in his heyday as a star baseball player. [JoongAng Ilbo]

A one-time star baseball player was found dead yesterday only a few hours after police named him as a primary suspect in the disappearance of a woman and her three daughters.
Earlier in the morning, the Seoul Metropolitan Police Agency said it assigned 66 officers to find and arrest Lee Ho-seong, a 41-year-old former baseball star whose business career after he retired was marred by failure and fraud.
The police said a body dressed in a dark suit was found in the Han River south of the Banpo Bridge yesterday afternoon. The fingerprints matched those of Lee, the national crime lab said.
The body was found by people aboard a boat at around 3 p.m., police said. No external wound was found on the body. The police said Lee could have committed suicide after they made his name public.
“We decided to go public about the case as of 10 a.m.,” Lee Mun-su, the head of criminal investigations for the Mapo District police, said yesterday.
Police are still searching for Kim Yeon-suk, 46, and her three daughters. “We distributed flyers printed with the suspect’s photo and the charges to the police nationwide,” Lee Mun-su said. 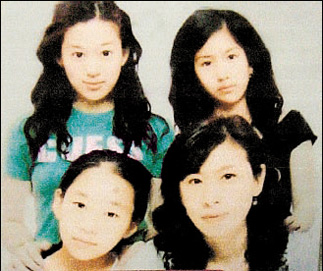 A reward of 3 million won ($3,108) was offered. Police said Kim and Lee have been involved in a relationship for about two years.
“The case is high profile as the entire family of four has gone missing and the suspect is a former pro-baseball player,” Lee said.
Kim and her three daughters, Jeong Seon-ah, 20, Jin-ah, 19 and Hae-ah, 13, were reported missing on March 3. After an initial investigation, the police learned that the last known contact with the family took place on Feb. 18 after Kim, a restaurant owner, told her staff that she was going on a family excursion.
That night, Kim’s neighbors saw a man going in and out of Kim’s apartment carrying a large suitcase. The police said the man was also captured on a surveillance camera.
Police also learned that Kim canceled a time deposit account worth 170 million won on Feb. 15. At the time, Kim was accompanied by the suspect, police said, adding that the whereabouts of the money is being traced.
“We don’t have evidence yet that the missing persons have died,” Lee said. “But the four have not returned home for 20 days, so we cannot rule out the possibility.”
According to the police, the mobile phones of Kim and two daughters have been off since they went missing, but the oldest daughter’s phone had been turned on and off sporadically. The signal on that phone was last detected in Jeongan, South Chungcheong, on Feb. 20.
Lee spent his entire 12-year career with the Korea Baseball Organization’s Haitai (currently Kia) Tigers. He won Korean Series championships with the Tigers in 1991, 1993, 1996 and 1997.
His best season was in 1991, when he hit 21 home runs, had 84 runs batted in and scored 98 runs, all career-best marks. Lee also stole 25 bases that season, becoming just the second KBO player to have at least 20 homers and 20 steals in the same season.
Lee retired after the 2001 season, opening a wedding business in Gwangju that failed in 2003. He also planned an off-track betting business that never took off. In 2005 he was arrested on charges of investment fraud. Two months later, he was released on bail, but was dodging debt collectors.
He was still facing fraud charges when he died.
Lee left Gwangju in early 2006 and has been separated from his wife and son.