UDP decides to leave Rhee on the outside

UDP decides to leave Rhee on the outside 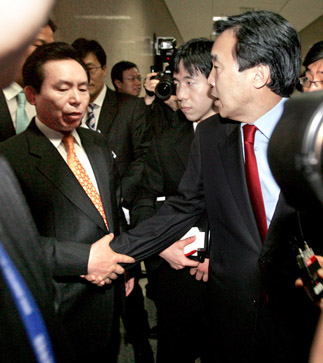 Rhee In-je, left, who ran for president as a Democratic Party member in December, yesterday grabs the hand of Sohn Hak-kyu, chairman of the United Democratic Party, to complain he wasn’t nominated to run. By Kang Jung-hyun

The United Democratic Party has gotten much publicity for adopting strict rules to select its National Assembly candidates this year, but the guidelines aren’t what felled Rhee In-je, one of the top figures in the party.
Instead, a few unnamed officials said, Rhee was not chosen to run because he has bolted his party too many times in the past, whenever it fell out of popularity.
Rhee, a two-time presidential candidate, former labor minister and former governor of Gyeonggi Province, is a UDP member representing his hometown of Nonsan, South Chungcheong.
If Rhee decides to run for a seat in the National Assembly in the April elections, he will have to run as an independent or join the party recently launched by Lee Hoi-chang. If Rhee did so, it would be the fifth time he has left his party or refused to accept its decision.
The news announced yesterday shocked UDP lawmakers.
“What was the standard that Rhee could not reach, when Rhee had a much higher approval rate than his competitors?” asked a lawmaker close to him who declined to be named. “He was the only figure in the Chungcheong region who was certain to be elected.”
One of Rhee’s aides claimed Rhee was “politically assassinated” from the “leftist faction” within the party.
Asked what he will do next, Rhee demurred, commenting, “I don’t have anything to say at this moment.”
The UDP nomination committee eliminated six incumbent lawmakers, including Rhee, from 24 electoral districts outside the Jeolla provinces, a liberal stronghold, in which candidates were chosen yesterday.
Among the 24 electoral districts based in the Jeolla provinces, the committee announced yesterday it had eliminated nine incumbents. The list included Chung Dong-chea, who served as culture minister in the Roh Moo-hyun administration.
Revamping the Jeolla region was one of the main goals of the UDP nominating committee. It had announced it would replace about 30 percent of the incumbent lawmakers in the region.
“I knew we would be sacrificed in the process,” said Shin Jung-sik, a lawmaker who had been a member of the Democratic Party before it merged with the UDP.
Among the nine eliminated, four were former Democratic Party members.