Korean antiques in Gyeonggodang, a shop in Dapsimni antique market in central Seoul, which has been around for more than 40 years. By Moon So-young

Ryu Jong-hyun, who runs Dae II Sa, an antique store near the Dapsimni subway station in central Seoul, recently displayed two small celadon perfume bottles from the Goryeo Dynasty. They were similar in shape and size and both were inlaid with flower patterns.

But one had red-colored accents on the patterns and a partly-broken neck, while the other was in perfect shape but lacking red patterns.

Which one should be more expensive?

The one with red patterns sells at around 5 million won ($4,800) despite its partly broken neck, while the other sells at around 600,000 won, Ryu said. “When a piece of celadon has red patterns, its price jumps,” he explained. “The red patterns are achieved from underglaze copper-spotting. It was high technology in that era and application of the technology was rare.” 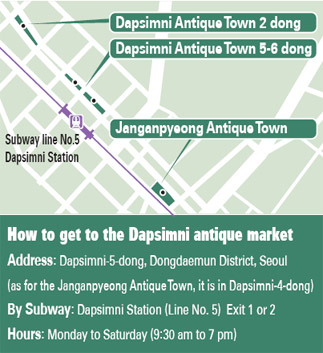 Visitors to the Dapsimni antique market can not only see or buy Korean antiques but also learn about traditional arts and crafts of Korea, and study their investment value as in the case of the rare bottles.

Visitors are allowed to touch the items on offer, handicrafts ranging from ornamental hairpins to wooden furniture. It’s also possible to have Korean items appraised, to see whether they are antiques or not.

The Dapsimni antique market, in Dongdaemun District, generally refers to about 120 antique stores in three buildings on the street behind exits No. 1 and 2 of Dapsimni Station on line No. 5 and in another building on the main street halfway between Dapsimni and Janghanpyeong stations.

The Dapsimni antique market gradually formed between the 1960s and 1980s, with antique stores from Ahyeon-dong and the Cheonggye Stream area moving in, according to the Dongdaemun District Office and store proprietors.

Partly because visitors to these antique stores have to enter the buildings first, the market is not as well known to the public as Insa-dong in Jongno District, where antique stores are accessible directly from the street. However, the scale of the Dapsimni market, with over a hundred stores and more than 300,000 antique items, is bigger than Insa-dong’s 60-some stores, according to the Dongdaemun and Jongno district offices. The Dapsimni market is gaining popularity among expatriates and tourists.

“Now this market seems to be better known to foreigners than to Koreans,” said Chang Ji-hong, who runs Gyeonggodang in the “6-dong” building among the three buildings near Dapsimni Station. “And I get surprised sometimes, as they have a deeper knowledge of Korean antiques than many Koreans.”

Wooden products of the late Joseon Dynasty account for a large part of the antiques in this market. Their prices vary. Oil lamps sell for 50,000 won ($47.96) and bandagi, or wardrobes that are hinged only on one side, sell from 500,000 won to 5 million won. Bitjeop, relatively small mirror stands inlaid with mother-of-pearl, sell for around 1.5 million won.

“Prices can vary depending on their condition, color and age, even for pieces of furniture of the same kind and same size,” said Kim Ji-hoe, who runs Nong Gyeong Mun Hwa, also in the 6-dong building.

Prices for wood furniture have been down 20 percent to 50 percent in the past two or three years, Chang of Gyeonggodang said, partly because imports from North Korea via China have increased. Today, many Korean antiques selling in Dapsimni and other South Korean antique markets are from North Korea, according to Chang and other store owners. They say that most antiques from South Korea have sold out.

“Antique imports from North Korea, that started in earnest about 10 years ago, have changed the price structure of the antique market,” said Sohn of Jangan Antique.

“The Korean antique market is somewhat slow these days as art collectors turn their attention to contemporary art and young people seeking things to decorate their homes or cafes take an interest in Chinese or Southeast Asian antiques,” he added,

Among Joseon Dynasty furniture, medicine cabinets are one of the steady sellers, several store owners said. Their numerous drawers contain different oriental herbs. Chinese characters written on the front of each drawer indicate the herb inside, creating a unique aesthetic effect. “That is around 100 million won and perhaps one of the most expensive goods in this shopping area,” Chang of Gyeonggodang said, proudly pointing out a big medicine cabinet in the corner of his shop.

Then, you can go to the “2-dong” building and buy a small medicine cabinet made of old wood for 250,000 won. Many stores in the 2-dong building sell recently made antique-style furniture of Korea and China.

There are stores in the 2-dong and “5-dong” buildings that sell recently made antique-style goods of Chinese design, while the 6-dong building and the building on the road toward Janghanpyeong Station have more stores selling original Korean antiques.

In Insa-dong the number of antique stores has declined in recent years, with some relocating to Samcheong-dong, said an official at the Jongno District Office.

Now, Insa-dong has more stores that sell handicrafts by contemporary artists that fuse traditional and modern techniques, rather than antiques.

“Still, Insa-dong comes to Koreans’ minds first when they talk about antiques in Seoul, not Dapsimni,” Chang of Gyeonggodang complained.