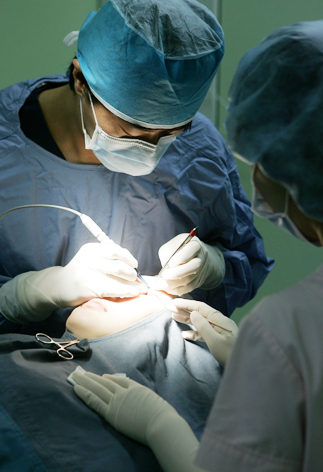 A plastic surgeon creates a double eyelid. By Jeong Chi-ho

A Vietnamese woman identified only by her last name, Dao, recently came to Korea to lend her aunt and older sister a helping hand.

They flew thousands of miles to have plastic surgery in a hospital in Sinsa-dong, in southern Seoul’s Gangnam District. Dao’s sister had her nose and chin reshaped, while her aunt had a facelift.

Dao, who was studying in Europe and is fluent in both English and French, provided interpretation and watched over the recuperation process. The surgeries cost $11,000, Dao said.

Speaking about why they came to Korea, Dao said, “It is not very common to have plastic surgery in Vietnam. Besides that, Korean plastic surgeons are famous in our country.”

Women, and sometimes men, who wish to improve their looks are flocking to Gangnam. They are mostly Korean, but some come from other parts of Asia and even North America. With patients from all over the world, Sinsa-dong hopes to become a worldwide hub for plastic surgery.

The number of plastic surgery hospitals concentrated in Sinsa-dong makes it at least the local leader in the industry.

However, this did not happen overnight. It was not until the 1990s that plastic surgeons started flocking to Sinsa-dong and the rest of Gangnam.

The street near Dongho Bridge in Sinsa-dong, Gangnam, is lined with plastic surgery hospitals. By Jeong Chi-ho

“In the 1980s, the centers of commercial activity and popular culture were still located in central Seoul, in places such as Myeong-dong and Jongno,” said Hong Sung-ho of Dr. Hong’s Plastic Surgery. Hong, one of the pioneers of plastic surgery in Korea, made a name for himself in the 1980s. “Those who wanted to have plastic surgery also went to Myeong-dong and Jongno. But in the 1990s, with Gangnam District becoming a new national trendsetter, trendy businesses started moving into the area and so did plastic surgeons.”

“That was also the time when having plastic surgery became common in Korea,” Hong added.

Plastic surgeries are costly so, Gangnam, especially Sinsa-dong, is a natural choice for plastic surgeons as it is the most affluent district in the country. The operations are not considered necessities, and thus, are not covered by insurance.

After Gangnam gained a reputation for plastic surgery, more surgeons opened hospitals there.

“For any type of business, there is an area where it is concentrated, and customers go there to get the services they want. With many customers going there, more who are engaged in that business move to the area,” said Kim Byung-gun, a plastic surgeon at BK Dongyang Plastic Surgery Clinic. “There is widespread recognition that for plastic surgery, you have to go to Gangnam. Thus, more plastic surgery hospitals opened up here.”

“If you want to treat a cold, you go to a hospital in your neighborhood. But plastic surgery is something that people have once or twice in their lives. Thus, people don’t mind traveling a long distance to find the right doctor,” Kim said. 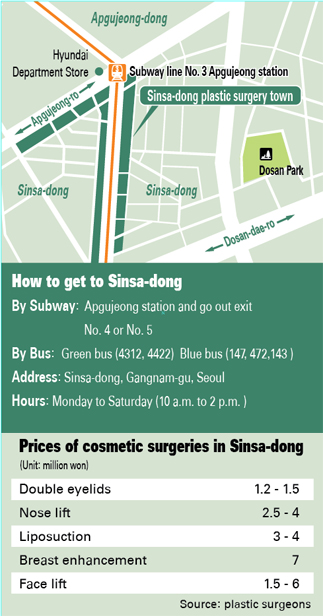 Plastic surgeons said that due to physical differences between Asians and Caucasians, they have differing demands. Asians want to make their facial and bodily features more conspicuous while Westerners want them less so.

However, Korea had to come a long way to arrive at its current status in plastic surgery. The nation’s first plastic surgeries were done by American surgeons who came here during the Korean War (1950?1953).

They did reconstructive surgeries on wounded American soldiers. One was Ralph Millard, who also operated on many Korean children with harelips, eventually developing the renowned Millard technique for treating the deformity. However, the country remained barren in terms of plastic surgery until the 1970s. People did not even know what plastic surgery was, and there was not even a medical discipline called plastic surgery until 1975.

“In the beginning, some doctors tried to imitate what Japanese plastic surgeons practiced. They even injected paraffin into noses and cheeks, but it had serious side effects. They had neither skills nor the right materials,” Hong said.

A Hong Kong Chinese woman identified only by her last name, Liu, had her nose done in a hospital in Sinsa-dong. Asked how she knew about the hospital, she said, “I was referred to a plastic surgeon by my friend, who also had an operation by the same doctor.”

“I don’t want anybody to know I had plastic surgery,” she said, explaining why she came to Korea. She also said she thought Korean doctors are better than doctors in Hong Kong.

According to a survey of 63 plastic surgery hospitals in Seoul by Yun Hyeong-ho, a senior researcher at Seoul Development Institute, 1,000 non-Korean patients had plastic surgeries in those hospitals in 2006. People of Chinese ethnic origin regardless of their nationality made up the largest portion of non-Korean patients. The most popular surgeries for Asians, including Koreans, are double eyelids, nose lifts, breast enhancement and liposuction, doctors said.

But there are many barriers Korea must overcome for it to truly become a hub of plastic surgery in Asia, not to mention the world. The biggest of these is language. It is too costly for hospitals to have interpreters on standby unless there are enough foreign patients, and individual patients can’t shoulder interpretation costs. Furthermore, under local law, hospitals are nonprofit organizations and cannot pay commissions to agents who introduce patients. The government plans to change related laws to allow hospitals to pay these commissions.

Another barrier is visa restrictions, especially for Chinese visitors. The government eased visa rules in April to make it easier for non-Korean patients and their families to enter and stay in Korea.