[Perspective]Of the harrowing and the gorgeous

[Perspective]Of the harrowing and the gorgeous 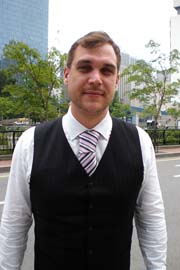 Living in Korea is like speeding down a highway; things move so fast that they’re past you before you really get a good look at them. Trends whip through the air like pages from a newspaper, pasting themselves to the windshield long enough to blare their message into your face, then flapping off and disappearing in the rearview.

Now, as we switch lanes from anti-U.S. beef hysteria to hypernationalist Dokdo drama without even doing a shoulder check, it can be easy to think that the road has veered off in the wrong direction.

Needing a rest stop from all this, I headed into the intellectual community this week to try and find some positive movement also underway.

I met with Gabe Hudson, an American author whose collection of short stories, “Dear Mr. President,” has received wide acclaim and been published in seven languages.

Having taught creative writing at Princeton for three years, he took up an assistant professorship at Yonsei University’s Underwood International College last year. His June article in the International Herald Tribune on the ups and downs of newbie life in Seoul sparked some lively debate on local blogs, foreign and Korean alike.

In his job, Hudson deals with the future elite of the country; Koreans who have gained a global perspective from living all over the world; and talented foreign nationals who chose Korea as their home. Hudson can’t speak highly enough of his students, and sees big things in the future for Korean creativity.

“The Korean imagination, based on what my students have shown me, is harrowing and gorgeous,” he said. (Yes, he speaks like a writer.)

He said that the writing he has seen here is completely new, and “feels more mature” than what his American students produced.

“This is a strange place with a lot of bizarre, tragic recent history,” he said. “Koreans tend to keep a lot of this bottled up. But given a chance to unleash it, something incredible comes out.”

Underwood College, where Hudson teaches with a selection of professors from the world’s top universities, is part of a push by big local schools to get themselves on the international radar.

“Korean universities now want to raise their ranking,” said Hudson. “They’re seeing that a homogenous staff is not to their benefit.”

Programs are also expanding to incorporate a broader approach to education, he said. Underwood offers a general liberal arts degree, for example, where rather than having to pick their major right out of high school, students are able to study a wider variety of subjects.

“You need to have the ‘liberal’ there,” added Hudson. “They would freak out if it were just called an ‘arts’ degree.”

As all these changes are being made over here, the West’s interest has already been piqued.

“The power structure is ebbing away from America,” he said. “The best schools in the West recognize they need relationships with East Asia. This is where all the action is going to be.

“Instead of sending Koreans to the West to get a first class education, their accomplishments will be such that people will be coming here to get a piece of that energy and creativity.”

And with that, it’s back onto bumpy old Beef and Dokdo Drive.