Why are the Dokdo islets so vital for Korea, Japan?

Why are the Dokdo islets so vital for Korea, Japan? 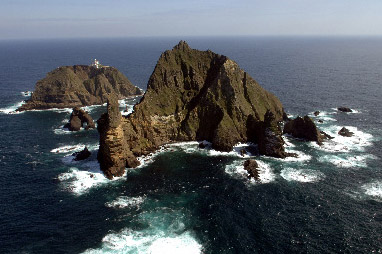 A bird’s-eye view of the Dokdo Islets. [JoongAng AIlbo]

If you read newspapers or watched prime time news on TV last week, there is one issue you’ve surely noticed: Dokdo.

These small rocky islets have long been occupied by Korea, yet are claimed by Japan. The issue has been one of the biggest political hot potatoes in Korea for decades, ever since Japan’s occupation of our country. The occupation ended in 1945, but the Japanese have kept insisting the islets belong to them.

Now Tokyo is indicating the islets belong to them in Japan’s new social studies guidelines for teachers. The political circus that has been repeated here for decades is back in Seoul all over again.

Since the news from Tokyo broke, people have held protests in front of the Japanese Embassy in Seoul, chanting slogans like “Dokdo is our land!” Some civic activists have cut their fingers to write an oath in blood, a practice often seen among older activists demonstrating patriotic zeal. Some demonstrators even killed green pheasants, Japan’s national bird, in protest, and thrown the dead birds into the embassy building. 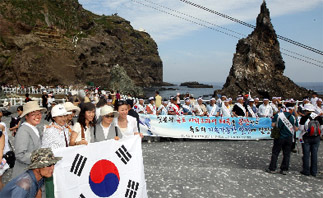 Korean tourists on the island on July 18.

But amid all this hubbub that is heating up the nation, there may be one fundamental question on your mind that you haven’t dared to ask ? Why do we care so much about the islets anyway?

What’s the big deal about the cluster of desolate rocks on the sea? Is there any particular reason we should risk so much to safeguard the remote islets at all cost?

The most obvious answer to these questions is that noble notion, territorial sovereignty. Sovereignty means controlling influence over an area, which is Dokdo in this case.

But the decades-long struggle to claim Dokdo may have a far more practical motive: abundant natural resources and rich fishing waters. 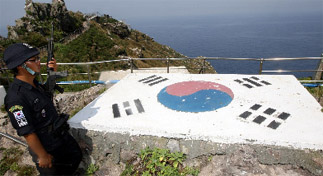 A rock face bears the Korean national flag on a lookout post where a Korean maritime policeman keeps watch. [YONHAP]

According to the Korea Ocean Research and Development Institute, the sea around Dokdo has abundant fish resources and also a massive amount of methane hydrate, phosphate rocks, natural gas, deep sea water and other precious mineral resources.

Methane hydrate is a very precious mineral commodity. By some estimates, the energy locked up in methane hydrate deposits is more than twice the global reserves of all conventional fuels (gas, oil, and coal) combined. Methane hydrate, also called gas hydrate, is a solid form of water that contains a large amount of methane within its crystal structure.

Japan and Russia are known to have conducted several rounds of scientific submarine investigations on sea areas in the East Sea around the 1970s. They reportedly discovered the presence of ample mineral resources buried in the sea.

Indeed, research on methane hydrate has increased in the last few years, particularly in countries such as Japan, which has become something of a leader in this field where in-depth research had not been conducted before.

The South Korean government belatedly took a plunge into the field, spending more than 3 billion won ($3 million) to conduct research in the deep sea around Dokdo and other areas of the East Sea.

Korean scientists in 2005 discovered about 600 million tons of methane hydrate buried south of Ulleung Island near Dokdo, an amount equivalent to 30 years of gas consumption in Korea and estimated to be worth more than 150 trillion won ($149 billion).

But mineral resources are only a part of what lie beneath the East Sea.

The East Sea is where the Tsushima warm current and the North Korea cold current meet, creating a deep current around Dokdo that is home to hundreds of varieties of plankton. As a result, the sea around Dokdo boasts a vast variety of fish, including salmon, trout, cold fish, mackerel pike and squid.

And the reefs under the sea also have various shellfish, such as turban and abalone shellfish, and seaweed.

According to the Ministry for Food, Agriculture, Forestry and Fisheries, local fishermen hauled in a total of 6,049 tons, worth 10.3 billion won, including 5,914 tons of squid worth 9.4 billion won, around Ulleung Island and Dokdo.

Speaking of sea resources, Japan and Korea have long had competing claims on the sea between Korea’s east coast and Japan as their own. Korea has long argued the sea is called the East Sea, while Japan has claimed it is the Sea of Japan.

The issue of Dokdo is also closely related to the debate over the East Sea, since whoever claims territorial sovereignty over Dokdo will have a better standing in the territorial debates over the sea.

But abundant minerals and fishing are not the only lures of Dokdo. The islets that lie in the middle of the East Sea between Japan and Russia have long been considered a strategic place for military outposts. In an indication of Dokdo’s military importance, Japan’s Foreign Ministry contended in 1904 that there was an “urgent need to incorporate the property [Dokdo],” ahead of the 1904-05 Russo-Japanese War. The ministry claimed Tokyo could use Dokdo as a military post to monitor movements of Russian sea vessels from Vladivostok.

Indeed, Japan soon incorporated Dokdo into Shimane Prefecture and installed a military outpost on the islets, which helped the country monitor the movements of Russian sea vessels. Japan won the Russo-Japanese War, and its victory in the war must have been another confirmation for Japan of the importance of the small islets.

The Korean government was also well aware of the military importance of the islets, installing a military communications base in Dokdo, where it can track and monitor military movements of the Russian, Japanese and North Korean navies and air forces.

Is it now clear why Japan has worked so hard to claim Dokdo?

To a strangers’ eyes, the islets may be just a bunch of rocks standing in the middle of nowhere in the vast sea. They may wonder why Koreans and the Japanese are so obsessed with the islets.

But Dokdo is not just a cluster of useless rocks, or just bait for politicians to stir nationalistic sentiment in each country.

Dokdo is a hot commodity with enormous economic potential and strategic importance, giving each country reason to fight for it.