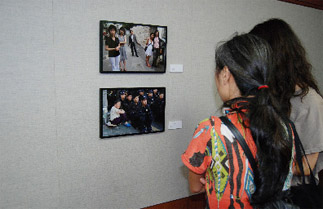 People look at photos exhibited to commemorate the 10th anniversary of GOAL. By Moon Gwang-lip

The faces of the women, either holding babies or pregnant, were hidden in the photos.

But as the artist intended, that made more conspicuous the sadness or shame the women may endure when putting their babies up for adoption.

The photos, taken by Lia Hyun-joo Barrett, 25, whose Korean name is Lee Hyun-joo, were part of an exhibition at Olympic Parktel in southeastern Seoul last weekend. The event showcased works by Barrett and five other Korean-adoptee photographers. It was held to mark the 10th anniversary of GOAL, which stands for Global Overseas Adoptees' Link, the biggest non-governmental adoptee support organization in Korea.

Barrett returned to Korea as an American. A Parsons School of Design graduate, she has taken many photos on the subject of adoption.

"I always wondered what my life would have been before my adoption, what my first mother looks like. It's an unanswerable path," she said. "It's also therapeutic for me."

GOAL was founded in 1998 by a small group of adoptees, including Mihee-Nathalie Lemoine, to help fellow adoptees like Barrett find their roots.

Many adoptees from Korea, called by some the "world's biggest child-exporting country" say they could not venture to their birth country without the help of an agency like GOAL.

Lemoine, a 40-year-old multimedia artist, was adopted to Belgium. She said GOAL's efforts over the past 10 years have been successful.

"We try to help them by providing every kind of service."

More than 300 adoptees from 15 countries came to celebrate the decade-long contribution by GOAL. The anniversary was marked alongside its annual conference.
The three-day event ran through Sunday and featured meetings and classes to help adoptees. It also had performances by adoptee artists, including Denis Sungho Janssens, a renowned classic guitarist who was adopted to Belgium.

Janssens attended the conference Friday after concerts in Europe.

"Without GOAL, all other adoptee organizations wouldn't exist. We are now in a strong network."