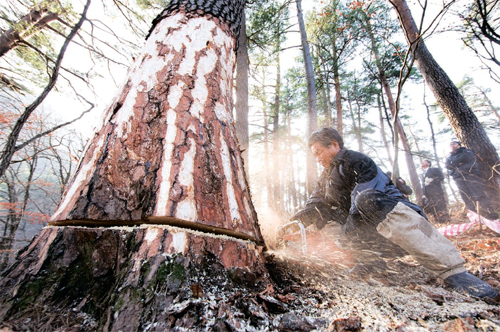 Lee Jong-ryeol, a lumberjack chops down a pine tree on Mount Hwangjang in Gangwon Province earlier this month. Selecting large, quality pines is crucial to the restoration of Namdaemun, Korea’s National Treasure No. 1.[JoongAng Ilbo]

Behind the high walls hiding the charred ruins of Namdaemun and all across the Korean Peninsula, preparations are well under way to restoring the National Treasure No. 1 to its former glory.

A group of the very best experts in the country are busy researching, organizing and gathering the necessary materials for the project.

Some of the most important ingredients are large pine trees. There aren’t many left, however; most of the biggest and highest-quality trees have been cut down over the years.

The best remaining specimens can be found in the windy, snowy reaches of the mountain ranges of Gangwon Province. The pines there have straight trunks and narrow annual rings, and the wood has a reddish tint.

The conditions in Gangwon are harsh and unfavorable. This slows the growth of the pines, which have a life span of around 300 years. But, this slow growth is the very reason these trees are of the highest quality.

While helicopters are used to move large trees in modern times, in the old days, transportation was no easy feat. To get the big trees out of the western regions of the country, they used to be carried to the Han or Nakdong River and then floated into the capital city. The wet wood would be stripped of its bark and dried for two to three years before being used in for construction.

Namdaemun, formally known as Sungnyemun, was the southern gate of old Seoul. It was destroyed by arson in February of this year, causing an outpouring of grief from Koreans. Many have stepped forward and offered to donate pine wood for the restoration project. Of the many trees put forward, a total of 167 from 12 locations have been chosen as finalists.

Doing some of the tree-chopping is Lee Jong-ryeol, a 55-year-old lumberjack with over 30 years of experience under his belt.

Cutting a down a tree that is over 100 years old and 15 times your size is a tough job. For Lee, it’s a battle. He believes you can’t be intimidated by the size of a tree, or else you won’t be able to win the fight. 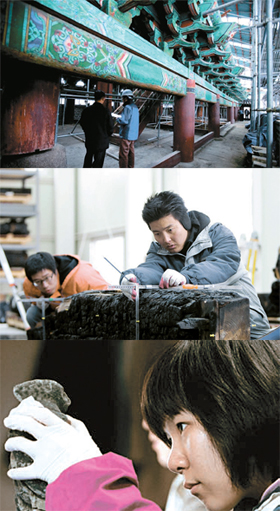 Many experts from diverse fields are involved in Namdaemun’s restoration. Burned wood and pieces of stone broken in the blaze offer clues to how the treasure can be brought back to life.[JoongAng Ilbo]

Lee chopped down three trees on this day, all over 110 years old. After all the preparations were complete, Lee poured a himself a bowl of makgeolli, or rice wine.

When he finished his drink, he chipped the bark away from the base of the tree with an axe and then got out his chainsaw. Back in the 1970s, before chainsaws were widely available in Korea, it took two full days to fell a sizeable tree. On this particular day, it only took Lee around 10 minutes. As the chainsaw roared, sawdust began to fly like snowflakes.

As he cut, Lee constantly looked up to check the direction of the fall. Getting the tree to fall the right way is key, as a bad angle of descent can damage both the tree and the surrounding woods. Experienced lumberjacks like Lee have an instinct for getting the tree to go down in a certain direction. Most high-quality trees, like the ones Lee cut on this day, grow on a slope, making them especially difficult to fell. Finally, with a mighty crack, the tree collapsed to the side.

Lighting a cigarette, Lee got philosophical about his job.

“I don’t feel good about cutting down these trees, but I do so thinking that they will be sent off to be used for a good purpose. They lived for a hundred years here, but I hope they can live another thousand years after their death,” said Lee. 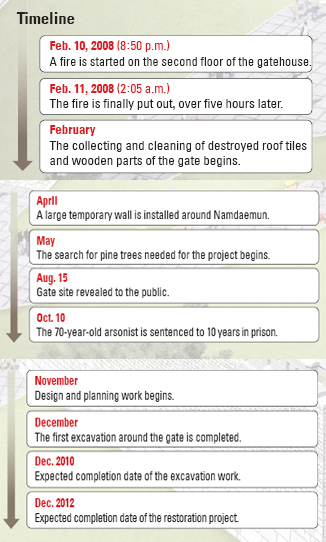 In over 30 years, Lee estimates he has cut down thousands of trees. The wood from those trees has been used in Changyong Palace and many other cultural restoration projects.

When the horrifying scenes of Namdaemun burning down played out on the evening news in February, Lee, like many others, was devastated, and immediately wanted to play a role in the restoration project.

One of the places to offer pine trees was the Jungyeong Tomb in the city of Samcheok, Gangwon Province, where Lee was working. The pines in the area are considered the best in the country. During the Joseon Period, they were reserved for the royal family for use in palaces and caskets. Pine trees from the Jungyeong Tomb were also used during a Namdaemun restoration project in 1961.

The job of cutting down 20 trees from the grounds around the Jung-yeong Tomb started on Dec. 17, and took two days to complete. After finishing his work for the day, Lee sat down for a shot or two of soju.

“It’s an honor to think that the trees I cut down are going to be used in the Namdaemun restoration project. I hope the project is a success, because that will mean that these trees can live a long life,” said Lee.

The actual construction work on the destroyed Namdaemun gate is slated to start in 2010. But before that, there is extensive preparation to be done. While it’s important to secure the best pines for the main frame of the gatehouse, there is a long list of other things that require just as much attention, such as the roof tiles, the tablet on the front of the gate and the colorful painted designs. The Cultural Heritage Administration has stated its intention to use the very best craftsmen and materials for each part of the gate, and to complete the restoration using traditional methods.

The roof tiles will be a big job. The old ones, over 95 percent of which were destroyed in the fire, were factory-manufactured tiles installed in 1961. The 20,000 new tiles are to be produced using traditional methods in order to replicate the originals.

The problem is that there are almost no artisans left with a knowledge of traditional roof tile-making using traditional kilns.

“Compared to factory-manufactured tiles, the handmade ones are lighter and have a unique look. However, there are only three kilns which can produce traditional tiles in the entire country,” explained tile-maker Han Hyung-joon of Jaewajang, who has been named Intangible Cultural Asset No. 91.

If tiles produced in South Jeolla Province are transported to Seoul, Han said, the change in climate can cause cracks.

Namdaemun’s tablet was salvaged from the fire, but did not come out unscathed. The restoration team has recently completed drying it, and gathering up the pieces and cleaning them off. The problem is replacing lost pieces and damaged borders.

“Using new wood in restoring the tablet can cause it to warp, so it’s best to use wood salvaged from the fire or old wood from other traditional cultural properties in our possession,” said Cho Sang-soon of the Cultural Heritage Administration.

The colorful painted patterns in the eaves and other parts of Sungnyemun are said to have changed during the 1961 restoration. Those doing the restoration will refer to old records and talk to artists who took part in the 1961 restoration work, in order to make the new paint job resemble the original as closely as possible.

A team is also working to piece together the stone animal statues that decorate the roof. There were a total of 68 statues, which are similar to Western gargoyles. One was completely lost in the fire, but about 80 percent of the remains have been pieced together. “It’s difficult to put small shattered pieces back in their original place. What makes the job tricky is that the statues differ slightly in shape depending on where they were located on the rooftop,” said Ahn Songi and Kim Ji-young of The Korean National University of Cultural Heritage.

Once all the sorting and piecing together is done in January, the team will move on to attaching the broken pieces using traditional methods. Some missing pieces will require the team to produce new parts.

Nearby, a team is working to heat and straighten the bent nails from the original Namdaemun. The work is tedious and repetitive, and Lee Eun-chul of the North Chungcheong Iron Museum, along with his apprentice, Lee Tae-young, only manage to produce 50 to 70 straightened nails per day.

While the fire has destroyed most of the wooden parts of the gate, a team is hard at work examining and tagging each burned wooden piece using radio frequency identification. The purpose is to figure out how much can be reused, and to provide the restoration teams with details on how Sungnyemun was built.

“It’s an opportunity for us to figure out the construction methods used on the gate that can’t be seen by looking at the outer structure. This work will provide important documents on the architectural style of the early Joseon era and Namdaemun,” said Ryu Sung-ryong of Korea University.