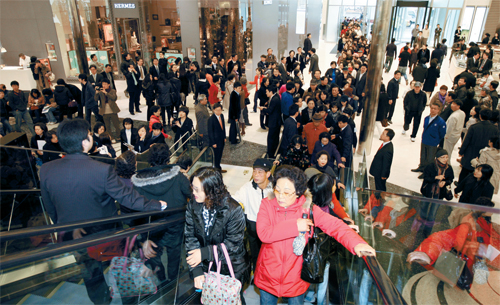 Customers crowd into Shinsegae Department Store’s Centum City branch yesterday for its grand opening. The department store is the biggest in Korea and includes a natural hot spring, ice rink and bookstore. By Song Bong-keun

“Almost all the red underwear in our store is sold out,” said one employee at the store.

In the southeastern part of Korea, especially among women, it’s traditionally believed that buying red underwear at a just-opened store and storing it in a drawer will bring good luck to the family.

Shinsegae’s Centum City branch was in fact open to the public for two days before the grand opening yesterday, part of a “pre-opening event.”

Over those two days, Shinsegae said that around 50 million won ($32,321) worth of red underwear was sold at the department store’s underwear booths, which feature brands such as Venus, Wacoal and Vivian.

Meanwhile, reports said that Homeplus, another retail operator, is planning to sue Shinsegae for violating the country’s land use laws in opening the new Busan branch.

Homeplus Centum City branch manager Yun Hyun-ho said that the Centum City area is a general industrial zone under the law, and thus it is forbidden to build a “discount store” there under Korea’s land use laws. Shinsegae Department Store in Centum City has a huge grocery on a basement floor.

The Homeplus Centum City branch had been the only discount store in the area.

Shinsegae said that they don’t consider their food outlet a “discount store” and that they have already gotten a permit to build their grocery from the Haeundae District Office.