Why are people encouraged to donate their organs?

Why are people encouraged to donate their organs? 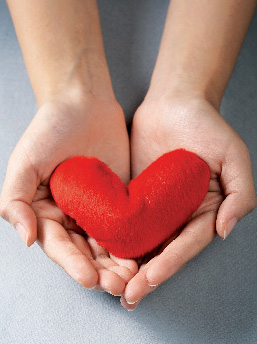 Last year, there were 14,000 people waiting for organ transplants.

Cardinal Stephen Kim Sou-hwan, one of Korea’s most beloved spiritual leaders, passed away in February, leaving behind a legacy of benevolence.

Throughout his life he encouraged people to love one another, and he often demonstrated how throughout his ministry. When he died, his last act, organ donation, expressed this love most profoundly.

Cardinal Kim donated his corneas so that a blind person may regain vision. His gesture of goodwill sparked an organ donation surge, among them, four people who donated their kidneys on March 11 and 12. A 53-year-old mother of two sons donated her right kidney to a male patient suffering from acute renal failure on March 19.

Interest in organ donation has continued to grow, and many want to know about the process involved in making such a personal gift. 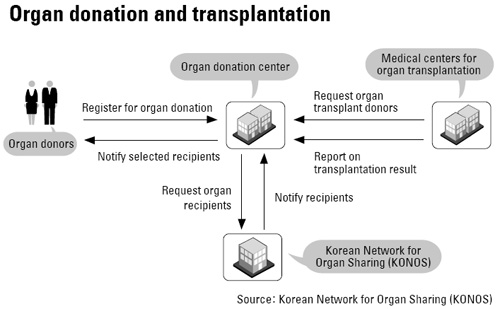 What is organ donation?

Organ donation is a life-saving measure in which healthy organs and tissues are removed from a person who has consented to give his or her organs for transplantation to another.

Brain death is a medical condition in which the brain is no longer receiving blood or oxygen and has been irreversibly damaged.

A person who is brain dead can donate his organs - heart, lungs, kidneys, pancreas, liver and corneas - to nine recipients at most.

Cardiac death is a condition in which heart and respiratory functions stop. In this case, the vital organs quickly become unusable for transplantation. But tissues such as the corneas, bones, skin and heart valves can be donated within the first 24 hours of death.

Healthy people can donate one of the two kidneys, one or two lobes of the liver, parts of the pancreas and intestines.

A living donor can also donate bone marrow, the soft tissue in the cavity of the bones involved in the production of blood cells in the body. The crucial element for bone marrow donation are hematopoietic stem cells, the immature cells from which all blood cells develop.

Patients suffering from leukemia can undergo blood stem cell transplant surgery as a form of treatment.

In the past, the bone marrow donor was put under anesthesia and the stem cells were taken through a needle placed into the donor’s pelvic bone. Today, the marrow is extracted via an intravenous needle injected into the donor’s arm.

Korea’s first organ transplant was done in March 1969 at the Catholic University of Korea, St. Mary’s Hospital, when a man suffering from chronic renal failure received a kidney from his mother.

Since then, over 20,000 organ transplants have been performed.

Though successful, that first operation gave rise to a serious problem. There were no laws governing organ transplantation or donation, and a black market for the illicit trading of organs developed.

But in the early 1990s, a host of private organizations aiming to encourage organ donation began to be established, significantly decreasing illegal trade in organs.

Reverend Park Jin-tak, who donated one of his kidneys in 1991 to a stranger, launched an organ donation movement when he established the Korean Organ Donor Program foundation the same year in Seodaemun, central Seoul. He is currently its general manager.

The following year, the Korean Network for Organ Sharing, Konos, was established to oversee the system.


How do you become an organ donor?

People who want to become organ donors can register with Konos or with 303 other institutions around the country, including the Korean Organ Donor Program, that are authorized by the government as organ donation registries.

Registration is done online or via mail and the personal information of all donors is saved in the organ donation center’s electronic database.

There are no special qualifications for registering as an organ donor, but the process does require prospective donors to undergo a medical examination to make sure their organs are healthy.

Donors who pass the exam get a certificate from the organ donation center verifying their donor status.

Young people can become donors, but need to have their parents’ permission. Adults are not required to obtain the approval of their families, but must notify them of their decision to become a donor or their organs will not be accepted for donation.

The number of people registering to become organ donors and undergoing transplant surgery has increased rapidly since the early 1990s.

Every year, around 1,000 patients who are on the waiting list die because they do not get transplants in time.

People are often reluctant to donate their organs because after brain death they do not want their bodies marred by the organ removal surgery.

In 2007, only three per million brain dead in Korea donated their organs. The figure is low in comparison with other countries. In Spain, the number was 31 and in the United States, 26.

The person who has donated the most organs in Korea is the late Marine Corporal Kim Gil-tae. After an accident when he was in training in August 1996, he was declared brain dead. Kim’s family decided to donate his organs so that Kim would not have died in vain.

The donation of Kim’s heart, kidneys, liver, corneas and bones have given new life to six patients.