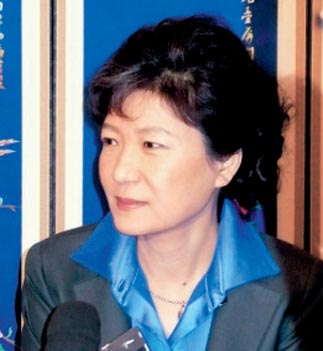 The rift within the Grand National Party widened yesterday after its former chairwoman, Park Geun-hye, publicly attacked the leadership of the country’s largest political party for blaming her loyalists for its plummeting popularity.

“What were the examples in which the so-called pro-Park factionists hindered party affairs?” Park asked yesterday during a press conference in San Francisco. “Do you think it makes sense that the party suffered the by-election defeat because of pro-Park politicians?”

Park, who is traveling in the United States, went on to say that the current discord is not something new.

“When I was chairwoman, there were still mainstreamers and non-mainstreamers, and tensions always existed,” Park said. “It’s wrong to make a fuss as if a rift has newly emerged.”

Her comments mark the first time that Park, the daughter of the late President Park Chung Hee, publicly spoke about the factional power struggle inside the GNP since the party’s crushing defeat in the April 29 by-elections.

After the conservative ruling party lost all five seats, the GNP leadership and President Lee Myung-bak admitted to the need to engage Park loyalists to mend the party rupture between pro-Lee and pro-Park factions. The split between the Grand Nationals started in 2007 with the presidential primary.

“Under my leadership, the party carried out drastic reform,” Park, who chaired the party from 2004 to 2006, said. “Now, the same reform measures are being presented again.”

Park has already turned down an olive branch offered by the pro-Lee faction when the GNP leadership made public a plan to name Representative Kim Moo-sung, a key Park aide, as the party’s new floor leader. Park has rejected the proposed political appointment, and the plan was shelved yesterday as Kim left for Turkey for talks with the country’s legislature on defense cooperation. “The situation has become undesirable, and I will stick to my original plan of not serving in the post,” Kim said.

With dim prospects for an easy reconciliation, reformist GNP lawmakers agreed Saturday on the need to hold a party convention as soon as possible to replace the leadership, worrying internal strife will lead to defeat in the October by-elections.

“We need a new leadership that can overcome the split between pro-Lee and pro-Park politicians,” Representative Kwon Young-se said.

Representative Nam Kyung-pil urged Park to run for the party leadership. “It is possible to hold the party convention as early as July,” Nam said.

Representative Chung Mong-joon, a member of the GNP’s highest decision-making body, the Supreme Council, said yesterday the plan for the convention is worth considering.

“But I think it’s only meaningful if candidates with leadership and influence such as former chairwoman Park run the race,” Chung said.